Not to re-litigate the Primary Wars — we’re in a snarky mood this morning — but Howard Wolfson tells ABC News that, were it not for John Edwards, Hillary Clinton would have beaten Barack Obama in Iowa:

Obama won 37.6 per cent of the vote. Edwards won 29.7 per cent and Clinton won 29.5 per cent, according to results posted by the Iowa Democratic Party.

“Our voters and Edwards’ voters were the same people,” Wolfson said the Clinton polls showed. “They were older, pro-union. Not all, but maybe two-thirds of them would have been for us and we would have barely beaten Obama.”

Iowa actually didn’t turn out to be that close, with Obama defeating Edwards by 7.9 points and Hillary Clinton by 8.1 points. For Clinton to have beaten Obama, she would have needed (as Wolfson correctly points out) about two-thirds of those Edwards voters.

The thing about Iowa, however, is that unlike virtually any other electoral contest, second choices matter, since Democratic caucus rules dictate that a voter may caucus for her second-choice candidate if her first choice does not achieve the 15 percent of the vote required for viability. As such, Iowa pollsters did a lot of work in trying to determine voters’ second choices. And in virtually every survey, Clinton did rather poorly as a second choice: an average of several surveys in December showed that she was the second choice of about 20 percent of voters, as compared with 25 percent for Obama and Edwards (an even later version I have sitting on my hard drive showed the second-choice breakdown as Edwards 30, Obama 28.5, Clinton 23.5)

So the odds are that, if John Edwards had dropped out on the morning before the Iowa caucus, Obama would have won by more points rather than fewer.

It was also the case that Barack Obama appeared to get the lion’s share of Edwards supporters once Edwards dropped from the race: 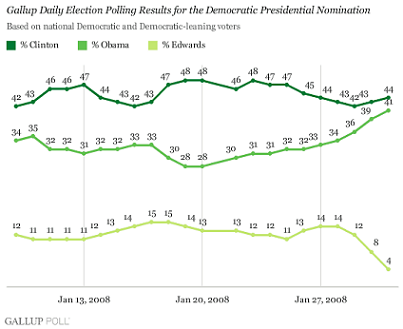 This is not to say that Edwards couldn’t possibly have impacted the race in ways that were favorable to Barack Obama. He was probably useful to Obama, for example, in attacking Clinton early on, increasing her negatives without Obama having to pay the price. His endorsement of Obama in May was undoubtedly a big assist to Obama’s endgame.

But Wolfson is making a much cruder sort of argument based on the polls, and the evidence cuts against him.