In 2021, nearly two dozen states passed new voting restrictions in response to the lie that widespread voter fraud cost former President Donald Trump the 2020 presidential election. Assessing the toll these laws take on the voting process is challenging, though. In Texas’s March 1 primary, for instance, more than 10 percent of absentee ballots were rejected, while turnout overall was in line with recent midterm years. But in Georgia’s May 24 primary, there was actually an uptick in early voting numbers from 2018.

In fact, early turnout in Georgia’s primary election set a record in the state for a midterm election, according to the office of Brad Raffensperger, Georgia’s secretary of state. And overall, unofficial election results show that over 1.9 million eligible Georgia voters cast a ballot this year in Georgia’s gubernatorial primary, compared to roughly 1.2 million who did so in 2018. As a result, some election observers and Republican officials are now dismissing the idea that restrictive voting laws will curtail voting, as Georgia has one of the most stringent laws on the books.

Writing off the effects of laws like Georgia’s at this early juncture is a mistake, however. As I wrote earlier this year, there’s conflicting research on the effects of certain voting restrictions, like stricter voter ID laws or limitations on absentee voting. Let’s unpack what happened in Georgia, though, to better understand why it’s important not to draw too many conclusions right now about the effects these laws will have.

First, many have pointed to high voter turnout in Georgia as proof that concerns around the state’s restrictive voting law were overblown, but remember: It was never a foregone conclusion that states with the most restrictive laws would see lower turnout. According to the secretary of state’s office, that early turnout marked a 168 percent increase from the 2018 primary.1 But higher turnout doesn’t mean Georgia’s law didn’t have an effect.

In fact, maybe turnout was high for the simple reason that there were a number of interesting races on the ballot. On the Republican side, for instance, the gubernatorial primary featured a showdown between Gov. Brian Kemp and former Sen. David Perdue, while the secretary of state primary saw Raffensperger, Georgia’s chief election officer, face a challenge from Trump-endorsed Rep. Jody Hice. Meanwhile, on the Democratic side, redistricting essentially forced Reps. Carolyn Bourdeaux and Lucy McBath to both run in the same district — the 7th. It’s also possible that the high number of GOP primary ballots was due, in part, to a number of Democrats voting in the Republican primary in an attempt to stop Trump-backed candidates from winning. In other words, it’s possible that turnout might have been even higher without the restrictions. We just don’t know.

What we do know is that research has found that strict voting laws can backfire and make people more determined to cast a ballot despite the hurdles set in front of them. Consider what happened in North Dakota in 2018. That year, Native American tribal leaders and field organizers concerned about turnout following the passage of a stringent voter ID law responded by rushing to print new tribal IDs. As a result, during that year’s fall midterm, Native American counties recorded historic turnout numbers. Some reporting suggests that Georgia Democrats carried out a similarly energized ground game. In Spalding County, for example, activists moved “Souls to the Polls” events to Saturday after the county’s board of elections banned early voting on Sundays. Other statewide voting rights groups similarly amped up voter registration and efforts to educate Georgians about how the new law would affect their ability to cast a ballot.

In other words, it’s possible that depressed turnout was avoided in Georgia only because campaigns and voting-rights groups spent a ton of resources to help people navigate the restrictions. But if Georgia’s restrictive voting law hadn’t passed, those resources could have been used elsewhere. 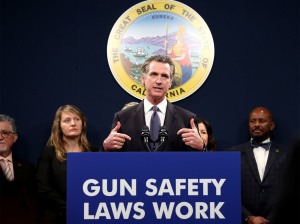 Why Most Gun Laws Aren’t Backed Up By Evidence

Another important beat to remember is that high turnout, or whether people voted, doesn’t give us the full picture of how hard it was for them to vote — and that matters, too. Research shows that if a person is truly motivated to vote, they will almost always find a way. But it’s still not ideal if they have to jump through hoops to do it. And as The Washington Post reported, some voters in Georgia were unwilling — or scared — to cast an absentee ballot given how the new state law makes mail voting harder by enforcing stricter ID requirements and limiting the number of drop boxes that can be placed in a county. Ultimately, that fear of ballot rejection, alongside new drop box and ID requirements, may have deterred even more voters from casting their vote this year.

Of course, this was still a primary, too, where the electorate tends to be both more experienced, engaged and partisan. So it’s unclear whether the existing state law will deter more voters in the general election, especially if they’re first-time or infrequent voters who are less familiar with navigating electoral administration.

But, in general, laws like Georgia’s were never going to have a large-scale effect on turnout or the horse race: It’s their effect on individual citizens that matters most. We’ve never seen such an aggressive and widespread GOP-led effort to pass anti-democratic voting restrictions, and the totality of the laws passed this cycle makes it hard to predict their effects. But even if, say, 100 people were disenfranchised because of the law — a number so small that it’d be a rounding error in the overall numbers — that still wouldn’t be fair to those 100 people.

Lastly, we still don’t have the official absentee rejection rate for Georgia. That’s a big piece of missing data that will give us a fuller picture of turnout, as well as the effect of Georgia’s election law — and other, similar anti-democratic laws that restrict absentee voting. We do have those numbers for Texas, of course, which were abnormally high compared with previous elections (e.g., there was a rejection rate of less than 1 percent for the 2020 presidential election, versus a 13 percent rejection rate in this year’s primary). But that said, those stats might overstate the effect of the laws. A spike in rejections shouldn’t be too surprising when a law recently changed how people are allowed to vote; it’s likely, too, that rejection rates in future elections will decline, as people get used to the new rules.

It’s important to remember, though, that you can’t out-vote or out-organize voter suppression tactics, and it would be disingenuous to say that the new restrictive laws had no tangible effects on voters since we just don’t know, for instance, how many people didn’t vote or experienced difficulties because of the new law. On top of that, since primary elections tend to draw highly engaged voters, it’s way too soon to draw any conclusions about the effects of these new laws. That means that the real test of these restrictions will likely come in November.