Other than the empty stadiums and a 21-year-old American suddenly looking like one of the best players in England, the Premier League’s “Project Restart” last season seemed a lot like the soccer that came before the coronavirus pandemic brought everything to a halt. The lack of fans and the addition of two extra substitutions were supposed to upend the traditional dynamics of the game. Instead, managers across England and the rest of Europe mainly refused to take advantage of their new tactical options. And although referees gave out fewer cards to away teams relative to home teams in a typical season, the performance of home and away teams didn’t change at all without supporters present.

The game of soccer seemed immune to the upheaval going on around it — and then the current season started. To put it in technical terms, the Premier League has lost its freaking mind. Everton, last season’s 12th-place team, sits alone in first place and is perfect through four matches. Aston Villa, which finished last season one spot clear of the relegation zone, beat defending champions Liverpool 7-2 on Oct. 4. (Yes, you read that right.) Manchester City, winners of two of the last three titles, is currently in 14th place. Manchester United, the richest club in England, is all the way down in 16th.

The chaos has been powered by a never-before-seen explosion of goals, mirroring the rise of offensive output we’ve seen in the NBA and the NFL. What’s causing the sudden shift? And should we expect it to last?

The average Premier League game this season has featured 3.79 goals per game. Per data from Stats Perform, that would shatter the previous record for a full season: 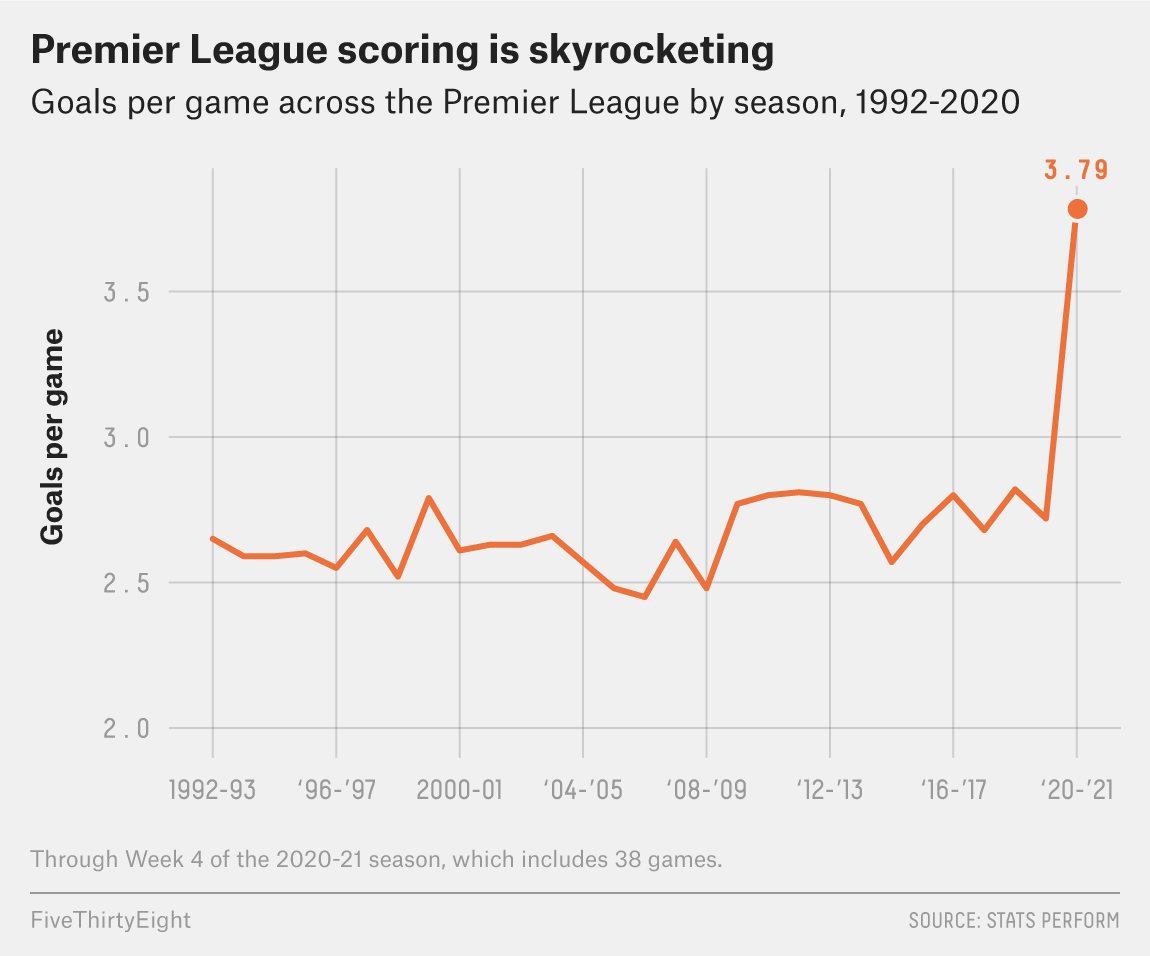 So … what the hell is going on? An obvious culprit is the increase in penalties awarded. Last season, the International Football Association Board introduced new, more clear-cut, much stricter handball rules. While Premier League referees essentially didn’t enforce the new regulations last year, FIFA has taken over the league’s application of Video Assisted Referee (VAR). With every potential offense now under an instant-replay microscope, the rate of penalties awarded has skyrocketed: It’s 0.66 per match this season, up from 0.24 last season and 0.27 the season before.

More and more of those penalties have come from handballs, too. According to data from the soccer consulting firm 21st Club, 24 percent of penalties this season were for handballs — up from 21 percent last year, 14 percent the year before that and 8 percent in 2017-18. The new rules and their sudden enforcement have required defenders to change the way they approach the game when they’re inside their own penalty area.

“We need to adapt to these rules,” Loran Vrielink, a private tactical coach for a number of top players across Europe, told FiveThirtyEight. He pointed to Inter Milan defender Stefan de Vrij. “Inside the penalty area, he’s always putting both hands behind his back. You need to do that. Otherwise it’s too easy to give up a penalty.”

It’s not just penalties, though. Per 21st Club, non-penalty goals per 90 minutes have also risen by 25 percent this season when compared with the average of the past four seasons — to 3.11 from 2.48.

Vrielink suggests that the lack of a typical offseason, combined with a muted in-stadium atmosphere, has made it harder for players to maintain their typical energy levels and mental focus for a full game. He thinks that’s led to more goals because a defensive lapse is much more easily punished than an attacking error.

“With a defender, one mistake, and it’s a goal, and you played a bad game,” he said. “That’s the cruel thing about football. You could not see a winger for a whole game, he’ll score a goal, and people will say he’s the best player on the field.”

The data lends some support to this theory. According to 21st Club, the number of fouls per 90 minutes this season (23.7) is up by two compared with last season and is at its highest since 2016-17. Thanks to the delayed finish to last season, there were also only 48 days between the end of the 2019-20 campaign and the start of the current one. To put that in perspective, the previous two offseasons lasted for an average of 89 days. It’s even worse for the players whose teams played in competitions that lasted beyond the end of the domestic season: About one-fifth — 21 percent — of the players who have appeared in the Premier League this season had 40 or fewer days between their two seasons.

But none of that explains the main driver of all the goals: Premier League attackers are as hot as they’ve ever been. The number of shots per game has actually declined by about a shot from last season to the current one, but a much higher-percentage of attempts are finding the back of the net: 12 percent of shots have turned into goals so far, compared to an average of about 9 percent for the previous four seasons. Teams are seeking out better shots — the average attempt in 2020-21 has an expected-goal value of 0.16, compared with an average of 0.14 from the previous four seasons — but even that discrepancy doesn’t come close to accounting for all the extra goals.

Despite all of these changing variables, the number of expected goals created over the first four weeks of a season has remained remarkably stable over the past five years. In fact, teams have created significantly worse open-play goal-scoring opportunities this season than in recent years past. This year, they just haven’t missed.

Unless there’s some MLB-esque ball-juicing shenanigans we’re unaware of or some global manufacturing malfunction for goalkeeper gloves, there’s no real feasible explanation for Premier League players suddenly outpacing a relatively accurate goal-scoring model by nearly 40 goals through just four weeks. Perhaps player fatigue is confusing the model, since this is the first global pandemic of the expected goals era, but not by this much. Instead, it’s likely that this is just a historic hot streak.

On top of that, the Premier League has asked the IFAB for permission to start interpreting the handball rule more subjectively. With regression to the mean likely for the leaguewide conversion percentage and with referees soon to stop calling so many handballs, the Premier League’s goal-fest might be over soon — if it isn’t already.

Ryan O’Hanlon is a writer and editor living in Los Angeles. He publishes a twice-a-week newsletter about soccer called No Grass in the Clouds. @rwohan