New York City is expanding its police department. Will that lower the crime rate?

That wasn’t the rationale offered by Mayor Bill de Blasio on Monday when he announced a budget deal with the City Council that would add 1,300 officers to the New York Police Department, a departure from the mayor’s earlier stance against increasing the force. (The department currently has about 34,600 uniformed employees, by far the most in the country, though not the most per capita.) He said the growth would mainly go to fight terrorism, to improve neighborhood policing and to save on the overtime costs that have come from stretching the existing force.

If the mayor had mentioned the goal of decreasing crime, that might have suggested he buys into the idea that crime is on the rise in his city. Whether that increase is real depends on how you measure it — as is the case in Baltimore — but it is true that murders and shootings are up.

But a recent study suggests that whatever rationale de Blasio uses for the budget deal, he might have the right idea: Increasing police-force size really could be a cost-effective way for cities to reduce violent crime.

The study, by Aaron Chalfin of the University of Chicago Crime Lab and Justin McCrary of the University of California, Berkeley, encompasses 50 years of data on police-force size and crime from U.S. cities. It found that each additional dollar1 spent on hiring police officers saves $1.60 in victimization costs.

The period it covers includes the recent downsizing in many large city police departments. The study, though, doesn’t necessarily argue for hiring more police officers in every U.S. city. New York City, in particular, is among the more over-policed cities, meaning it gets less benefit from each marginal buck spent on police. The finding also depends largely on how much value the researchers assign to a human life, a particularly dismal if necessary application of economics, and one that is heavily disputed. The study also doesn’t take into account some potential downsides of expanding police forces, such as a possible increase in cases of police misconduct.

The study, which has been conditionally accepted for publication in The Review of Economics and Statistics, used data from 1960 to 2010 for 242 medium and large U.S. cities. Some earlier research had also found benefits from expanding police departments, but generally didn’t cover such a long time period. Chalfin and McCrary examined how a city’s per capita officer count affected rates of crimes including murder, assault and burglary, after controlling for other variables including the local economy and high school dropout rates. The result: rising crime typically doesn’t lead to increases in police force, but adding police does, on average, lead to a decrease in a city’s violent-crime rate.

Is the increased expense worth it? Chalfin and McCrary say yes, on average. There’s a lot of uncertainty attached to the $1.60 figure. It depends largely on their estimate of cost — $130,000 annually per officer, based on increases in operational budgets when departments add officers — and their estimate of benefit. For the benefit of reducing most crimes, including rape and robbery, they used a 2008 study’s estimates. There are dozens of estimates, though, of how much saving a human life is worth, based on evidence such as surveys or observing human behavior and how much people will pay to increase their safety. The researchers found estimates ranging from $1 million to $28 million — which led to a range of estimates for how much $1 spent on police was worth, from 40 cents to $6. They settled on $7 million as roughly the average estimate for the value of a life, and $1.60 as the payoff.

That comes with several strings attached, though. First, more police means more incarceration. Adjusting for that, the payoff per dollar drops to $1.40. The estimate also doesn’t account for the possibility that adding police officers raises the level of police misconduct. That isn’t necessarily the case, Chalfin pointed out in an email: “In NYC, misconduct claims dropped a great deal in the last year after stop-and-frisk was ended, which may be a function of how officers are doing their job more than a function of manpower, which really didn’t change much.”

Speaking of New York City, there’s another caveat: The value of adding one officer depends on where he or she is hired. While saying an analysis by city “may be heroic,” Chalfin and McCrary try it, while acknowledging they’re assuming that the relationship between adding one officer and changes in the crime rate are constant across cities. They then adjust their calculation based on the cost of adding an officer and the underlying crime rate, and find that the benefit of an additional $1 spent on police officers ranged, in 2010, from 20 cents in Sunnyvale, California, to $14 in Gary, Indiana. The authors list only the top 30 and bottom 30 cities of the 242 in their study. New York City ranked 46th, meaning it had one of the lowest benefits per additional officer. Chalfin declined to provide the actual number for the financial benefit of additional spending on the NYPD, saying it could be misleading because it was based on the assumption that an average NYPD officer’s productivity was the same as any other officer’s nationwide.

“I think it would be a little misleading to report that number absent some strong prior about what the productivity of an NYPD officer actually is,” Chalfin said. “I think the statement I feel comfortable defending is that, on average, over the last five decades among medium-to-large U.S. cities, hiring additional police officers has a modest effect on crime rates. A 1 percent increase in the size of a city’s police force would reduce violent crime by 3-4 percent. We believe that such a reduction would be sufficient to make hiring more cops cost-effective.” 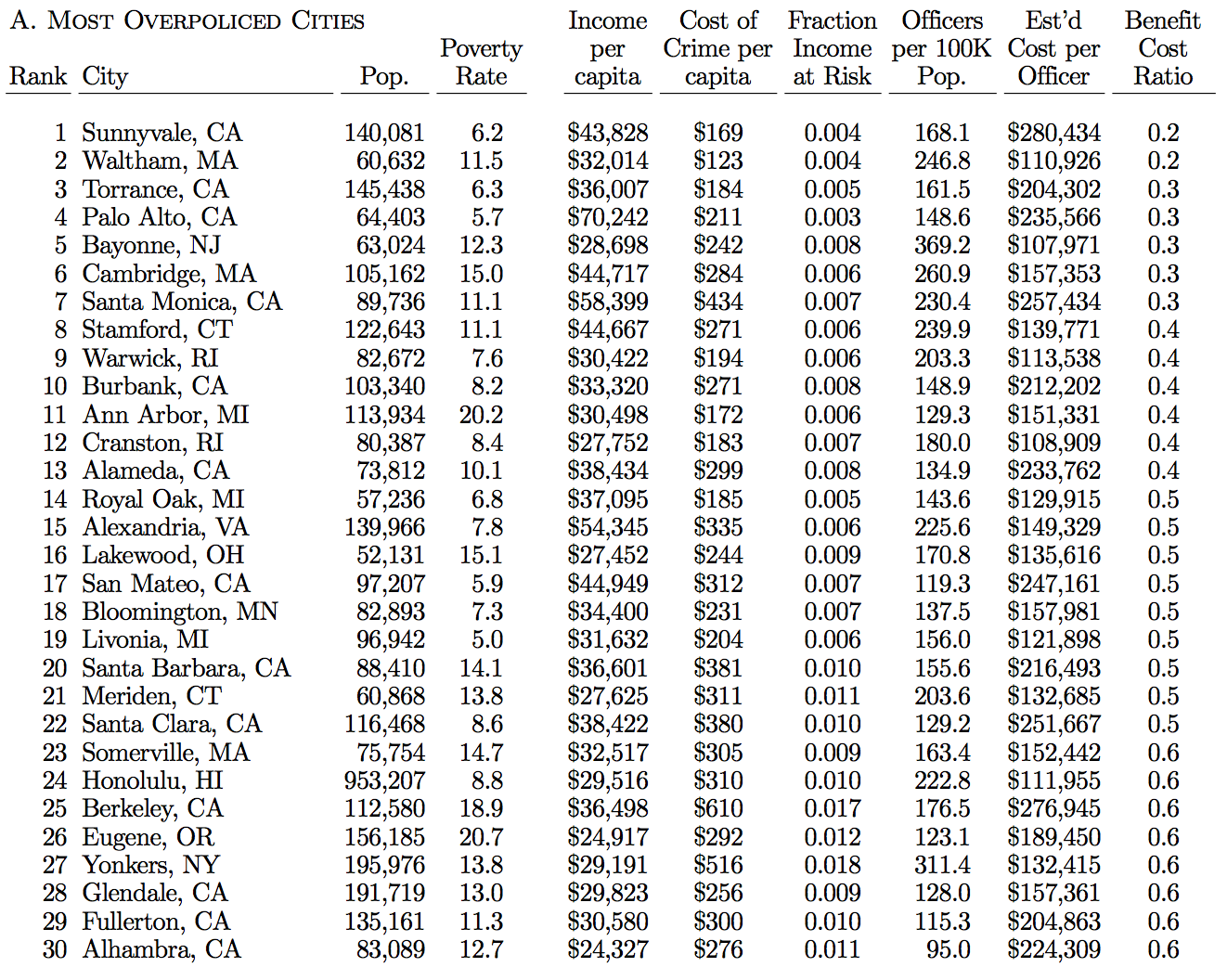 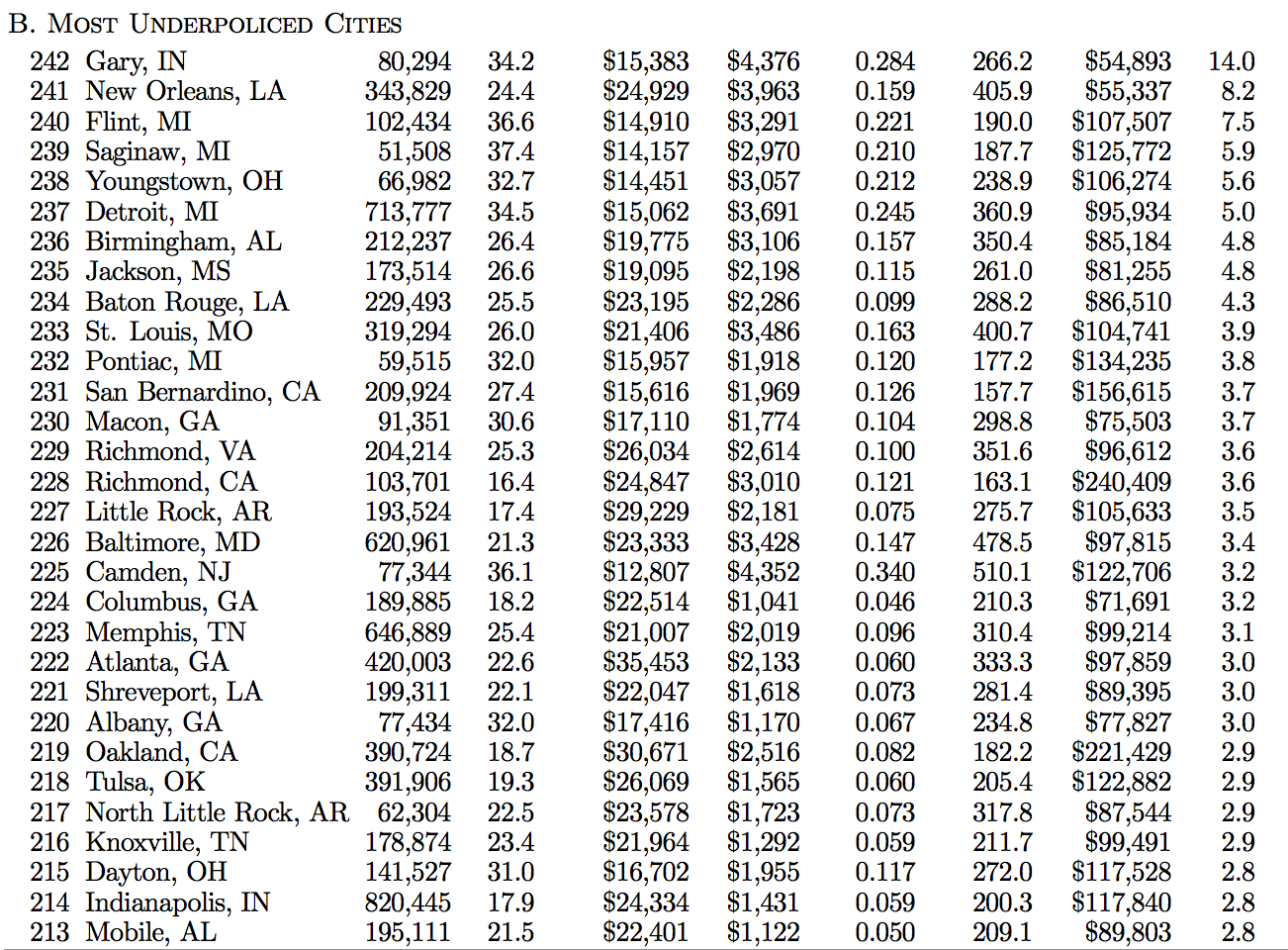