While the Republican primaries were still unfolding, the Obama campaign suggested it could compete in Arizona. That looks to have been a bit optimistic: polls show Mitt Romney leading comfortably.

But the idea that Arizona would be a battleground in 2012 made some sense. President Obama made substantial gains in the Southwest in 2008, carrying three of Arizona’s neighbors — Nevada, Colorado and New Mexico — that had voted Republican in 2004. Arizona was the exception, but Mr. Obama had a good excuse: there was an Arizonan on the ballot, Senator John McCain. 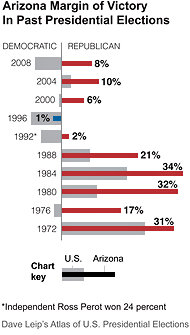 In 2012 that would not be an issue; Mr. Romney has a lot of “home” states (he was governor of Massachusetts, grew up in Michigan and has a vacation home in New Hampshire), but Arizona isn’t one of them.

In addition, Democrats have some advantages in the Grand Canyon State. It is almost one-third Hispanic, the fourth-highest share in the nation, and polls show Latinos favoring Mr. Obama over Mr. Romney by about two to one. Arizona is also the ninth-most-urban state by population, with a majority of its residents clustered in and around Phoenix.

Nonetheless, Arizona simply isn’t that near to the tipping point. In a presidential election that is at all close nationally — and the 2012 race is certainly close — Arizona is not a truly competitive state, yet. (More on that yet in a moment.)

Hispanics may comprise about 30 percent of the state, but they make up 25 percent of the state’s voting-age population, because they skew much younger than non-Hispanic whites. In addition, roughly one-third of Arizona Latinos are undocumented and cannot vote. Even among Hispanics who can vote, turnout has lagged behind that of non-Hispanic whites.

In percentage terms, Hispanics account for roughly half as much of the Arizona electorate, 16 percent, as they do the state’s overall population, 30 percent.

And even though the state’s Latino voters have helped move Arizona toward the political left, the state started far to the political right. Republicans carried Arizona in every presidential race from 1952 to 1992, the only state to stay Republican over that period. Arizona was home to Barry Goldwater, one of the most conservative Republicans to run for president since 1952. Mr. Goldwater exemplified the political ethos of the state: conservative, with a strong libertarian streak. 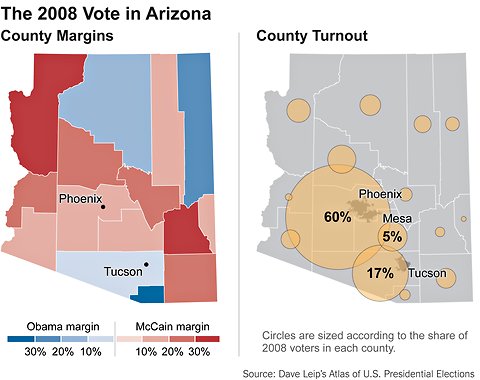 While Phoenix itself skews Democratic, most of the vast suburbs do not. “The East Valley — including Scottsdale, Chandler, Gilbert and Mesa — tend to be quite Republican,” Mr. Berman said. The East Valley also has a large Mormon community. (Arizona is the fifth-most Mormon state, but members of the Church of Jesus Christ of Latter-day Saints make up just 5 percent of the state over all).

The Republican Party also dominates in western and southeastern Arizona. Mohave and Yavapai Counties, in the northwest, are older, more rural, less diverse and more socially conservative than the Phoenix suburbs.

Maricopa County is so big that even though it leans Republican, Democrats get the bulk of their votes there, too. But the main Democratic-leaning county in Arizona is Pima County, which is more than one-third Hispanic and includes Tucson, where the University of Arizona is situated 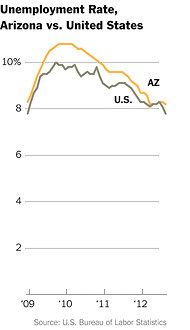 Maricopa County accounts for so much of Arizona’s electorate that it is almost guaranteed to be a good bellwether for the statewide vote. It was just one percentage point more Republican-leaning than the state in 2008 and was just two percentage points more Democratic-leaning in 2004 and 2000.

Mr. Romney is a 98 percent favorite in Arizona, according to the current FiveThirtyEight forecast. But the days when Republicans can count on carrying the Grand Canyon State may be numbered.

More and more voters are registering as independents. The number of unaffiliated voters has surpassed the number of registered Democrats and is soon expected to overtake the number of Republicans, Mr. Berman said. The ideological middle of Arizona’s electorate may also gain more sway if voters pass Proposition 121, an initiative on the November ballot that would replace the current party primaries with one primary open to all voters. In the open primary system, the top two finishers advance to the general election regardless of party.

But the most powerful potential factor pushing Arizona to the political center remains the state’s Latino population and the prospect that Latino turnout rates will rise. Even with depressed turnout, Hispanics doubled as a share of the electorate to 16 percent in the 2008 presidential election from 8 percent in 1992.

As in Texas, it’s long been predicted that this is the year Arizona Latinos will really go to the polls.

“Everyone’s been waiting for Latinos to flex their political muscle,” Mr. Garcia said.

The November elections may not draw a flood of new Latino voters, but there are reasons to expect an uptick. “The Hispanic population is much more mobilized and engaged, in part because of the anti-illegal immigration campaign that was for a couple years the thing that got the Republicans going here,” Mr. Merrill said.

Latino voters have also been energized by the push to pass the Dream Act for undocumented young people and Mr. Obama’s decision to stop the deportation of young undocumented immigrants under certain conditions, Mr. Garcia said.

Signs of an energized Hispanic electorate are apparent in the Democratic Senate candidate Richard H. Carmona‘s surprisingly strong campaign against Representative Jeff Flake, who was thought to have the seat of Senator Jon Kyl, who is retiring, locked up. Arizona hasn’t had a Democratic senator in almost 18 years.

Mr. Carmona, who is Puerto Rican, is currently a modest underdog in the FiveThirtyEight forecast; Mr. Flake is a 69 percent favorite. But “the Carmona-Flake race is an interesting example of Arizona starting to moderate a little bit,” Mr. Cieslak said. “It’s going to come down to the wire.”

If the Republican Party does not improve its standing among Hispanics, it seems almost inevitable that Arizona will become substantially more competitive. Hispanics will make up one in four registered voters by 2030, according to an analysis by the Morrison Institute for Public Policy.

“I think this is the last election you could win without the Latino vote,” Mr. Garcia said.