Sen. Elizabeth Warren has moved into the top tier of the Democratic primary field in national polls, joining former Vice President Joe Biden. Further, she leads in Iowa and New Hampshire and raised more than anyone except Sen. Bernie Sanders from July through September.

And yet, according to our endorsement tracker, Warren isn’t getting much support from Democratic Party elites, such as elected officials and members of the Democratic National Committee. In fact, she doesn’t just trail Biden in endorsement “points” by our metrics, but also Sens. Cory Booker and Kamala Harris, who are both well behind her in polling and fundraising. Warren is fifth in endorsements from Democratic state legislators (behind Biden, Booker, Harris and Sanders), according to research by Boris Shor, a political scientist at the University of Houston. And it’s not just that Warren is getting stiffed by more centrist Democrats who might disagree with her on the issues: Reps. Alexandria Ocasio-Cortez of New York and Ilhan Omar of Minnesota endorsed Sanders last week.

No one is getting many endorsements

This is probably the simplest and best explanation. The clear leader in endorsements is really not Biden, but “undecided.” 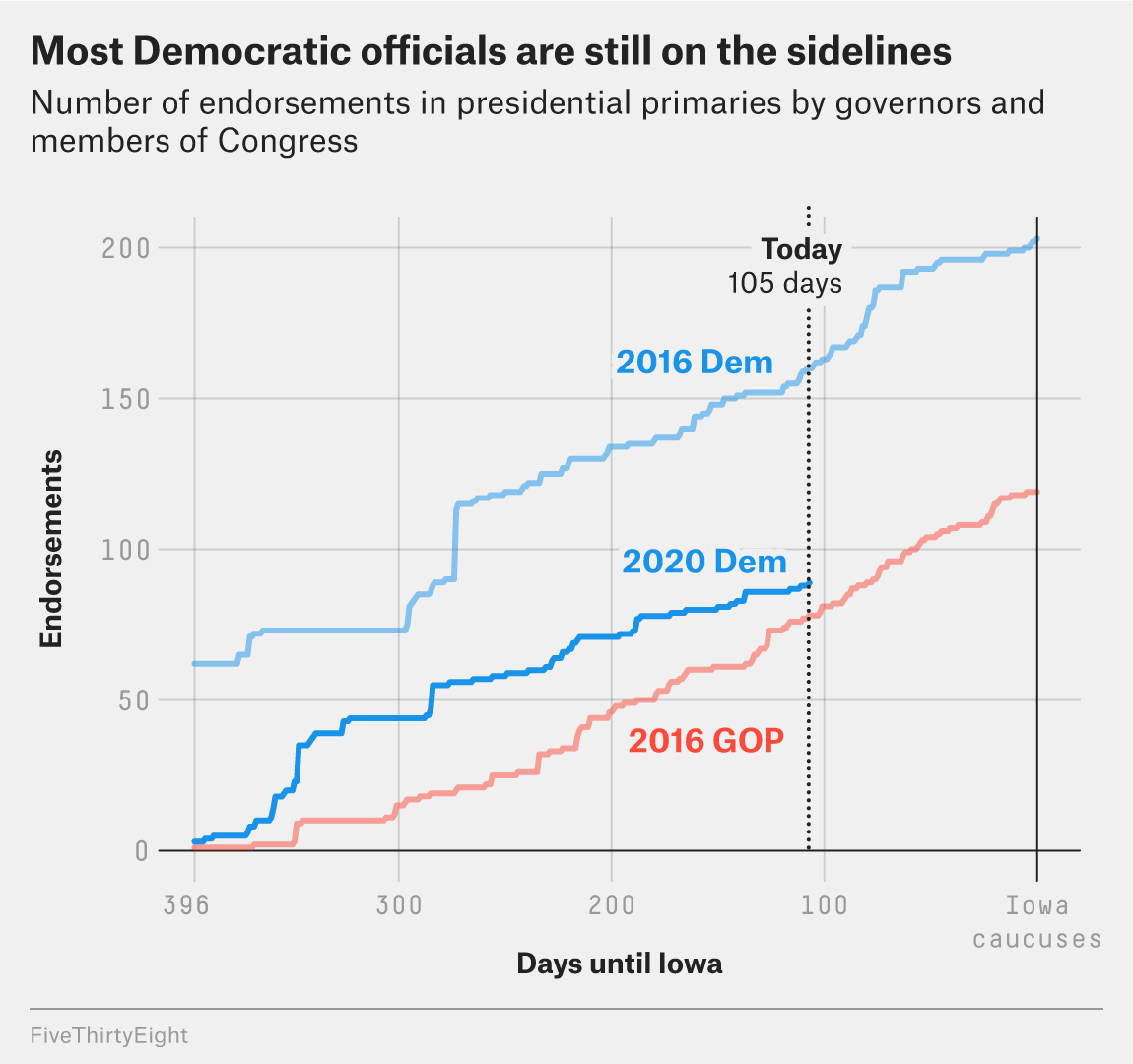 So a big part of the story here may be less about Warren and more about the large Democratic field and the lack of a clear front-runner, just as it was with Republicans in 2016. The big field, in particular, creates incentives for elected officials to remain neutral for as long as possible.

“For the faction of elected Democrats who want the party to move to the left, the fact that both Warren and Sanders are in the race and polling in the double digits makes it tough — and somewhat politically risky — to publicly choose between them at this point in the process,” David Hopkins, a political scientist at Boston College and co-author of “Asymmetric Politics,” said.

Or take members of the Congressional Black Caucus and Congressional Hispanic Caucus. “At this stage,” Hopkins said, “with Harris, Booker, and [Julián] Castro in the race and many of their constituents backing Biden, these members have other considerations besides candidate ideology — both in terms of their own personal objectives and their political incentives. Again, a wait-and-see strategy seems much safer.”

Democrats may also be gun-shy after the outcome of the 2016 election. Hans Noel, a scholar at Georgetown University and co-author of “The Party Decides,” said of party elites: “They controlled the process, and they lost.”

“They were also criticized for favoring Clinton,” he added. “I don’t think that Clinton’s losing means they made a mistake in favoring her, but I think most party activists aren’t so comfortable with that interpretation.”

The party elites are wary of Warren

Warren has two obvious problems with party elites. First, there is the perception among some of them that her left-wing stands, such as Medicare for All, are too risky for the general election and decrease the party’s chances of defeating President Trump. For example, House Speaker Nancy Pelosi has not outright endorsed Biden or specifically declared that she does not support Warren, but Pelosi has argued that the party needs to have a big, sweeping electoral victory in 2020, and that such a win requires more moderate policies, like focusing on improving Obamacare instead of pursuing Medicare for All. Those are sentiments decidedly on the side of Biden and Mayor of South Bend, Indiana, Pete Buttigieg and against Warren and Sanders.

Secondly, electoral considerations aside, there is a center-left wing of the Democratic Party that fundamentally disagrees with Warren’s more leftward positions. It’s hard to imagine some of these figures endorsing Warren before she has effectively already won the nomination. (That fits with Shor’s findings — Warren’s endorsers at the state legislative level are more liberal than the endorsers of any of the other candidates.)

These problems are not unique to Warren. Sanders was perceived as too far to the left by many Democratic elites in 2016; he got very few endorsements back then and is not getting many this cycle, either. (Sen. Amy Klobuchar actually leads Sanders in endorsement points.)

Warren also has a third challenge with party elites that is less obvious. The Massachusetts senator clashed with senior aides to President Obama for much of his tenure in the White House. She, like Sanders, isn’t quite in line with the party’s establishment. A Warren administration would probably be less likely to hire former Clinton (Bill and Hillary) and Obama aides in key posts than, say, a Biden, Booker or Harris one. So people connected with the party establishment (like many DNC members) may be fine with Warren but prefer other candidates for more self-interested reasons.

For a variety of reasons, we opted not to track endorsements from groups (as opposed to individuals). So that leaves out, for example, Warren winning the backing of the Working Families Party, a liberal activist group that has chapters in 15 states and is influential in places like New York. Several of the other candidates, including Sanders, pushed hard for that endorsement, and it may be more valuable than the backing of a handful of members of Congress.

A strict count of formal endorsements also leaves out less official institutional support. The liberal activist groups under the broader “Indivisible” umbrella, MSNBC (particularly its more left-leaning hosts like Rachel Maddow) and Pod Save America aren’t likely to endorse a candidate in the Democratic primary. But the general ethos of those organizations is closer to “Republicans are morally bankrupt and must be confronted aggressively,” than “Democrats can work with Mitch McConnell.” (Biden hints at the latter, Warren the former.)

Lara Putnam, a historian at the University of Pittsburgh who has studied Democratic activist groups like Indivisible that have emerged after the 2016 campaign, says that many individual Indivisible chapters don’t want to formally endorse a candidate in the primary. They fear endorsements would create divides and make it harder for those groups to unify for the general election. But Putnam also says that many of the activists involved in post-2016 anti-Trump organizing are backing Warren. And they are acting on that support through, say, Facebook groups that are separate from the respective larger anti-Trump groups these activists are also affiliated with. (An informal August poll done of its members by national Indivisible also showed Warren as the activists’ favorite.)

“Warren has a large number of potentially very influential supporters in the local grassroots space, and they are also the people most opposed to using public endorsements as a means of pressure to shape [the] primary contest,” said Putnam.

Similarly, we are tracking the designated Democratic leader in state legislatures around the country, so we counted Georgia House Minority Leader Robert Trammell’s endorsement of Harris, for example. But the endorsement of Warren by Lorena Gonzalez, a rising star in the state House in California, a hugely important primary state, isn’t captured in the FiveThirtyEight tracker, even though Gonzalez’s backing may be more significant than Trammell’s. Molly Kelly, who was the Democratic nominee for governor in 2018 in New Hampshire, is also backing Warren; that’s another fairly high-profile endorsement that doesn’t fit our metrics. Warren has the most endorsements from state legislators in Iowa, which might be more significant than federal legislators or state legislative leaders.

Does Warren’s lack of endorsements matter?

Trump won in New Hampshire, South Carolina and Nevada in 2016 and was well on his way to the GOP nomination before even a single Republican in Congress endorsed him. So in the anti-elite, anti-Washington, anti-establishment environment we are in right now, Warren might be better-off without a lot of endorsements. Another part of the story could be that the Warren campaign isn’t pushing particularly hard — or at least not as hard as other campaigns — to get endorsements from officials outside of the early primary states.

“She has little public support from party leaders, yet she’s in an increasingly strong position with liberal activists and the party grassroots and is pushing into a national lead among Democratic primary voters,” said Hopkins. “That in itself suggests that endorsements have limited value for candidates, perhaps especially for candidates like her who are presenting themselves as populists.”

He added: “We’re in an age when traditional party networks matter less in nominations and media presence matters more, so it just may not make much difference to voters who their member of Congress or state legislator tells them to vote for.”

Maybe. But we haven’t yet had a recent Democratic presidential primary with a nominee strongly opposed by the party elite. In fact, you could imagine a nightmare scenario for Warren, because of this lack of elite support. Let’s say she wins in Iowa and New Hampshire. Black and Latino members of Congress, still wary of her, downplay those wins by arguing that both came in heavily white states that are unrepresentative of the broader Democratic electorate. Someone like Obama, Pelosi or one of the Clintons says publicly, “A second term of Trump would be an existential crisis for America, and I’m worried that a candidate supporting fairly controversial policies like Medicare for All makes that more possible.” And in that scenario, maybe key figures in the party like David Plouffe, the manager of Obama’s campaign, endorse whichever more moderate candidate seems most viable at that point (likely Biden, Buttigieg or Harris.)

The potential danger for the Massachusetts senator is that “party elites lukewarm about Warren” turns into “party elites organize to stop Warren.” And perhaps Democratic voters care more about the views of their party’s elites than Republican voters did in 2016.

Even if that does turn out to be the case, however, Warren, well, seems to have a plan for that. The Massachusetts senator is reportedly privately talking to party elites, emphasizing that she is a team player and will take into account what’s good for the overall party if she is the Democratic nominee. That outreach, according to NBC News, includes regular contact with Hillary Clinton. That sounds like exactly what a candidate who wants to be accepted by the party establishment down the line, even if that establishment won’t embrace and endorse her right now.