When the House of Representatives convenes tomorrow, it will contain 39 African-American members, not including non-voting delegates in places like the Virgin Islands and the District of Columbia. This number, representing about 9 percent of the Congress, falls somewhat short of the fraction of African-Americans in the population as a whole — a truly representative House would have about 55 black members — but perhaps not dramatically so. The situation at first glance would appear to be much better than it was prior to 1990, when there were generally only about 20 black members in the House at any given time.

The districts these 39 Congressmen serve, however, are not very representative at all. All 39 contain a higher percentage of African-Americans than the population as a whole, ranging from Keith Ellison’s district in Minneapolis, which is just barely more black than the national average, to Jesse Jackson Jr.’s on the South Side of Chicago, which is 68 percent African-American. About 64 percent of the members — 25 of 39 — come from districts that contain an outright black majority. The districts are also much more Democratic than the country as a whole, with an average PVI of D +25; only Sanford Bishop’s district in Georgia, which has a PVI of D+2, is anywhere close to the national average.

The chart below estimates the percentage chance that the Representative in a given Congressional District is black given the African-American population in that district, as based on a logistic regression. The chances of having a black Representative are virtually nil until the African-American share of the population hits 25 percent, at which time it begins to accelerate rapidly until the black population hits 60 percent, after which point having a black congressman is virtually certain. 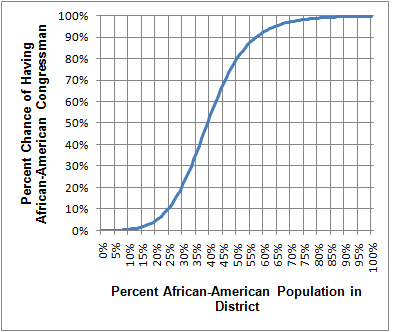 The problem with this is that, while there are a decent number of Congressional Districts that have African-American populations of 25 percent or more, only six states do, and five of the six are culturally conservative areas in the Deep South. Suppose that we treat each state as though it were a Congressional District and evaluate its chances of having a black congressman based on two factors: its African-American population and its Partisan Voting Index.

If the states were Congressional Districts, then the most likely one to elect a black Representative would be Maryland, which nevertheless has only a 15 percent chance of doing so. All other states are below 10 percent, and in most cases, the probabilities are very small indeed.

Of course, the states are effectively big Congressional Districts for purposes of electing senators and governors. Suppose you added up the probabilities of each state electing a black congressman, and then multiplied it by two since each state gets to elect two senators. How many black senators would you expect? You’d expect there to be about one — or more precisely, 1.2. And you’d need to halve that number to estimate the expected number of black governors, which would be 0.6.

If one looks at the composition of the House of Representatives, then, one shouldn’t be surprised that there are so few black senators and black governors, because states are far more heterogeneous (racially and otherwise) than individual Congressional Districts, and African-Americans are by and large not getting elected to the House outside of a certain number of highly black, largely homogeneous, and often heavily gerrymandered Congressional Districts in the urban North and the rural South.

The question, of course, is why African-Americans aren’t getting elected in these districts. Racism is undoubtedly part of the answer, but it probably can’t be a complete one now that the country has just elected Barack Obama to the White House.

It would be helpful to know where in the chain the link has been broken. Are African-Americans declining to become candidates in swing districts? Are they becoming candidates, but losing their party’s nomination? Or are they winning the nomination, but losing in the general election? I don’t have this sort of information handy, and so I cannot say for sure.

I suspect that a lot of the problem, however, is that as Congressional Districts have become more and more gerrymandered, leading to the creation of more and more majority-minority districts following the 1980 and 1990 censuses, the black political apparatus has become more and more ‘ghettoized’. Black candidates have not had to develop a message that appeals to white voters, because most of them don’t have very many white voters in their districts (about half the nation’s African-American population is limited to the 60 blackest Congressional Districts). Nor do they have very many conservative voters in their districts, and so they have not had to develop a message that appeals to conservatives, even though the black population itself is far more diverse in its political views than is generally acknowledged.

Because they are not very representative of their states as a whole, moreover, these districts are also not likely to be very good launching pads for ascension to the Senate or to the governor’s mansion. Do I think Jesse Jackson Jr. would have some trouble winning statewide office? I do — but I also think that Pete Stark, who lives in a mostly white and Asian but extremely liberal district in the Bay Area, would have trouble becoming a senator in California.

Conversely, of course, the majority-minority districts drain black voters from surrounding districts, and so white politicians have not had to develop messages that appeal to black voters. This may be particularly problematic for Republicans, who went from winning 16-18 percent of the black vote for the Presidency in the 1970s to only about half of that now.

Democrats ought to be mindful of these things when redistricting occurs again after 2010, aggressively challenging Republicans on both the wisdom and the legality of creating ghettoized Congressional Districts. Majority-minority districts harm Democrats by creating surplus Democratic votes, and in the long run, they probably hurt African-Americans too.