Like many of you, I’m watching bits and snatches of these town halls broadcast on C-SPAN and elsewhere. I see a lot of elderly people shouting into microphones about “socialism,” their fear of big government, and the importance of fiscal responsibility. Elsewhere, other seniors are complaining because in 2010 they aren’t going to receive their familiar, cost-of-living adjustments for Social Security, while still others are fretting aloud that the federal government–which happens to run Medicare–shouldn’t, um, be meddling with Medicare. A recent Pew poll revealed that 53 percent of seniors are worried that government is becoming “too involved in health care,” a much higher share than those under 30 saying the same.

I’m 42. So maybe my mind will change on this as I age, but can those of us who are still working and paying premiums into OADSI and Medicare get a break here? 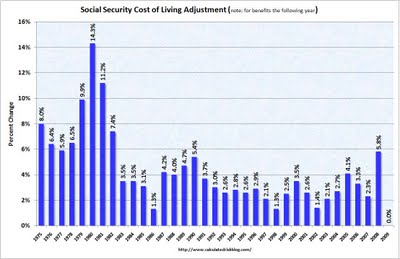 For starters, it’s true that the Social Security benefits will not increase for 2010, but neither will they decrease. And, given that the year-against consumer price index dropped, maintaining the same benefit levels actually has the net effect of a raise in real terms. And yet, we hear complaints that there won’t be an increase.

Now, one might counter that, for some things, prices are increasing for seniors–“things” like health care. So we need to make sure seniors have their Medicare, right? I’m fine with that, but let’s keep in mind that current retiree-recipients will receive Medicare benefits that, on average, exceed what they ever put in, even when you adjust for inflation. American Enterprise Institute scholar Andrew Biggs makes a powerful point when he calculates that “a typical person who was born in 1944, began work at age 21 in 1965, and in 2009 retired at age 65 and enrolled in Medicare,” and who then draws the typical benefit until death at age 83, will have paid roughly $64,971 in Medicare payroll taxes during his/her lifetime but received around $173,886, for a net of “$108,915 more in benefits than he paid in taxes over his lifetime.” Hey, that sounds like socialist-style redistribution to me! 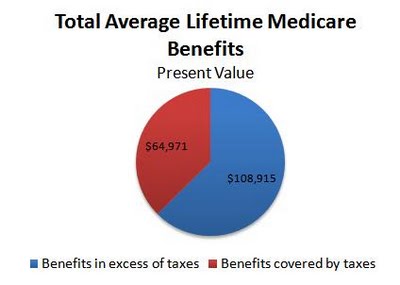 Which brings me to my next point: Although the redistributive effects of Social Security and Medicare are to some degree intragenerational, a lot of the redistribution works intergenerationally. Because it’s intergenerational–specifically from younger Americans/workers who have paid into these programs at higher tax rates than their parents and grandparents–and because each new American generation is less white than the previous one–such redistribution also has a racial effect. Moreover, as a result of different life expectancies, even the intragenerational redistributive effect has a racial element: Cato’s Michael Tanner explains in his 2004 book, Social Security and its Discontents, because of different life expectancies, the typical black man will receive on average about $70,000 less than a white man, and even if the white man and black man both reach age 65, the disparity still remains about $25,000.

So you’ll pardon me if I’m unmoved by the complaints of some (not all: some) of these seniors standing up in town halls to warn ominously about big-government socialism at the same time they are benefitting from, well, big-government socialism. That some of the white seniors (again, some) are also echoing falsehoods about illegal immigrants (translation: non-whites) receiving benefits in a country where the younger, less-white generations are redistributing income from their hard labors to pay for the retirements of their whiter elders–especially when many of those immigrants, legal or not, pay into Social Security and Medicare and may never receive their contributions back or have a chance to later obtain benefits–is especially galling.