One-way conversations make bad journalism. A debate with our readers about an article is great, but it’s even better to hear input about what makes for interesting topics before we start writing. So, we’ll regularly ask you, what topics do you want addressed on DataLab? When we posed this question via Twitter on Thursday, one idea seemed popular (judging by the number of favorites it got), and it also seemed semi-answerable:

It’s an important question, too. The Centers for Disease Control and Prevention (CDC) has classified insufficient sleep as a “public health epidemic,” citing a higher risk of “motor vehicle crashes, industrial disasters, and medical and other occupational errors,” as well as health problems such as “hypertension, diabetes, depression, and obesity” to name but a few.

But the CDC’s survey data on sleep doesn’t include crosstabs — we can only say, for example, whether men sleep more than women and whether Californians sleep more than Texans, but we can’t say whether a man from California sleeps more than a woman from Texas.

The CDC didn’t ask about the exact number of hours slept, and it only surveyed 12 states. So I can’t fully answer the question posed by Emilio Peterson (@r4lph0). But the data still provides interesting indirect answers. In 2009, 74,571 adult respondents across those 12 states were asked: “On average, how many hours of sleep do you get in a 24-hour period? <7 hours or ≥7 hours?” That framing was based on the National Sleep Foundation’s suggestion that adults need seven to nine hours of sleep per night. As for irregular breathing during sleep, the researchers got straight to the point, asking, “Do you snore?”

This is what they found: 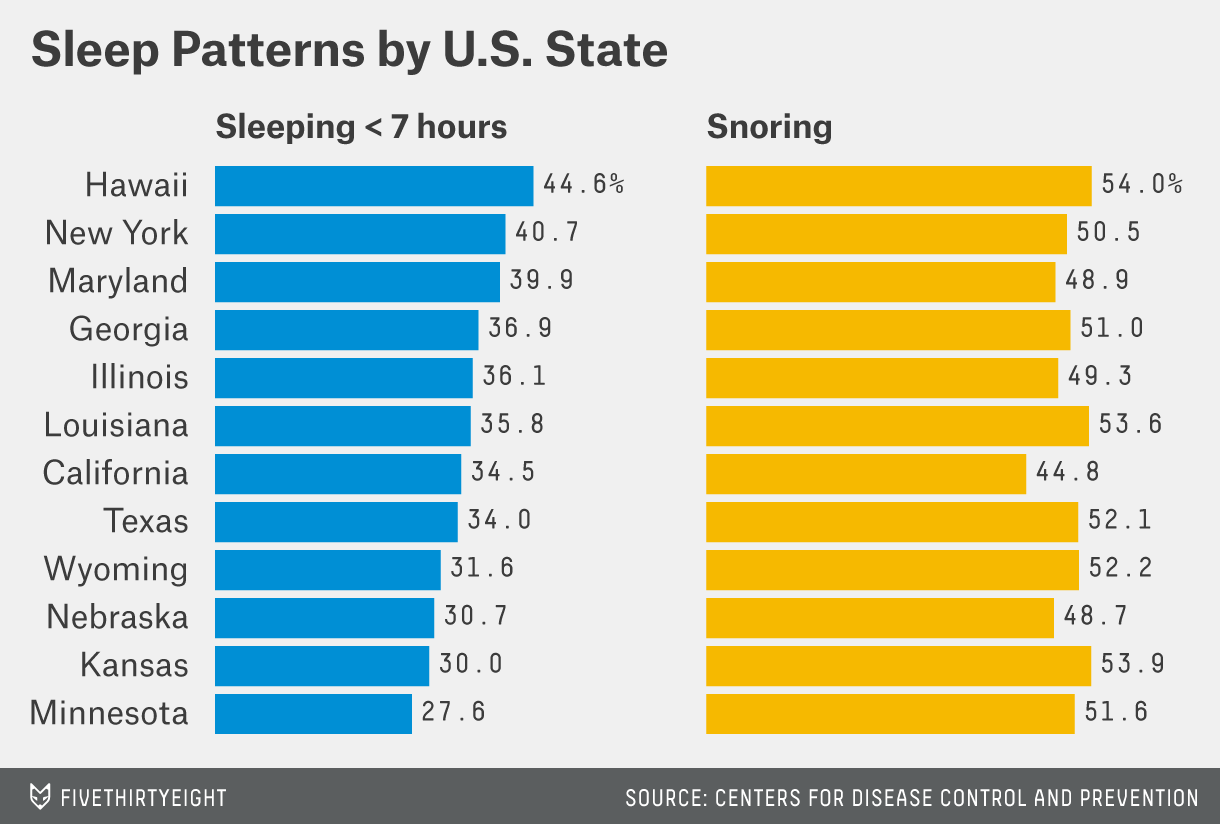 Alas, there’s no chance here of finding out whether Americans really are sleepless in Seattle. But there seems to be less snoring in California than in the other states surveyed. And Minnesotans apparently value their zzz’s.

The CDC also found that a greater share of people in relationships get a solid seven hours (despite the fact that they’re a little more likely to snore):

There is a 15.3 percentage-point gap between black and Hispanic Americans getting seven hours’ worth of sleep.

That’s the largest difference in any of the breakdowns we looked at here, with the exception of employment status:

Retirement appears to bring with it more sleep, but that highlights the problem of data broken down this way. Ideally, we would want to control for age to find out whether retirement changes sleep patterns.

But that seven-hour dividing line is frustrating. Like Peterson, we still wanted to look at data on the average number of hours Americans sleep. The American Time Use Survey, last updated in 2012, has some answers:

It’s not a complete picture, but the data shows that Americans tend to sleep less when they’re single or unable to work.