To start us off, here’s a timely question my friends and I fought over in October at The College Delly in Williamsburg, Virginia:

Who had the worst career after their involvement in the original “Star Wars” trilogy, and how can we prove it?

Few films have inspired as many arguments between nerdy types as “Star Wars.” People fight about who was the best character and why it was Boba Fett. They bicker over the ethics of a group of religious extremists attacking a second Death Star that was full of contractors and laborers. They hash out the inherent failure of probability that is Stormtrooper aim.

On the heels of the release of a teaser trailer for the seventh film — which includes several members of the original cast — now’s as good a time as any to look at the careers “Star Wars” launched. Clearly a couple of people came out OK leaving the original trilogy. Harrison Ford has had a decent run — as long as we ignore everything since the end of the George W. Bush administration. Mark Hamill managed to put together a remarkable voice acting career. And George Lucas went on to inspire millions with 1986’s “Howard the Duck.”

But let’s get more exact. We need a single number that summarizes a career in moviemaking. The easiest number to count up is the sum of box-office receipts for each actor’s subsequent films. This doesn’t catch everything — we miss all those Batman shows and malt liquor commercials, and it doesn’t differentiate between a leading role and a bit part — but it’s the most basic metric to ascertain the activity and longevity of a career.

I did count films that came out between an actor’s first “Star Wars” film and their second or third. So, for example, even though it came out before “Return of the Jedi,” Fisher got credit for “The Blues Brothers” because it was released after “A New Hope.”

Here, we’ve got actors; how many non-trilogy films they appeared in since their first “Star Wars” movie, according to OpusData, the database behind The-Numbers.com; the total box-office gross of these films; and the total box office of those films when we adjust for inflation to 2013 dollars. (Shaded actors appeared in a subsequent “Star Wars” feature film, in one of the prequel trilogy films or the “Clone Wars” IMAX feature.) 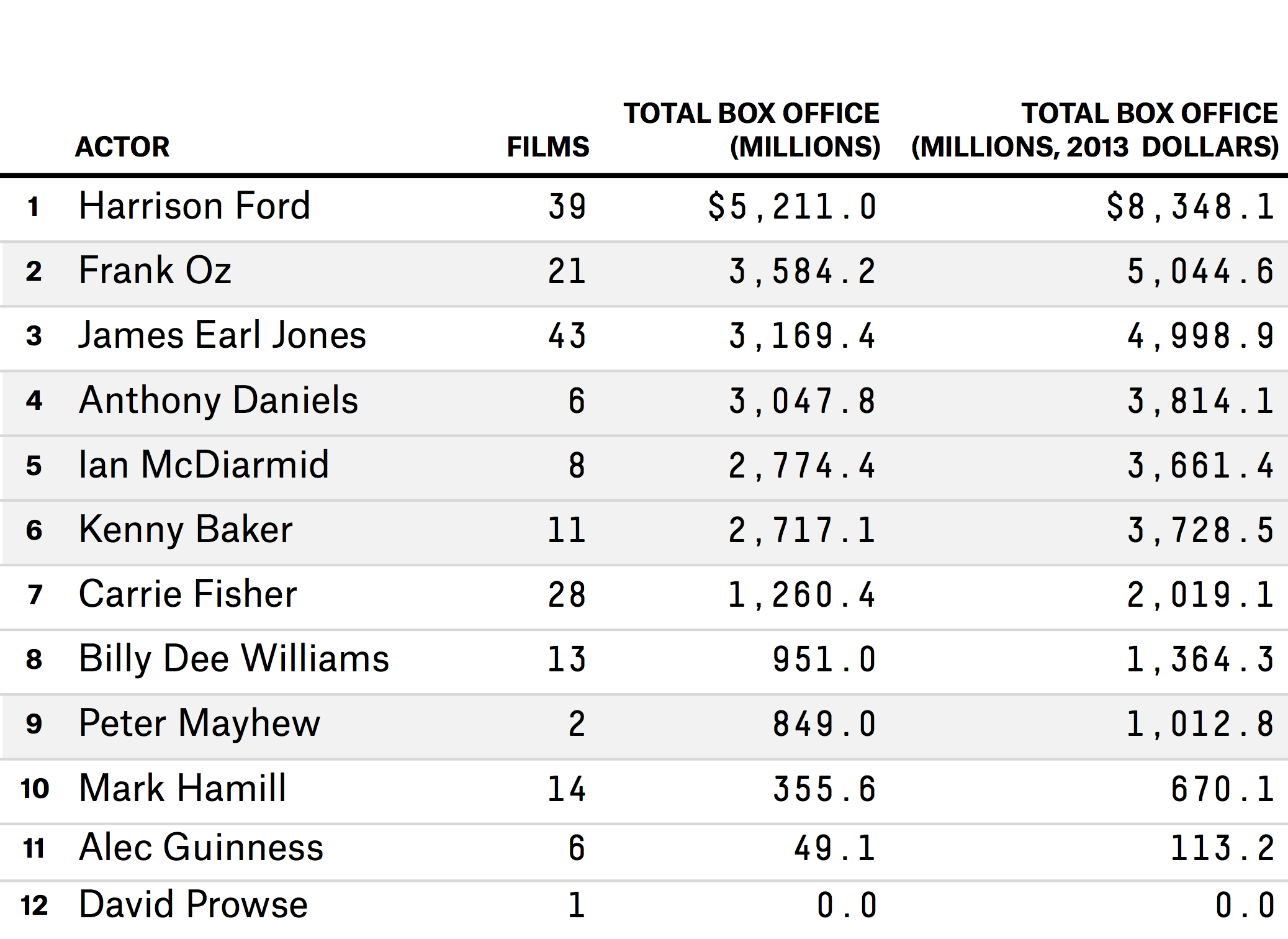 In last place: David Prowse, the performer who acted out Darth Vader and who never had a spoken line in the original trilogy. His only other film credit, according to OpusData, was in the 2011 documentary “The People vs. George Lucas.” The voice of Vader, on the other hand, has been one of the most prolific members of the original “Star Wars” cast: James Earl Jones has been in 43 feature films since his stint in a galaxy far, far away. Jones’s highest-grossing films were “The Lion King,” followed by “Coming to America” and “The Hunt for Red October.”

Still, it doesn’t feel quite fair to harp on Prowse; he was a bodybuilder-turned-actor who operated within a very particular niche and owned it. If we zero in on speaking roles, Guinness, an accomplished screen actor with a massive body of work before “Star Wars,” draws the short straw. “A Passage to India” in 1984 was his highest-grossing subsequent feature, taking in $27.2 million. Still, his was the lowest-grossing subsequent career of a speaking actor from the original “Star Wars” films.

As we’d expect, Ford comes out on top. And even if they haven’t reprised their roles since “Jedi,” Fisher and Hamill have been busy.

Fisher appeared in “Hook,” “Charlie’s Angels: Full Throttle” and “Scream 3.” Hamill, in addition to his voluminous voice work on television, appeared in “The Little Mermaid” as “additional voices” — a prestigious role if there ever were one.

For those marveling at Williams’s surprisingly high box office haul, recall that he was in 1989’s “Batman” and had a brief cameo as Lando Calrissian in last year’s “The Lego Movie.”

So, that’s it then? Ford had the most commercially successful post-“Star Wars” career, and Prowse or Guinness had the least successful, depending on how stingy we’re feeling? Actually, no.

By the metric we’re looking at, Ford doesn’t come close to having the top aggregate box office of the original series “Star Wars” alumni. However, we only looked at the main cast. If you include everyone, the honor goes to an Ewok.

An 11-year-old Warwick Davis played Wicket, and if you have no idea who that character is, you probably know him better as “the main Ewok” in “Return of the Jedi.” Since his stint on the Forrest Moon of Endor, Davis has appeared in “The Hitchhiker’s Guide to the Galaxy,” “Jack the Giant Slayer,” “The Chronicles of Narnia: Prince Caspian,” the first “Star Wars” prequel and, most substantially, the entire Harry Potter series, playing Professor Flitwick and the goblin Griphook. Davis also anchored the critically acclaimed “Life’s Too Short” television series.

Indiana Jones may have had a solid run, but he’s nowhere near the $7.7 billion haul the eight Potter films brought in. 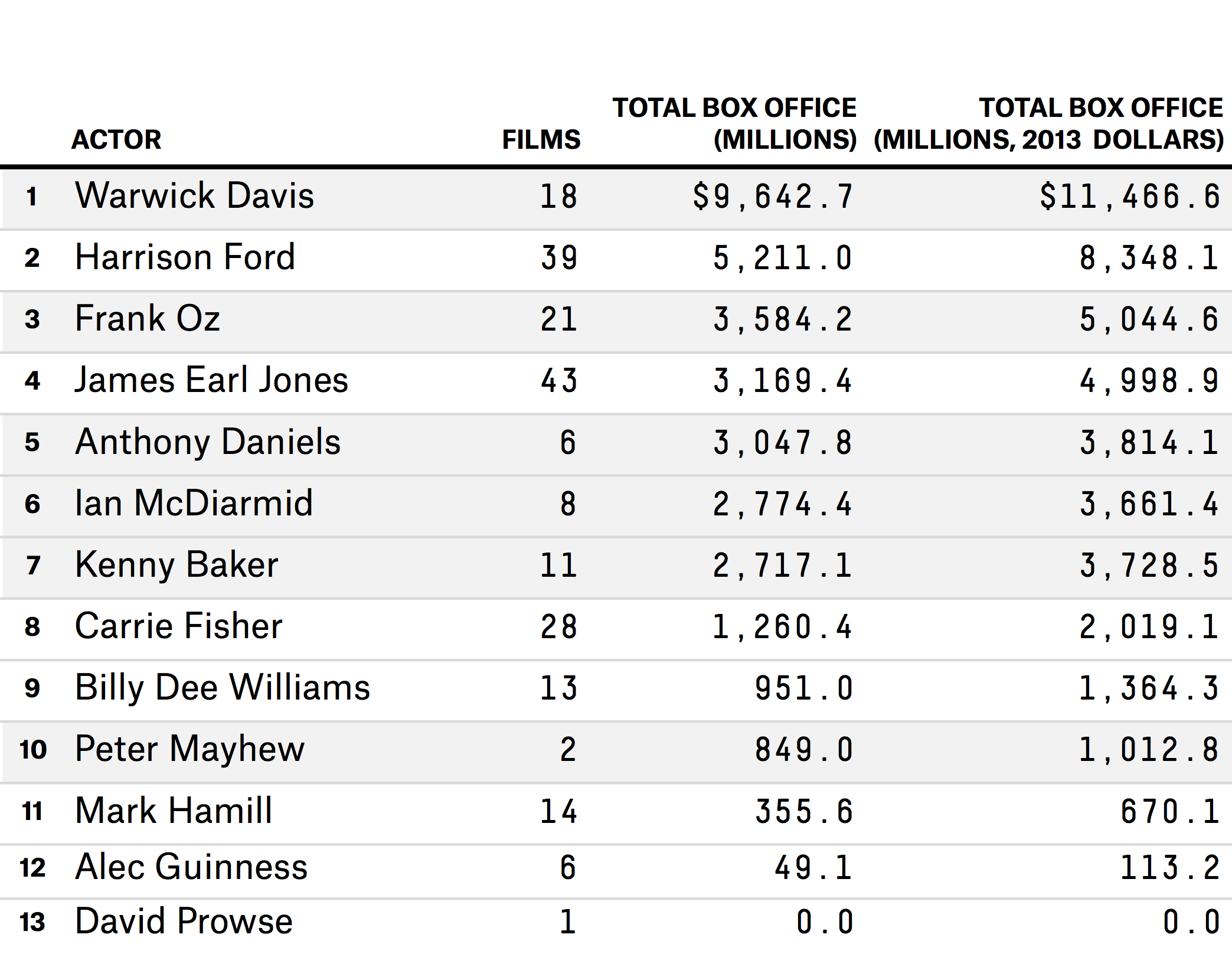 In celebration of his achievement, here’s the Ewok victory song.