I’m not going to speculate on what decision Mike Huckabee will make when he provides “clarity” tonight on his Fox News program about whether or not he will run for president.

But we can do some educated guessing about which other Republican candidates will spend the most time sweating the decision. Mr. Huckabee is the first choice of quite a few Republicans — usually somewhere between 15 and 20 percent when he’s polled — so his choice will have quite a bit of impact upon the field.

Here’s how this is going to work. I’m going to list six characteristics of Mike Huckabee, each one of which has some salience as to the sorts of voters that he’s liable to appeal to. We’ll then see which of the other Republican contenders share this characteristic in common with him. The more like Mr. Huckabee the other candidates are, the more they’ll benefit if he chooses not to run — and the more they’ll be harmed if he does.

1. Mike Huckabee is a social conservative. Although Mr. Huckabee does not always wear his social conservatism on his sleeve, his credentials are not really in question. How many other Republican candidates does this describe? I don’t think I’d get any debate on Rick Santorum, Michele Bachmann, Sarah Palin, or Herman Cain. Tim Pawlenty gets a point in this category — he’s more socially conservative than people realize. Newt Gingrich may be considered hypocritical because of his multiple marriages — but his positions are down-the-line social conservative, so he gets a point. Mitch Daniels, like Mr. Pawlenty, is more conservative on social issues that he’s usually given credit for — but he’s also called for a “truce” on them; we’ll give Mr. Daniels half a point. The other major candidates are either explicitly moderate on some key social issues or, like Mitt Romney and Donald Trump, have held inconsistent positions throughout their careers.

2. Mike Huckabee is an evangelical Protestant. It’s important to distinguish this characteristic from the previous one. Rick Santorum may be extremely socially conservative — but he’s Roman Catholic, and not an evangelical Protestant — and to some religious voters, that makes a difference. The candidates who, as best as I can tell, would consider themselves to be evangelical Protestants are as follows: Michele Bachmann, Herman Cain, Mitch Daniels, Sarah Palin, Ron Paul and Tim Pawlenty. They score a point in this category.

3. Mike Huckabee is a Southerner. This is true of surprisingly few other candidates, given the dominant role the South often plays in shaping the G.O.P.’s electoral coalition. The exceptions are Mr. Cain, Mr. Gingrich, and Mr. Paul.

4. Mike Huckabee is an outsider. This characteristic may be a little harder to define than the others — but that doesn’t make it any less important. In a primary field, candidates often work to differentiate themselves as much by whether they operate from inside or outside the party establishment as by their policy positions. To score this category, we’ll give half a point to every candidate who is not a member of what I call the “Fairfax Five”, which are the candidates who are most lauded by Republican elites in and around Washington, D.C. We’ll also give half a point to each candidate that I classified as an “outsider” when I sorted the candidates by this criterion in February. (On that list, I classified Mr. Pawlenty, Mr. Daniels and Mr. Santorum rate as being somewhere between insiders and outsiders, so we’ll give them a quarter-point for this.)

5. Mike Huckabee runs strongly in Iowa. He won the caucuses in 2008 and leads in almost all polls of it now. If Mr. Huckabee does not run, the candidate who runs a clear second place in the Iowa polls — Mr. Romney — would benefit, possibly opening up the door for him to sweep both Iowa and New Hampshire. Mr. Romney scores a full point. After that, the field in Iowa looks pretty muddy. But I think we can give half a point to the three Midwesterners in the race, who are Ms. Bachmann, Mr. Pawlenty, and Mr. Daniels, who might have some regional advantage in the state. And we can give another half-point to those candidates who have spent the most time in Iowa so far, who are Mr. Cain, Mr. Pawlenty, Ms. Bachmann, Mr. Gingrich and Mr. Santorum.

6. Mike Huckabee is a paid contributor to Fox News. You’ll sometimes hear pundits talk about the “Fox News Primary”, which is the idea that the network, because of its strongly Republican-leaning viewership, has a lot of influence over who the party’s nominee will be. But we can take this one step further — four Republican candidates have been on the network’s payroll at some point or another during this campaign cycle, and may be especially familiar to those viewers. In addition to Mr. Huckabee, they are Ms. Palin, Mr. Santorum, and Mr. Gingrich, the latter two of whom no longer appear as Fox News contributors now that their intentions to run for president have become clear.

If we add up the points across all six categories, the clubhouse leader, with 4.5 points, is Herman Cain of Georgia, the radio talk show host and entrepreneur who is beginning to get more attention lately. He’s the most Huckabee-like of the other Republican candidates. Closely behind him, with 4 points each, are Sarah Palin, Newt Gingrich, and Michele Bachmann. Mr. Pawlenty, Mr. Santorum and (somewhat to my surprise) Mr. Paul also score reasonably well. 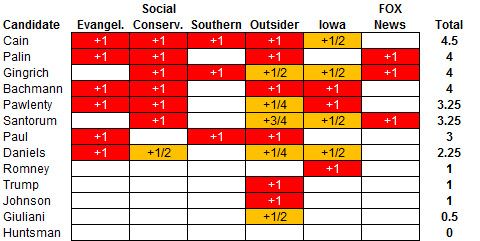 That isn’t to say that a candidate like Mr. Huntsman would prefer that Mr. Huckabee enter the race. Unless one of your opponents splits the vote in an extremely fortuitous way with his rivals, you’d almost always rather that he stay on the sidelines.

But common sense and our little exercise here would dictate that Ms. Palin, Mr. Cain, Mr. Gingrich and Ms. Bachmann would be in the strongest position to fill the hole created by Mr. Huckabee’s exit from the race, while Mr. Pawlenty and Mr. Santorum would also have some opportunities to exploit.