As Greg Maddux, Tom Glavine and Frank Thomas celebrated their inductions in Cooperstown this weekend, the Baseball Hall of Fame announced a change that will make it harder for others to join them. Instead of having 15 years of eligibility for consideration by the Baseball Writers’ Association of America (BBWAA), players will now be limited to 10.1

One theory is that the change is designed to exclude players like Barry Bonds and Roger Clemens, who are known or suspected to have used performance-enhancing drugs.2 But an attempt to target Bonds and Clemens could produce collateral damage. Players such as Curt Schilling, Edgar Martinez, Mike Mussina and Larry Walker — who are not strongly associated with PED use — could also be less likely to get in.

Take the case of Mussina, who received 20 percent of the vote on this year’s ballot, his first year of eligibility. He might seem like a hopeless case — players need 75 percent of the vote to be elected to the Hall of Fame. But players generally gain ground the longer they remain on the ballot. Sometimes they need the full 15 years to get there.

Consider other players who received somewhere between 15 and 25 percent of the vote in their first eligible season. There were 16 such players between 1966, when the Hall of Fame began holding elections every year instead of every other one, and 2000, the most recent class of players to have exhausted their 15-year eligibility window:

So by a quick-and-dirty rendering, Mussina’s chances of getting elected to the Hall of Fame by the BBWAA have been sliced from 5 in 16 (representing the five players who made it within 15 seasons) to 2 in 16 (only Drysdale and Williams made it within their first 10 seasons). He might also have some chances with the Veterans Committee. But the Veterans Committee has been stingy about electing players in recent years. The point is that players like Mussina need all the chances they can get.

We can formalize this analysis by running a set of logistic regressions that estimate a player’s likelihood of eventually making the Hall of Fame based on his performance in his first year on the BBWAA ballot. First, I ran a regression to consider whether players were selected by the BBWAA within 15 seasons.3 Then I ran another regression to evaluate whether players made it within their first 10 eligible seasons. (Among players who first appeared on the ballot in 1966 or later, those who were elected by the BBWAA somewhere between their 11th and 15th seasons were Snider, Sutter, Blyleven and Jim Rice.)4 Finally, I considered whether players made the Hall of Fame at all — whether through the BBWAA or the Veterans Committee.5 The results are represented in the chart below. 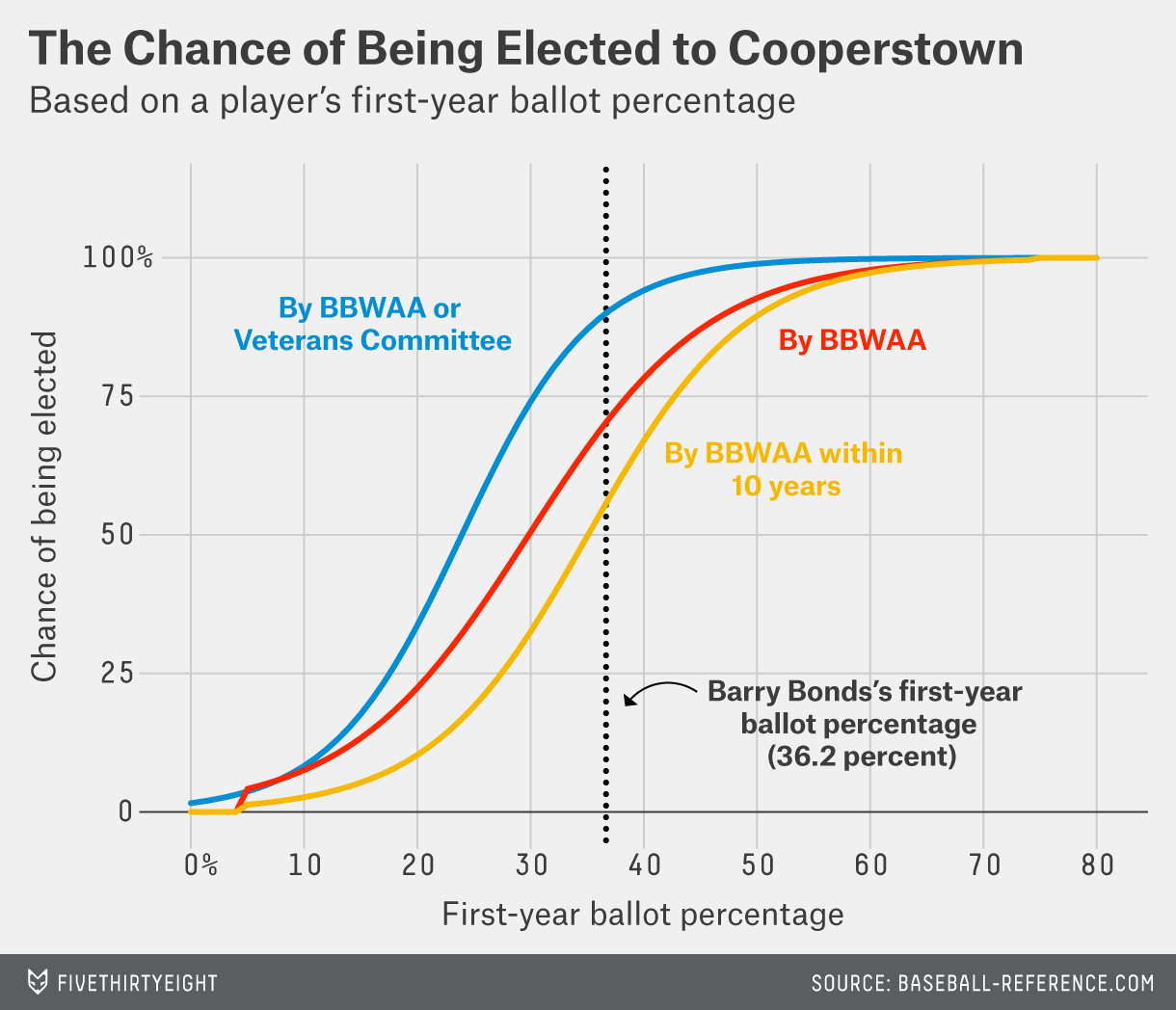 To read the chart, scan across until you find a player’s vote share in his first year of eligibility — then scan up to see where the various curves intersect it. For instance, for a player like Mussina who got 20 percent of the vote in his first year:

These answers aren’t too far from the quick-and-dirty numbers that I came up with before. They suggest that Mussina is an underdog to make the Hall of Fame — but more of an underdog now that he’ll have only 10 years of eligibility to do so.

What about a player — such as Bonds — who got 36 percent of the vote in his first season of eligibility?

So a player like this will also see his chances of being elected by the BBWAA decrease with the rule change. But he has a much better backstop: The Veterans Committee has usually elected players like this even when they were bypassed by the writers. That hasn’t been true for players like Mussina.

Of course, Bonds and Clemens are no ordinary cases — and this method may not do a very good job of describing their chances. There are a couple of other objections that we need to consider first, however.

One is that the change in rules could affect voter behavior. Players sometimes receive a boost in their vote share in their 15th and final year of eligibility. Now, knowing that it’s their last chance, the writers could rally around a player in his 10th year instead.

Another consideration is that rotating players off the ballot sooner could clear slots for more recently retired players. BBWAA voters are limited to naming 10 players on their ballots. A few of them might have run out of room for Mussina this year, for instance, because they were reserving space for Alan Trammell, Jack Morris, or other players between their 11th and 15th years of eligibility.

Indeed, this could be of some help to players like Mussina. But there would be a more direct means of providing relief — by liberalizing or eliminating the 10-player limit. Players from the 1980s, 1990s and 2000s are badly underrepresented in the Hall of Fame relative to players who had the good fortune to be born earlier.

The rule change, in other words, seems designed to make the Hall of Fame more exclusive, not less so. But how might it affect Bonds and Clemens in particular?

As I mentioned, they aren’t ordinary cases. For a player like Mussina, a large fraction of the BBWAA electorate might be thought of as “swing voters” — they could live with him in the Hall of Fame or without. Given how strong feelings are on the issue of performance-enhancing drugs, the choice is likely to be much more binary for Bonds and Clemens. For that reason, their vote shares might not increase as much in future seasons. (Another PED user, Mark McGwire, has been on the ballot for eight seasons and has seen his vote share decrease in almost every one.) Personally, I’d wager a fair amount of money against Bonds or Clemens ever being elected to the Hall of Fame by the writers, whether in 10 years or 15.

Nevertheless, baseball’s hive mind could change its stance on PED use with the benefit of hindsight. It’s not that hard to conceive of alternate realities. NFL players who were suspended for PED use, like the former San Diego Chargers linebacker Shawne Merriman, barely seem to suffer any lasting damage to their reputations. (Merriman made the Pro Bowl in 2006, the same year he was suspended for four games.)

One scenario could involve a known PED user who is otherwise a more sympathetic case than Bonds or Clemens making the Hall of Fame.6 For instance, Andy Pettitte, who admitted to using human growth hormone, is due to become eligible for the Hall of Fame in 2019. Pettitte’s case is not clear-cut on the statistical merits, but suppose he made it in 2023, his fifth year on the ballot. Under the old rules, Bonds and Clemens would have had a few years left on the ballot with that precedent in place. Now, they’ll already have exhausted their eligibility.

Bonds and Clemens would still be eligible for consideration by the Veterans Committee. But whatever misgivings you might have about the BBWAA, the Veterans Committee has been far more problematic. Its rules are constantly changing, its process is not very transparent, and it has oscillated from being far too liberal to being very stingy about letting in players. Depending on the rules it drew up, the Hall of Fame could design a Veterans Committee that was relatively sympathetic to Bonds or Clemens — or firmly opposed to their election.

Another theory is that the Hall of Fame doesn’t have strong feelings about Bonds and Clemens per se, but implemented the rule change in the hopes of putting the PED issue behind it sooner. It’s certainly not good advertising for Cooperstown when discussions are dominated every year by arguments over steroids.

But these cases won’t go away anytime soon. Pettitte will become eligible in a few years — and a few years after him, Alex Rodriguez. Ryan Braun, another known PED user who could eventually build Hall of Fame statistics, is many years from retirement. In the meantime, players like Mussina could be caught in the crossfire.