The NFL released its 2014 schedule Wednesday night, confirming the dates and locations of all 256 matchups (and ending your chance to enter the St. Louis Rams’ schedule-guessing contest, even though you had no chance of winning). With the slate solidified, you can probably expect to see more of the standard strength-of-schedule analysis that averages the 2013 winning percentages of a team’s opponents. Unfortunately, those numbers aren’t especially useful, because they assume each team will be exactly as good in 2014 as it was in 2013; in reality, NFL teams vary quite a bit from season to season, and our ability to predict which ones will and won’t be good in a given year is extremely limited.

For example, going into the 2013 season, the Detroit Lions were expected to have the league’s second-hardest schedule based on the 2012 records of their opponents. So, what ended up happening? According to the strength-of-schedule component of Pro-Football-Reference’s Simple Rating System, Detroit actually had the league’s easiest slate of opponents last season.

In cases like this, a better tactic is to make regressive predictions. We can use a regression formula to predict each team’s 2014 Simple Rating from its ratings over the previous two seasons, while building in plenty of regression to the mean to reflect our limited knowledge. If we base each team’s projected 2014 strength of schedule on these regressive predictions (while also taking into account a 2.5-point home-field advantage depending on where the game is being played), we arrive at the following projected schedule strengths for 2014: 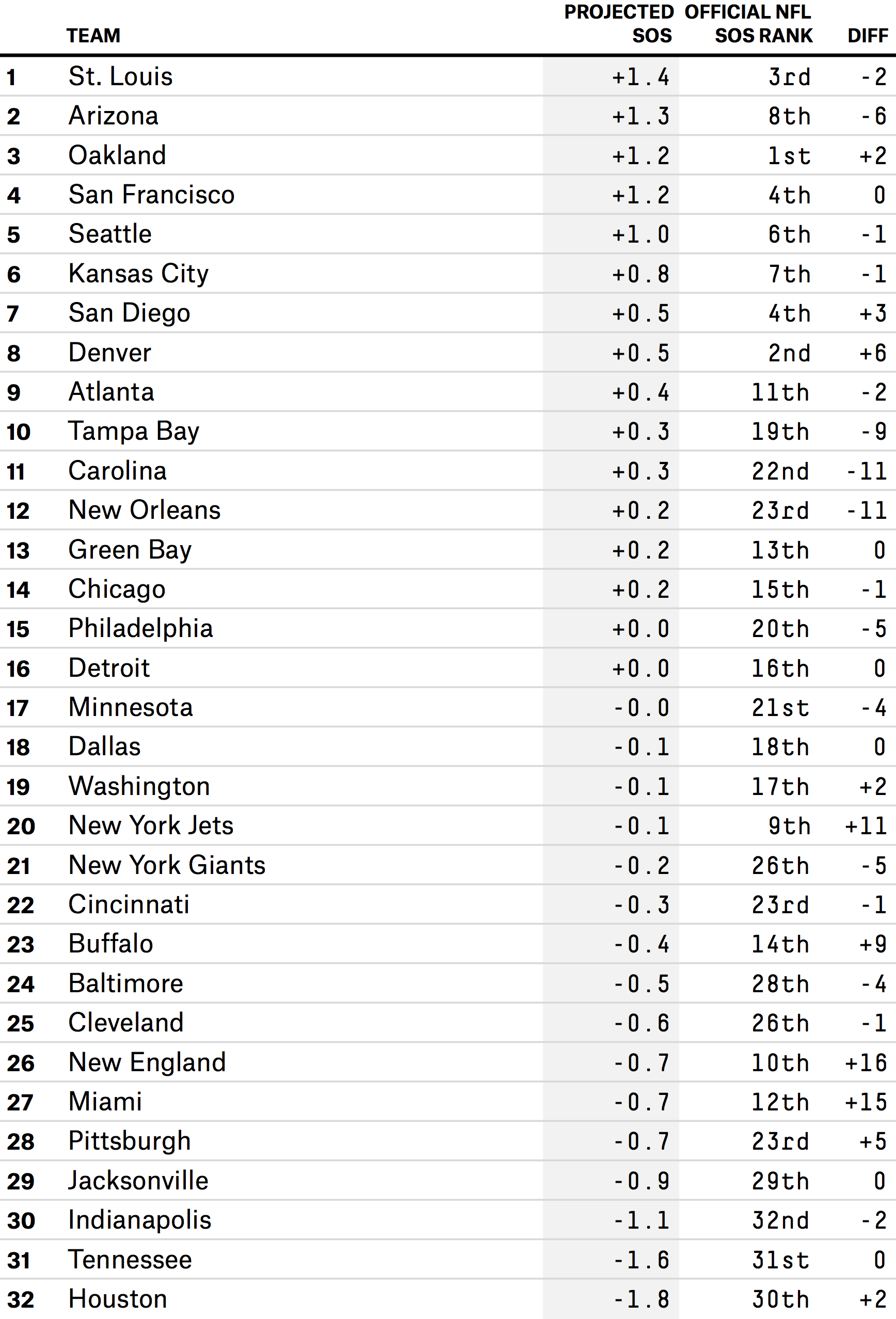 The biggest differences between our projected SOS numbers and the NFL’s official rankings center around a handful of teams in the AFC East and NFC South. The AFC East’s record was better in 2013 than it had been in 2012 — despite posting a poorer point differential — while the NFC South had a better record in 2012 than in 2013 (mainly because the Atlanta Falcons’ record declined so much in 2013).

Because the regression is looking at two years’ worth of data (albeit weighing results from 2013 about 2½ times as strongly as those from 2012), it expects Atlanta to be roughly an average team in 2014 — not the 4-12 team it’s perceived to be by the NFL’s official SOS metric — which feeds most heavily into the SOS ratings of Atlanta’s divisional foes in Carolina, Tampa Bay and New Orleans.

Meanwhile, the two-year regression is skeptical about the AFC East having as good a record in 2014 as it did in 2013. It’s not so much about the AFC East’s improved out-of-division win-loss record in 2013 (it was 22-18 outside the division in 2013, only a modest improvement over its 19-21 record in 2012), but more about the way the division’s records didn’t match up with its teams’ point differentials. According to Football Outsiders, AFC East teams’ actual wins exceeded their pythagorean wins by 3.9 victories in 2013, including 2.6 for the New York Jets alone. Research has shown that such overachievement is rarely sustainable, so our regression method would be expecting a decline for the Jets (and the division as a whole) in 2014.

Such a regression-based system is far from perfect; for example, it doesn’t even know about which players changed teams in the offseason between 2013 and 2014. (But even methods that try to account for such wrinkles do a relatively poor job of prediction compared with simple metrics like our regression.) In other words, the above SOS rankings are going to be wrong — but they’re almost certain to be a more accurate gauge of each team’s schedule difficulty in 2014 than the official rankings that only tap into last year’s records.