On Thursday, I highlighted Nolan Arenado’s 27-game hitting streak (it ended Friday at 28 games), comparing his overall offensive statistics during the streak to those of streaks from the past. But a few readers smartly pointed out that I was only comparing Arenado’s streak to those that stopped at 27, rather than looking at the stats of streaks that passed that number.

Unfortunately, there’s no easy way to pull data on the first 27 games of, say, a 30-game hitting streak at sites such as Baseball-Reference.com. But one way we can set longer streaks on the same playing field (so to speak) as shorter ones is to add a regression to the mean component to the analysis. That will allow us to compare rate statistics like weighted runs created plus (wRC+), a per-plate appearance measure of batting productivity, despite wRC+ being more prone to random variance in the smaller samples of shorter streaks.

“The Book,” a guide to sabermetrics by three well-respected baseball statisticians, suggests regressing a player’s weighted on-base average (the building block underlying wRC+) by adding 220 plate appearances of league-average performance to his numbers. The average wRC+ is always 100, so for the players on our list, we can compute a regressed version of wRC+ by doing the following:

With that, here are the most productive hitting streaks of 27 or more games (updating Arenado’s run to include Friday night’s results), ordered by the regressed wRC+ during the streak: 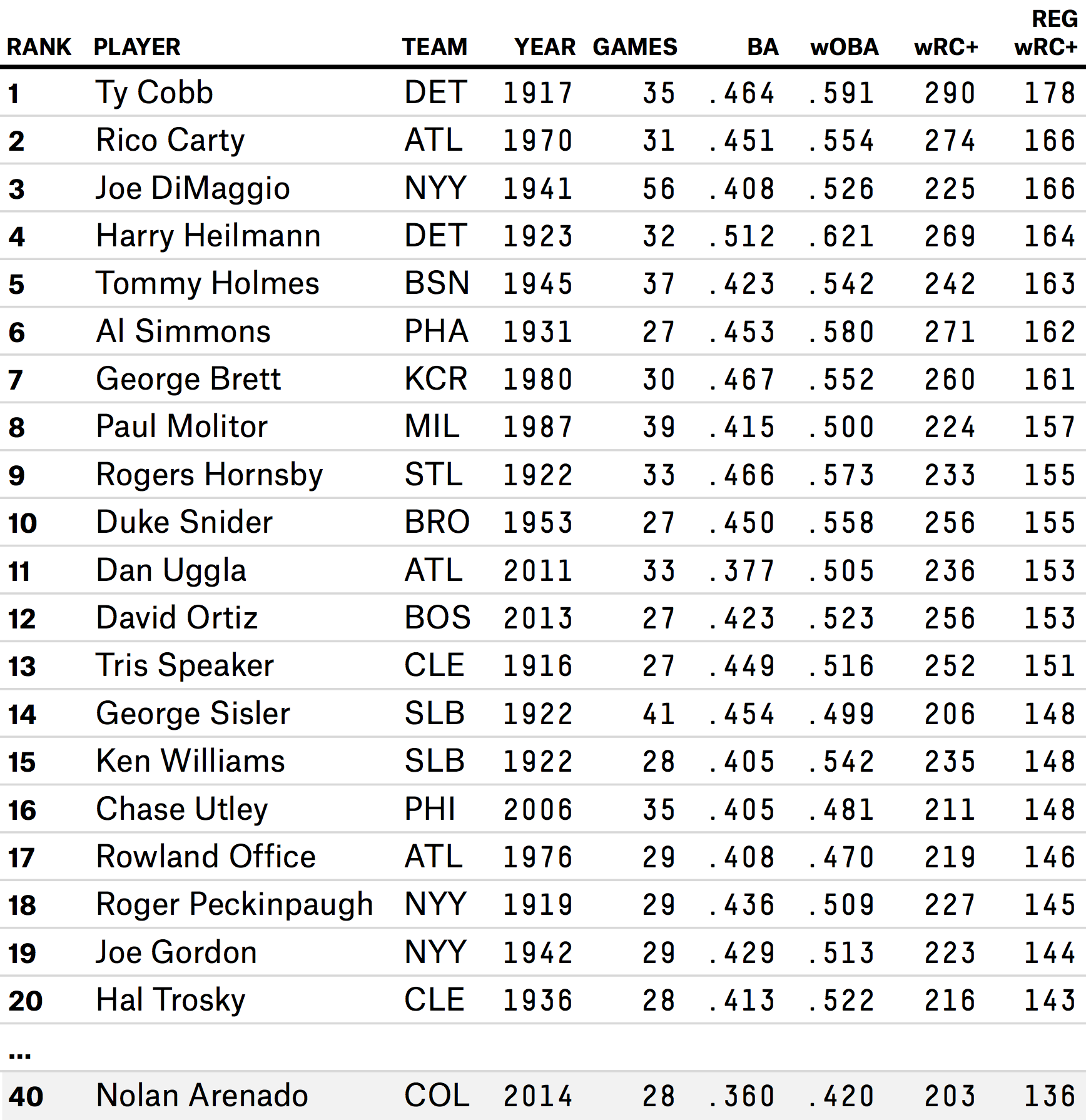 FiveThirtyEight reader Anthony Randazzo also raised the great point that hitting streaks shouldn’t necessarily get preferential treatment over on-base streaks (in which a player can sustain a streak via a walk or being hit by a pitch, in addition to a hit).

And, coincidentally, Jose Bautista of the Toronto Blue Jays had an on-base streak of 38 games end Sunday, a run that received far less attention than Arenado’s, despite Bautista producing a regressed wRC+ of 139 during the streak (Arenado’s wRC+ was 136 during his hitting streak).

Baseball fans have always placed more value on hitting streaks than on-base streaks. Some of that is owed to the primacy of batting average over on-base percentage, and some to just plain rarity. As I found during my research, there have been 94 hitting streaks of 27 or more games during the Retrosheet era (1914-present), but to get that many 27-game on-base streaks, you need only go back to the 2009 season. This makes sense, of course, because the more ways you give a player to extend a streak, the higher the odds of a long streak.

Although an on-base streak might not be more valuable in a vacuum, Bautista’s streak puts him in much better hitting company than Arenado.