A lot can change before Election Day next year, when 36 states will vote for governor. But at this early stage — when decisions on whether to run or retire are considered and made — 10 of the 32 governors who are eligible to run for re-election have net negative approval ratings in their states.

The two most unpopular governors up for re-election in 2014 are Gov. Lincoln Chafee of Rhode Island, an independent, and Gov. Pat Quinn of Illinois, a Democrat. But the remaining eight governors with net negative job approval ratings are Republicans, including four who rode the Tea Party wave to power in blue and purple states in 2010 and now appear to be in some danger: Gov. Rick Scott of Florida, Gov. Tom Corbett of Pennsylvania, Gov. Paul LePage of Maine and Gov. Rick Snyder of Michigan.

The chart below includes the three most recent job approval polls for each incumbent eligible for re-election in 2014. (The four states where term limits prevent the governor from running again — Arizona, Maryland, Nebraska and Arkansas — and Massachusetts, where Gov. Deval Patrick has announced he will not seek another term, are not included.) Surveys conducted before 2012 are not figured into the averages. 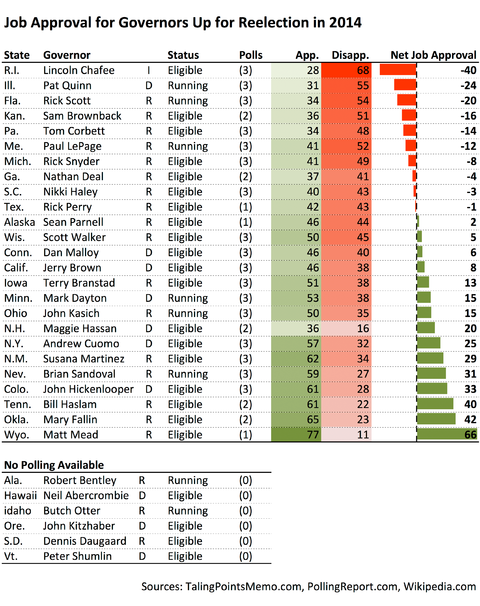 In Rhode Island, just 28 percent of residents approve of the job performance of Mr. Chafee, their Republican-turned-independent governor. The chief reason for Mr. Chafee’s troubles appears to be Rhode Island’s dismal economy. The state is tied with California for the highest unemployment rate in the nation, at 9.8 percent.

According to reports, Mr. Chafee is considering becoming a Democrat. That might not help him much. Roughly half of Rhode Island voters are unaffiliated with either major party, and their political allegiances are often fickle. If the economy remains bad, Mr. Chafee will have difficulty winning their votes again.

In other words, being unpopular does not necessarily make an incumbent vulnerable to defeat. The eight other governors up for re-election in 2014 who are under water in their job approval ratings are Republicans, but four of those Republicans — Gov. Sam Brownback of Kansas, Gov. Nathan Deal of Georgia, Gov. Nikki Haley of South Carolina and Gov. Rick Perry of Texas — are in solidly Republican states and are likely to have an easier road to re-election if they run.

But the remaining four — Mr. Scott, Mr. Corbett, Mr. LePage and Mr. Snyder — lead states that were carried by President Obama in both 2008 and 2012. All were helped by favorable political winds in 2010 that no longer blow so hard.

Mr. Scott appears to be in the most trouble. A recent Quinnipiac survey showed former Gov. Charlie Crist, a Republican-turned-Democrat and a possible candidate in 2014, beating Mr. Scott, 50 percent to 34 percent.

Mr. Scott has been stocking up campaign contributions, but currently only 32 percent of voters say he deserves a second term.

Mr. Corbett is in a similar position. Sensing weakness, Pennsylvania Democrats are lining up to challenge him.

Both Pennsylvania and Florida are rated as “tossups” by the Cook, Rothenberg and Crystal Ball reports, the only states — along with Rhode Island — to be rated tossups in all three sets of ratings.

In Maine, Mr. LePage’s best chance of winning re-election may be to repeat his 2010 route to victory: winning a three-way race where the left-leaning and moderate votes are split. A recent survey by the Pan Atlantic SMS Group showed Mr. LePage leading all three-way matchups but losing by eight percentage points to an independent, Eliot Cutler, in a two-way race.

Mr. Snyder is in a slightly less precarious position in Michigan. His net job approval rating is negative, but in the single digits. The Rothenberg report rates the race as a tossup, but Michigan is rated as leaning Republican by Sabato’s Crystal Ball and as likely Republican by the Cook report. Part of the reason for Mr. Snyder’s relative strength is the lack of significant opposition. No prominent Democrat has announced an intention to run, but if one did, Mr. Snyder’s chances could certainly diminish.

Mr. Snyder, Mr. LePage, Mr. Corbett and Mr. Scott may find hope in the fortunes of another Republican governor of a swing state who was elected in 2010: Gov. John Kasich of Ohio. Mr. Kasich’s job approval rating was in the 30s in 2011. As Ohio’s economy turned around, so did Mr. Kasich’s image. The percentage of Ohio residents who approved of his job performance climbed into the 40s in 2012, and recent surveys have shown his numbers rebounding into the 50s.

Those numbers do not guarantee that Mr. Kasich will be re-elected, but he is in much better shape than his Republican colleagues. Not surprisingly, an incumbent governor’s job approval ratings have been shown to be strongly correlated with how constituents vote.