Last Monday, a bipartisan group of eight senators agreed to a set of overarching principles for immigration reform. On Tuesday, President Obama traveled to Las Vegas to outline his own proposals. Mr. Obama’s speech was followed by reports that a bipartisan group of representatives in the House were hashing out a set of measures.

Lawmakers have tried this before, of course. Efforts to overhaul the immigration system fell apart during George W. Bush’s administration and in 2010.

But prospects for the latest effort are considered improved. Mitt Romney’s dismal performance with Hispanic voters in November gave Republican legislators “a new appreciation” for change, as Senator John McCain, a Republican from Arizona who is one of the eight senators in the bipartisan group, has said.

That may be true for many politicians seeking to win national and statewide elections in places where the Hispanic share of the electorate has increased significantly. But the main hurdle is expected to be in the Republican-controlled House of Representatives, where a different set of political incentives apply.

Most Republicans in the House come not only from very conservative districts but also from overwhelmingly white districts. 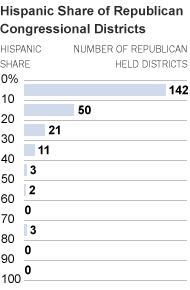 In all, 84 percent of House Republicans represent districts that are 20 percent or less Hispanic.

Of course, Republicans without a large bloc of Hispanic constituents could still back changes to immigration law, and vice versa. But if Speaker John A. Boehner abides by the Hastert rule — which says that a bill should only be brought to a vote if the majority of the majority supports it — then House legislation overhauling the nation’s immigration system will have to rely on a substantial number of Republicans who represent mostly white districts.

If any legislation cannot clear that hurdle and win a majority of the majority, its best hope may be to follow the path of the Hurricane Sandy relief bill and the vote on the deal on the so-called fiscal cliff. In both cases, Mr. Boehner allowed a vote without a majority of his caucus supporting the legislation. Both bills passed with a majority of Democratic votes and supported by a minority of Republicans.

Which Republicans might feel compelled to back an immigration overhaul? One place to look would be the Republican-held districts with the largest Hispanic communities. 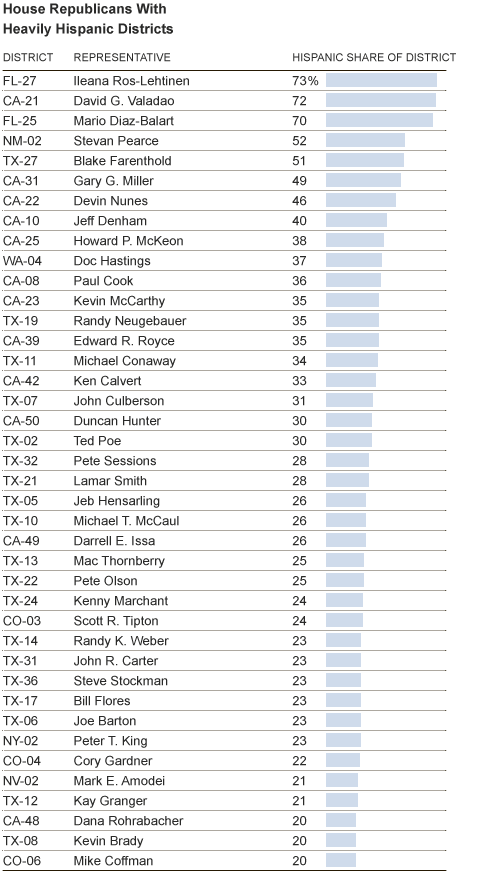 Again, there is no guarantee that Republicans with a greater share of Hispanic constituents will necessarily favor reform. But three of the four Republicans in the House already negotiating an immigration bill with Democrats — Representatives John Carter and Sam Johnson, both of Texas, and Mario Diaz-Balart, of Florida — come from districts that are more Hispanic than the average Republican-held Congressional district.