UPDATE: Tim Bishop (NY-1), who made the list below, appears to be a solid yes vote. A constituent tells me that he attended a house party on Friday in which Bishop urged the attendees to write letters in support of health care reform. Bishop also voted for the reconciliation bill in committee today and was a yes vote in November.
____

Unions, activist groups and Democratic thought leaders are all starting to urge primary challenges against Democrats who vote against the health care bill. In many cases, it’s an idle threat. Want to primary Dennis Kucinich, for instance? It’s too late: Ohio’s filing deadline passed in February.

I identified 10 Democrats, however, for whom all of the following criteria are true:

1. In a state in which the filing deadline for primary candidates is April 1st or later. I assume that at least some lead time is required to launch a primary challenge. This eliminates a number of important states, including California, Illinois, Ohio, and Pennsylvania.
2. Not yet committed yes votes on health care. According to David Dayen’s whip count.
3. In districts with a PVI of R+4 or bluer. This is a critical threshold because Nancy Pelosi could permit all non-retiring Democratic members in districts with PVI’s of R+5 or redder to vote against the bill and still have (barely) enough votes for passage. Everyone in a district of R+4 or bluer would have to vote for the bill, however.
4. Been in office for less than 10 years. It’s very hard to primary incumbents who have a decade or more of service time in their districts, except in the case of gross misconduct, etc.
5. Are not retiring. 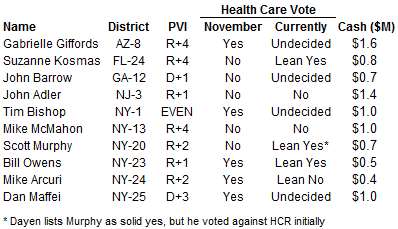 Six of the ten vulnerable Democrats are in New York State, which offers a number of advantages to primary challengers: it has a very late filing deadline, and it has a lot of mobilizing infrastructure between strong unionization, the presence of the Working Families Party, and the number of activist groups working in and around New York City. It’s hard to imagine that the threat of a primary challenge wouldn’t be at least a little bit persuasive to NY-24’s Mike Arcuri, for instance, who has just $400,000 in cash on hand and voted for the health care bill originally. The unions have also explicitly threatened a primary challenge against NY-13’s Mike McMahon, although he hasn’t moved off his no vote so far.

I don’t have much doubt that, if Nancy Pelosi scheduled a floor vote on health care and it failed, Democrats would be out for blood. The influence of the kill-the-bill crowd (perhaps always overstated) seems to have eroded further in recent weeks, with some 83 percent of MoveOn.org members now wanting the health care bill to pass. These people aren’t just going to sit on their hands if health care fails. I got in a couple of friendly debates with some folks after my mildly skeptical post about the primary challenge to Blanche Lincoln in Arkansas; what they emphasized to me is that, whatever abstract questions there might be about the wisdom of particular primary challenges, they tend to go out the window when people are angry enough.

But it’s hard to identify good primary challengers, especially on short notice, and so there’s more than a small element of bluffing here. Still, most of these Democrats have fewer excuses than others in their party to oppose the bill, and even modest pressure could move one or two of their votes — which might make the difference between its passage and failure.