Earlier this month, I looked at holiday music on the radio, and in particular, which songs get played most and when stations switch from drum solos to jingle bells. Intense planning determines when your local soft rock or variety station jumps over to the all-holiday format, and what it plays is the result of several sleighs worth of market research.

We’re less than 24 hours out from the big day, and holiday tunes are in full swing. Your particular Yuletide soundtrack partly depends on where you live.

The top 10 holiday tunes played on terrestrial radio account for a whopping 38 percent of all holiday tracks played during the period I pulled data for. We have different amounts of data from different stations because some flipped the switch to the holiday format before others. But when we divide the stations into their constituent Census regions, there’s some variety in how often the top 10 get played. 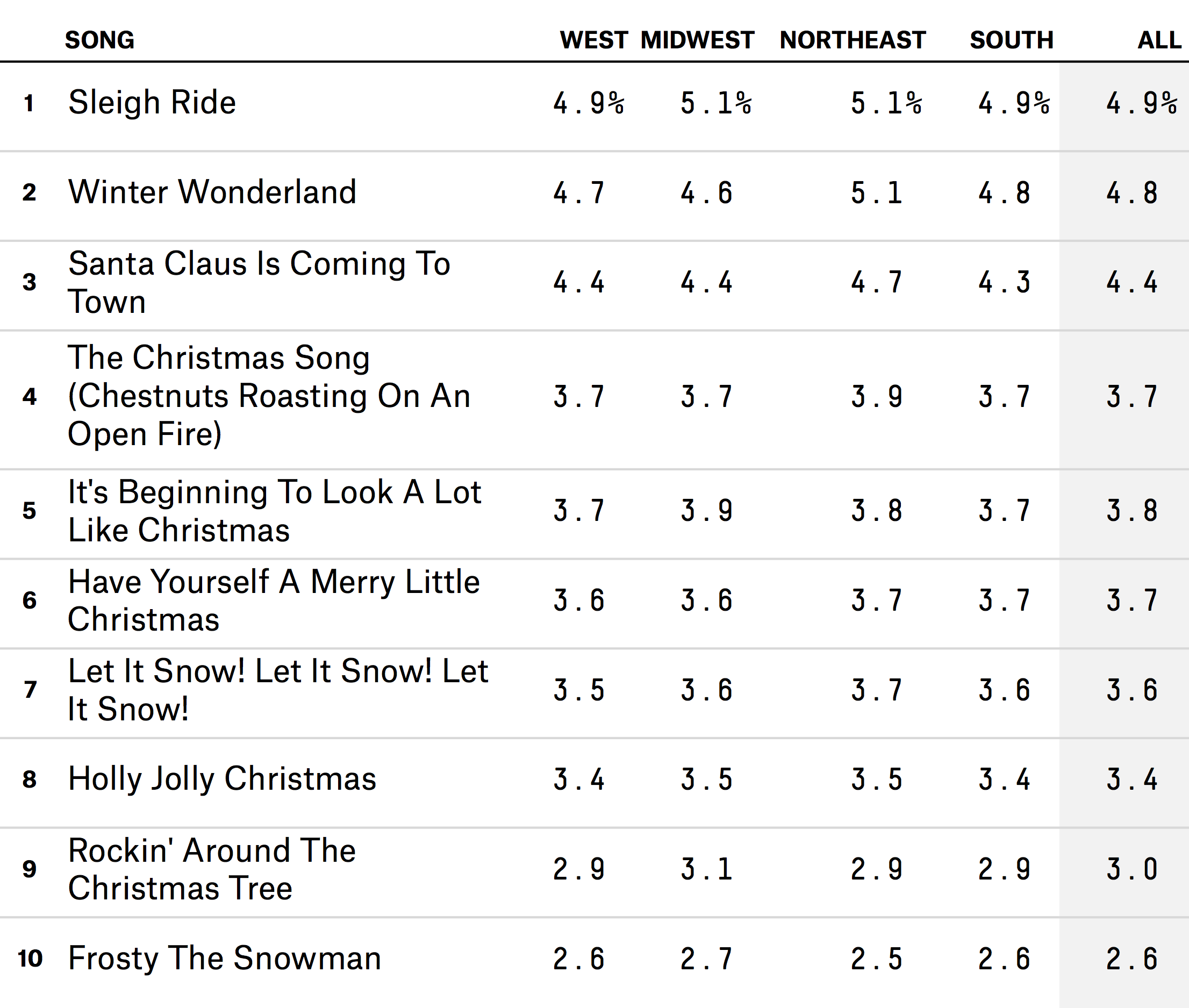 The song with the biggest difference from region to region: “Winter Wonderland.” Folks in the Northeast apparently enjoy the winter a bit more than those in the Midwest.

But the very popular songs aren’t really where we see the biggest regional differences. Some holiday tunes occupy a particularly cozy niche. For instance, “Soldier’s Silent Night” is the most disproportionately played song in Biloxi, Mississippi; Anchorage, Alaska; and Charleston, South Carolina — all of which have large military bases nearby.

“There’s No Place Like Home” by Glen Campbell appears highly regional, seeing airtime only in Toledo, Ohio, and Chicago. “Christmas In Dixie” by Alabama gets played more often in Jackson, Mississippi, than anywhere else.

I’ll let you guess the only city that plays “A New York Christmas” by Rob Thomas.

The song “Dominick the Donkey” by Lou Monte is said to be popular in Italian-American households, so it’s not shocking that it’s the most disproportionately played tune in Worcester, Massachusetts, and Poughkeepsie, New York — suburban cities in states where more than 10 percent of residents have Italian ancestry.

The hotspots of some niche songs seemed random. “Faeries” by Mannheim Steamroller is 10 times as popular in Mobile, Alabama, as the rest of the country. “Santa’s Beard” by The Beach Boys really got play only in Minneapolis. “The Man With All The Toys,” also by The Beach Boys, saw most of its play in Greensboro, North Carolina.

And then there was “Shake Up Christmas” by Train, which was played 18 times in Baton Rouge — and that’s it. The song sounded vaguely familiar. And after a little research, I figured out that it comes from a 2010 Coca-Cola advertisement that appears to have picked up traction in Louisiana. Indeed, if you listen to the backtrack, you can hear the unmistakable Coca-Cola jingle.

Is there a holiday song that gets played in your area that you think is unique? Leave it in the comments or hit me up on Twitter, and I’ll see what the data says.