That title is not meant to be read rhetorically or sarcastically. But the correct answer is “both of them”. The thing, however, is that they are somewhat opposite problems.

The below is data compiled from Rasmussen Reports, consisting of over 7,000 likely voter interviews conducted within the past week. What I’m looking at is solely perceptions of the candidate among voters within his own party. 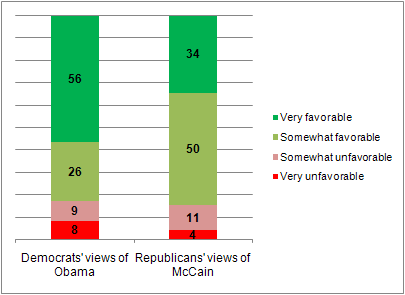 The topline numbers are not very different from one another. Obama’s favorables among Democrats are 82:17, and McCain’s among Republicans are 84:15. However, that conceals a lot of information about the strength of those perceptions.

A greater number of Democrats’ — about 8 percent — have a very unfavorable view of Obama. These 8 percent are your PUMAs — people that will probably not vote for Obama under any circumstances. Only 4 percent of Republicans feel that way about John McCain.

Obama would be thrilled, of course, if he could actually get his defection rate down to 8 percent: John Kerry lost 11 percent of Democrats to George W. Bush; Al Gore lost 11 percent to Bush and 2 to Nader; Bill Clinton lost 10 percent to Bob Dole and 5 percent to Ross Perot. In reality, Obama will probably lose almost all of the “very unfavorables” and perhaps half of the “somewhat unfavorables”, which would produce a defection rate of 12-13 percent (not all of those necessarily to McCain). McCain’s defection rate, by that calculus, would be 9-10 percent (not all of those necessarily to Obama).

But look, by contrast, at the enthusiasm gap between the two candidates. 56 percent of Democrats have a very favorable view of Barack Obama, while just 34 percent of Republicans have a very favorable view of John McCain. The thing that’s a little bit scary for McCain is that this is after a likely voter screen has been applied, and so even after you get done filtering out those Republicans around the margins who weren’t planning to vote in the first place, many of the remaining ones are still doing so for McCain somewhat grudgingly.

The good news for McCain is that if the election is close, the vast majority of these people should still wind up voting for him. That’s what turnout operations are all about, and the GOP generally runs a pretty good one. Besides, 52 percent of Republicans have a very unfavorable view of Obama, as compared to 33 percent of Democrats who feel that way about McCain.

But if the election doesn’t look like it’s going to be close, there could be a snowball effect in which Republican turnout is quite low. If that is the case, the map could turn out to be very, very blue, and Republicans might lose a couple more Senate seats than are generally thought to be in play — somewhere like Idaho, for instance, could be interesting — and perhaps an extra dozen or half-dozen House seats on top of that.