Vermont and New Hampshire are similar in a lot of ways — they’re both small, heavily rural New England states that root for the Red Sox. But when it comes to taxes, they could hardly be more different. Vermont is one of the nation’s highest-tax states on a per capita basis; New Hampshire is the lowest. Where they get that tax revenue is different, too: Vermont relies heavily on broad-based income and property taxes. New Hampshire gets much of its revenue from targeted taxes on cigarettes, gasoline and other items, as well as taxes on businesses.

Across the country, states vary widely in both the amount and the source of their tax revenue, as new data from the Census Bureau makes clear. States collected an average of about $2,700 per person in tax revenue in 2014. (That’s all taxes — regardless of who paid them — divided by total population, including children.) But there was a huge range, from $1,700 per person in New Hampshire to more than $8,000 per person in North Dakota.1 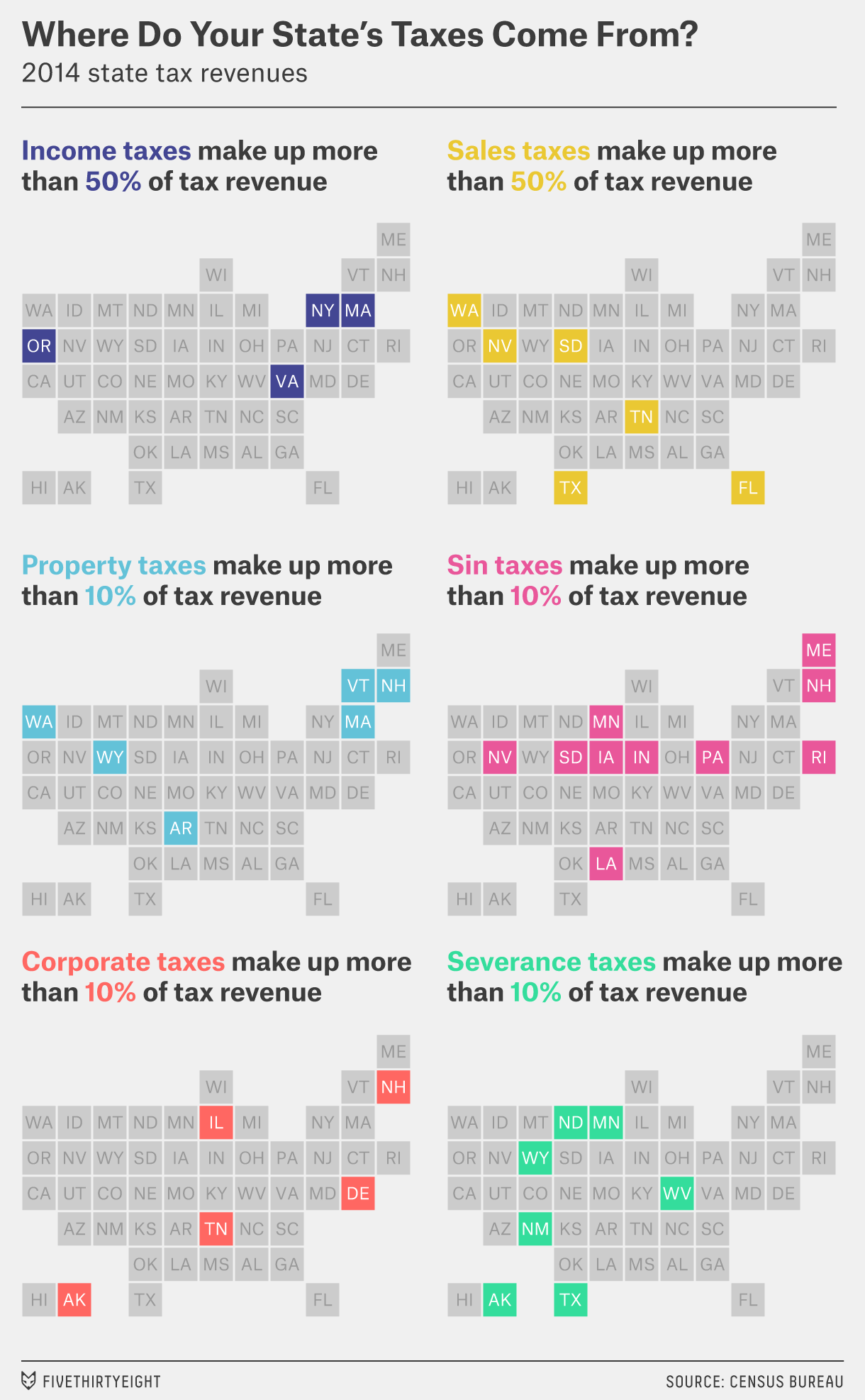 It might be surprising to see deep-red North Dakota at the top of the list. But that revenue isn’t coming from everyday citizens. It’s coming from oil companies: More than half of North Dakota’s tax revenue comes from so-called severance taxes, the result of the state’s oil boom. It’s a similar story in Alaska, which had the nation’s third-highest per capita tax revenue in 2014 (Vermont was No. 2). Severance taxes account for a whopping 72 percent of Alaska’s tax revenues.

For states that can’t rely on oil booms, there’s tremendous variation in where they get their revenue. Washington, for example, collects no income tax and relies on sales taxes for more than 60 percent of its tax revenue; neighboring Oregon is an almost perfect mirror image. Alaska and New Hampshire are the only states with neither an income nor a sales tax. (New Hampshire does tax dividends and interest.)2

There are several interesting outliers. Nevada, perhaps unsurprisingly, is the king of the “sin taxes,” thanks largely to the 13 percent of state revenue that comes from casinos and other “amusements.” Delaware, whose business friendly laws have made it home (at least on paper) to thousands of corporations, gets 40 percent of its revenue from corporate taxes and fees. And while property taxes are mostly a local matter in most states, Vermont gets more than a third of its tax revenue from property taxes.

A few less significant tidbits from the data: Wyoming leads the nation with $59 per person (man, woman and child) in hunting license revenue. New Hampshire is tops in tobacco revenue, at $162 per person. And North Dakota hits up its residents for the most in gas taxes: $308 per person.

To those of us in New York, meanwhile, it will come as no surprise that the Empire State collects a most-in-the-nation $2,176 per person in income tax.

See how your state ranks in major categories in our sortable table below, or see the full data set at the Census Bureau website. (The table below excludes some categories, so the rows won’t add up to 100 percent.)