Two weeks ago, ESPN1 released its “Baseball Tonight” (BBTN) 100, a player ranking based on votes from a panel of 40 experts. The panelists graded each of a group of 277 players on a 0-100 scale and then ranked them accordingly. For instance, Mike Trout of the Los Angeles Angels topped the list with a score of 98, while his most valuable player foil from recent seasons, Miguel Cabrera, came in second at 96.2

It’s just one group of ratings from one group of writers, former players and ex-pats of the game. But it’s a useful proxy to understand the difference between subjective valuations and empirical ones. I was interested in seeing what these experts’ preferences tell us about how they view the game. If the BBTN panelists were ranking players, surely some of their metrics would differ from more empirical measures. This isn’t to say that the experts didn’t look at statistics at all when voting, or that most of them aren’t knowledgeable about baseball’s growing culture of numeracy. Many of them are. But purely subjective votes like this bring out the emotional decisions inherent in evaluating players. I wanted to know where those emotions led the panel when — right or wrong — they strayed from the path of pure sabermetric orthodoxy.

To that end, I broke down what caused players’ BBTN scores to differ from what would have been predicted from their wins above replacement marks, an advanced metric designed to statistically measure a player’s on-field contributions in a logical, structured way. Think of this as an investigation into where sabermetrics and the “eye test” disagree.

For the 149 position players who logged at least 600 plate appearances from 2011 to 2013, I adapted per-plate appearance WAR rates to the same scale as the BBTN ratings.3 For instance, a rate of 6 WAR per 600 PAs, as Jose Bautista of the Toronto Blue Jays produced, would typically lead to a BBTN score of 78 — precisely the mark the panel gave Bautista. But not every player’s BBTN score lined up so perfectly with his WAR numbers. 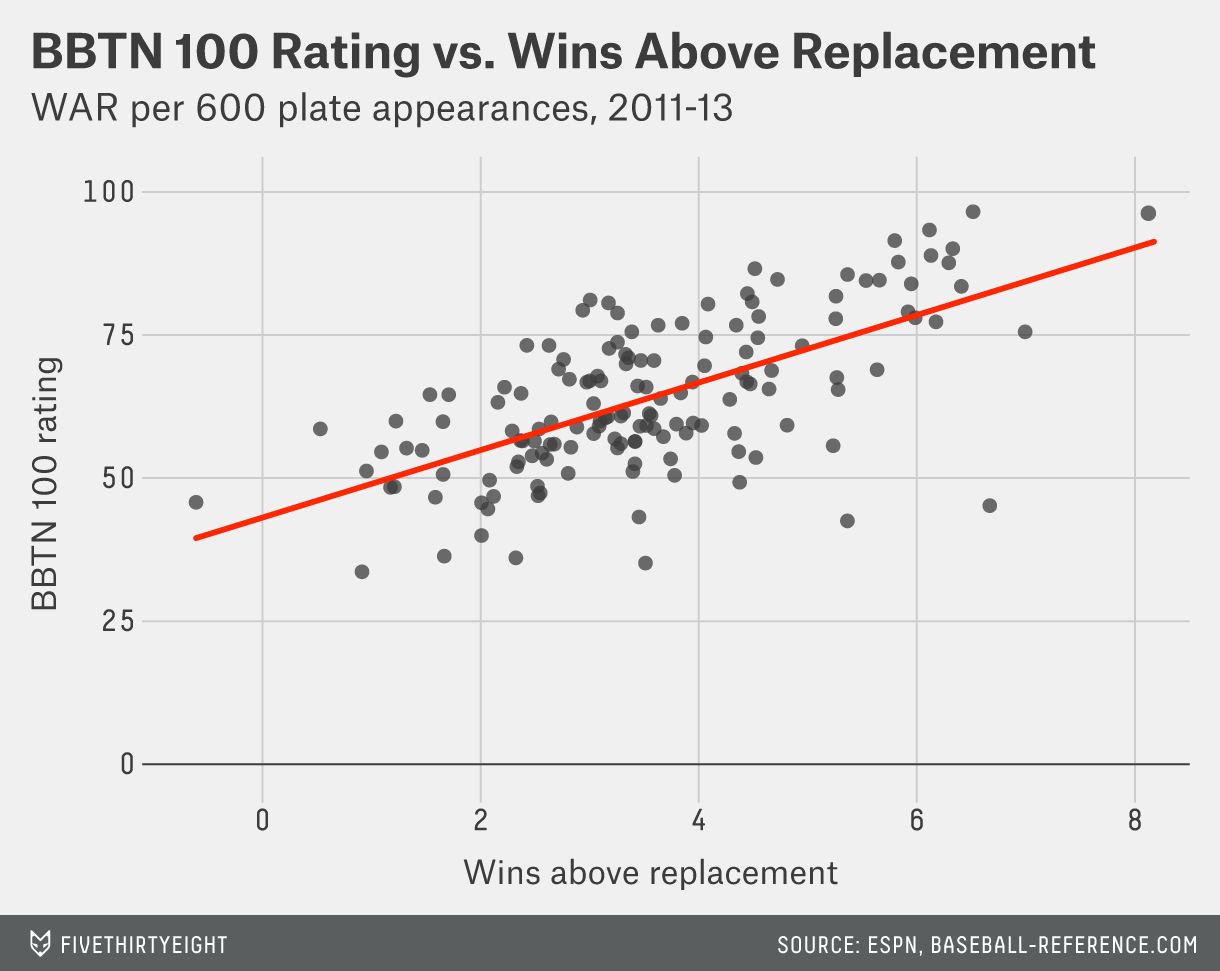 The Texas Rangers’ Prince Fielder generated just 3.3 WAR/600, which my calculations predict would lead to a BBTN rating of 62; instead, the voters deemed Fielder worthy of a 79, one of the most divergent ratings in the data set. Meanwhile, Craig Gentry of the Oakland Athletics created 6.7 WAR/600 — normally good for a BBTN score of 82 — but was rated a 45 by the panel.

These divergences are a proxy for over- and under-ratedness, where — for the purposes of this concept — a player’s accurate rating is just his WAR rate. If a player was overrated, his BBTN score would be higher than his WAR implied it should be, and the opposite for an underrated player.

But not every overrated player is overrated for the same reason. To understand if the experts are snookered by certain skills more than others, I gathered a bunch of numbers (including scouting-style defensive opinions) from Baseball-Reference and Fangraphs, looking to see which were significant predictors of how much a player’s BBTN rating diverged from his WAR.

Seven factors turned up as having a real effect on how a player was regarded by voters, relative to his sabermetric output.

All told, these results aren’t incredibly shocking. They exhibit a bias toward many of the traditional “tools” of scouting: hitting for average and power, speed, fielding and throwing. The voters’ bias isn’t conscious, but it is real. It’s indicative of all the factors that add up to our impression of a player, rather than his empirical value.

Sabermetrics isn’t automatically the “correct” answer in these comparisons, but it does offer a rigorous, systematic way of valuing players. Examining where human biases conflict with the statistics is a useful way to determine where our eyes’ prejudices lie.