Less than half the residents of the McAllen, Texas, metropolitan area felt safe “walking alone at night in the area where they live in 2012-2013,” according to newly released numbers from Gallup. McAllen was the only community Gallup surveyed where less than half the people felt safe.

But here’s the thing: The violent crime rate in the McAllen area, according to the FBI, was 319 incidents per 100,000 inhabitants in 2012. That’s below the national average.

The disparity in McAllen is an extreme example, but I’ve been looking into how people calibrate their fear of crime (for a forthcoming article), and I thought in the meantime it would be interesting to look at how good they are at it.

I compared Gallup’s data with the FBI’s violent crime rate statistics in 2012 for 167 metropolitan areas. There’s a relationship between the percentage of people who feel safe going out at night and the violent crime rate. But the correlation isn’t that strong. 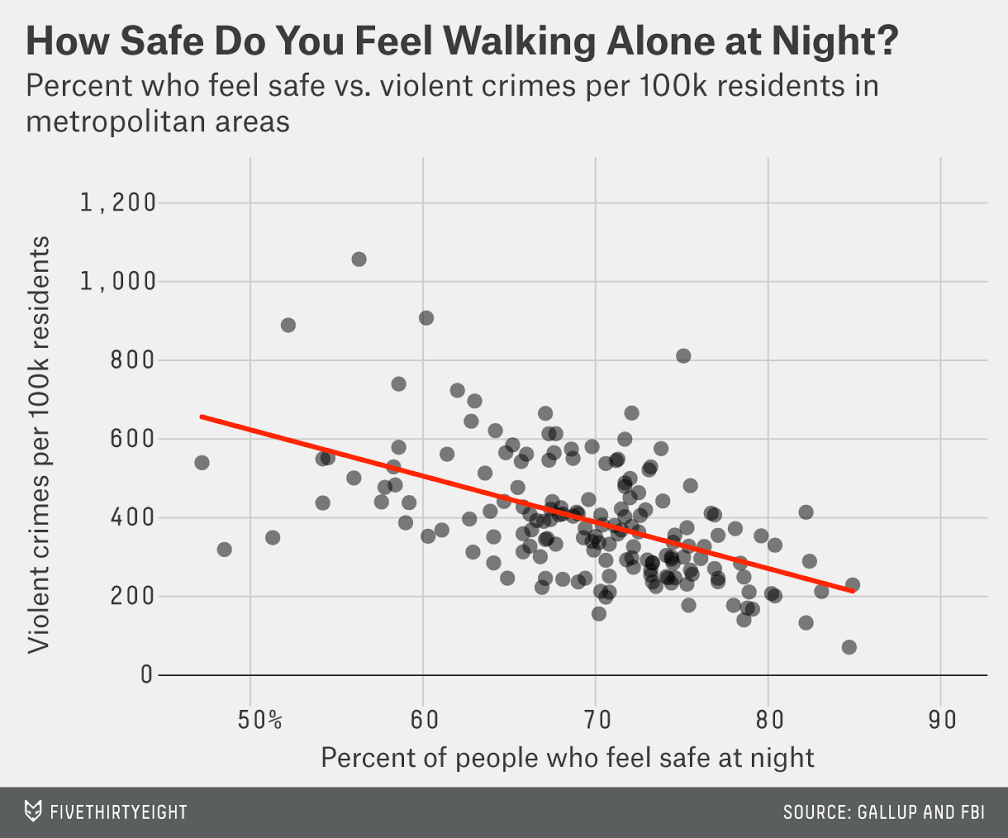 It seems people have a rough sense of the risk of crime, but they don’t calibrate it very well.

We can also look at where the greatest disparities were by using Gallup’s “felt safe” data to “predict” a violent crime rate, and then comparing that with the actual rate. Here are the 10 metropolitan areas where residents overestimated the risk to their safety — at least as measured by the violent crime rate — by the most. (Keep in mind, the FBI’s violent crime rate doesn’t represent every kind of risk.) 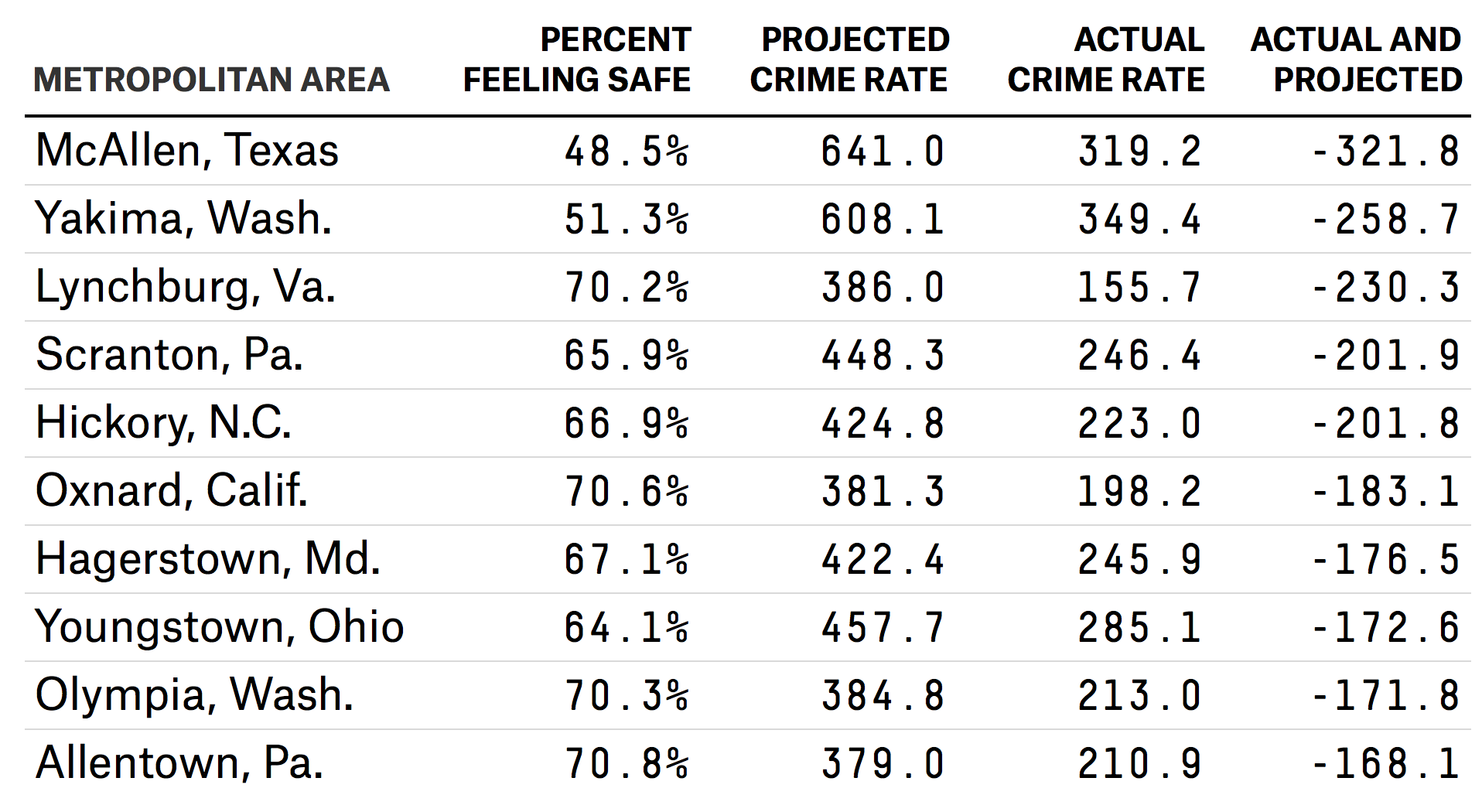 And how about the metropolitan areas where the crime rate is higher than you might expect given the percentage of people feeling safe at night? 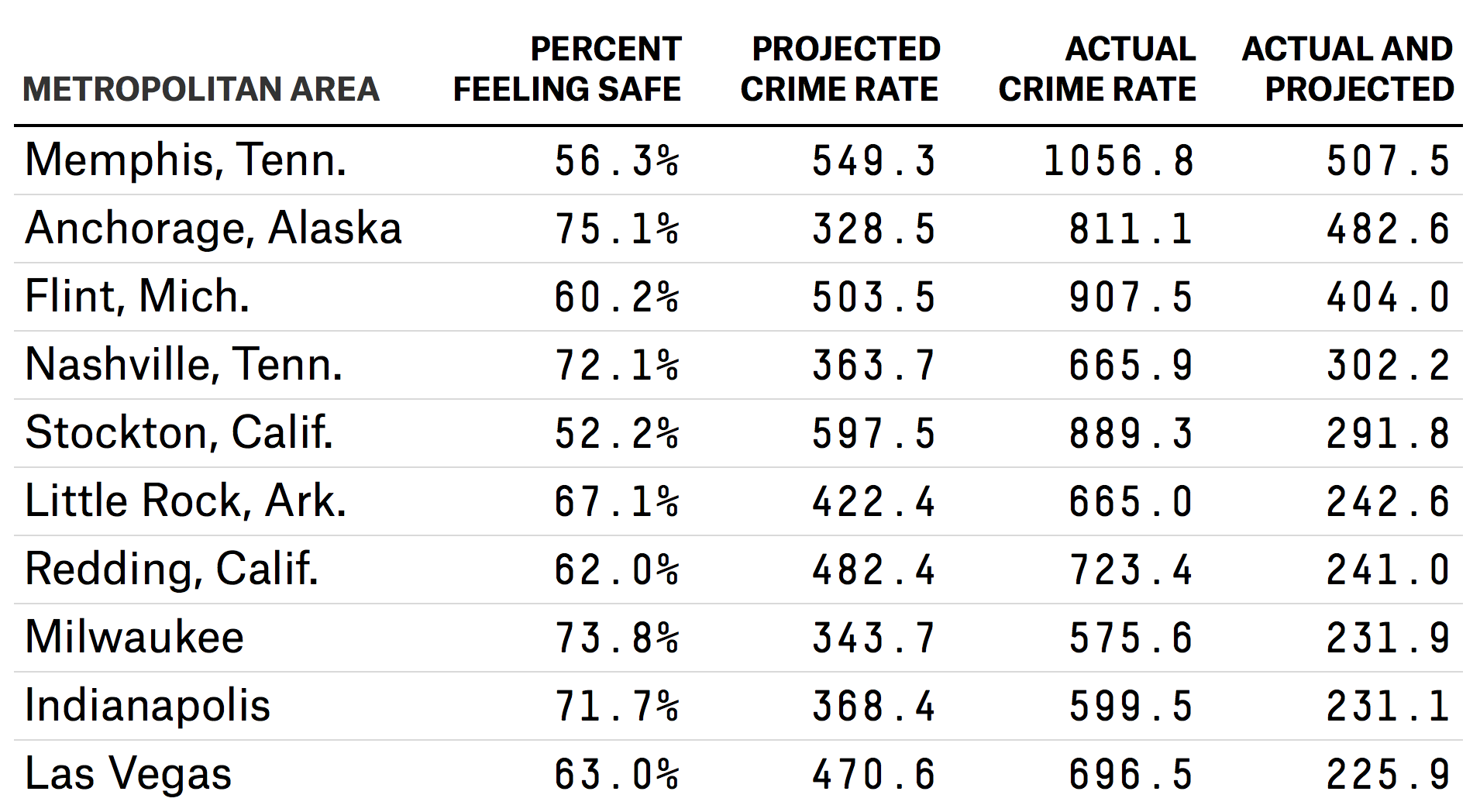 In the Anchorage, Alaska, area, 75 percent of residents said they felt safe, which ranks 35th of 167 in Gallup’s data set. Yet the violent crime rate in Anchorage is 811.1 per 100,000 inhabitants, the fourth highest.

The difficulty of gauging the crime rate is not surprising. As Daniel Lewis of Northwestern University’s social policy department told Slate in 2011, the odds of falling victim to a violent crime are low in almost any circumstance, and so most people cannot tell when crime rises or falls.

What causes people to overestimate or underestimate risk? That’s a complicated question, and one I’m still looking into.