Something weird will happen at a landfill in Alamogordo, N.M., on April 26: Spectators will gather to see an excavation that will reveal whether millions of “E.T.s” were buried there in 1983. Not progeny, of the extra-terrestrial himself, but unsold copies of an Atari video game that has been branded time and time again as the worst ever.

This is how the story goes: After the gargantuan success of the 1982 film (adjusted for inflation, it made $1.1 billion at the box office), gaming giant Atari decided that it wanted a piece of the sci-fi pie. After negotiations, it managed in August 1982 to get exclusive rights for an “E.T.” game for the Atari 2600 console. The problem was, that left designer Howard Scott Warshaw with only five weeks to get “E.T.” ready for the holiday season.

The result was a debacle. Users hated its graphics, bugs, bumpy transitions and “all-around awfulness.” But this is where it gets odd: Reports at the time claimed that while guards kept reporters and spectators at bay, Atari dumped 14 truckloads of gaming paraphernalia — including, or so legend says, millions of unsold copies of “E.T.” — in the Alamogordo landfill and covered it all with cement.

Until the big dig late this month, speculation will continue. But, in the meantime, was “E.T.” really the worst video game ever?

Our starting point is Wikipedia, the home of the crowdsourced, sometimes wobbly referenced opinion. We took titles listed under “commercial failures in video gaming” and checked how many copies were sold according to Vgchartz, a database of video-game-sales figures. We only included the first version released of a game and summed sales across all gaming systems to date (the titles listed below were manufactured for Atari 2600, Dreamcast, PC, Play Station 2, Play Station 3, Super Nintendo, Wii, X360 and Xbox).

Vgchartz’s data suggests that we should cut Atari a little slack. Racking up 1.97 million in global sales, “E.T.” far surpassed other games dubbed as commercial failures. Four games on the list didn’t even sell 10,000 copies. Atari’s “Pac-Man,” released in 1982, managed to sell 7.81 million copies to date (for reference, “World of Warcraft” has sold 10.05 million copies), but the company didn’t come close to selling the 12 million cartridges it manufactured because the home version was thought to be such a poor substitute for the arcade game.

Here are the “commercial failures” that sold at least 10,000 copies: 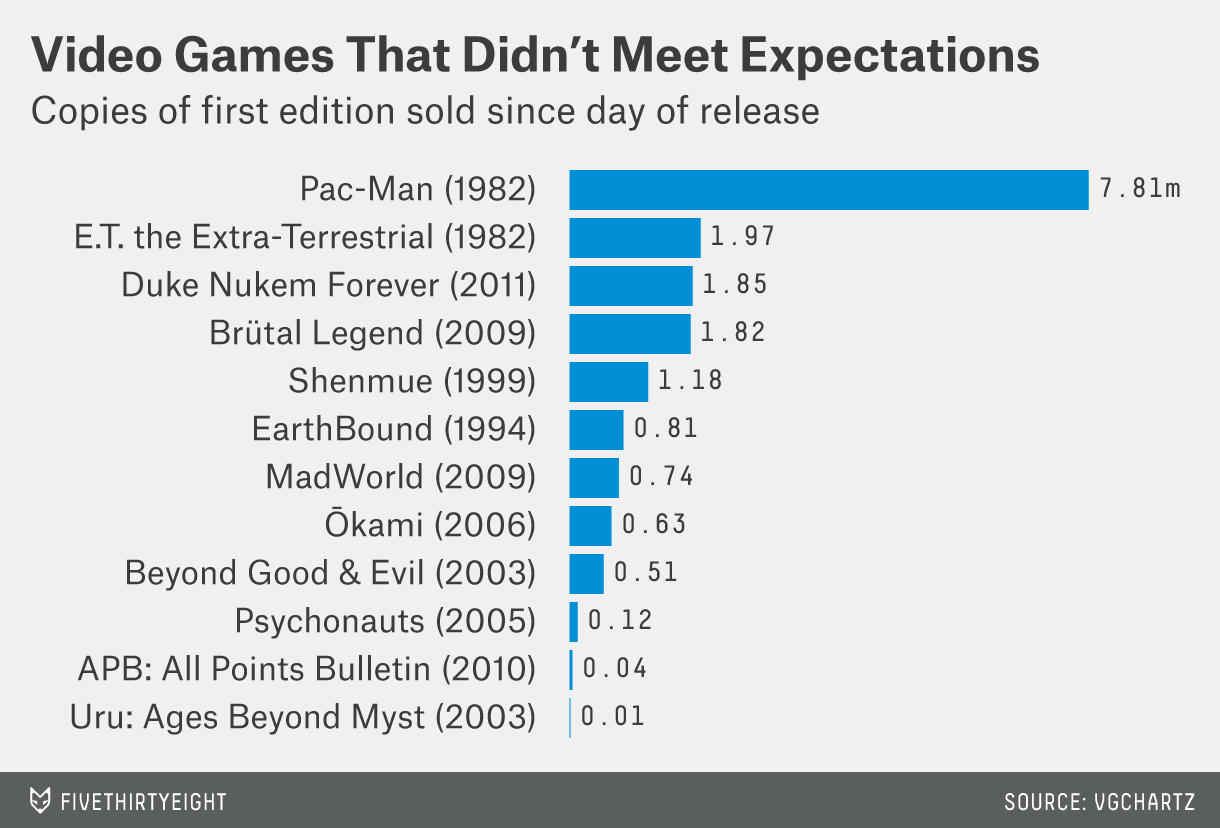 So, why is “E.T.” in the “Encyclopedia of Video Games” as a legendary failure? Over-heightened commercial expectations. By 1980, Atari was labeled as the fastest-growing company in U.S. history. Its operating income leaped from $174,000 in 1976 to $323 million by 1982 (but “E.T.” together with several other management missteps led to a $539 million loss just 12 months later).

Expectations of the game itself were similarly high. Atari reportedly ponied up $22 million for the rights to the brand and was so sure it would be a success that it produced 4 million cartridges. (Those cartridges cost about $4.50 to $6 apiece to manufacture but had a retail price of $39.95.)

Regardless of whatever’s found in that landfill in New Mexico, the data shows that the object of our criticism shouldn’t be the “E.T.” game, it should be the expectations around it. If you’re in the area and want to watch the excavation, here are the details.