The extremely tight runoff elections for Senate in Georgia could end up being the two most expensive Senate races in U.S. history, and money is already pouring in.

In less than three weeks (from Nov. 4 through Nov. 23), grassroots fundraising platforms ActBlue and WinRed funneled a combined $167.6 million directly to the four candidates’ campaigns.1 And this doesn’t even include the money candidates have raised through more traditional means (e.g., large donors writing checks), which we won’t have data for until Dec. 24 (when the next Federal Election Commission reports are due), or money being raised and spent by outside groups like super PACs. Eventually, that will probably add millions of dollars to these totals (especially for Republican Sens. Kelly Loeffler and David Perdue, for whom online donations were a minority of total donations in the first round of voting).

That is far more than the same candidates raised on these platforms before the general election. In fact, from Sept. 1 through Nov. 3, the four campaigns raised only $50.4 million on ActBlue and WinRed — less than a third of the money in more than triple the amount of time. As you can see in the chart below, donations skyrocketed a few days after Election Day, around the time it became clear that the runoffs would decide which party controls the Senate in 2021. The candidates raised a combined $46.1 million on Nov. 8, 9 and 10 alone. That is, in a word, bonkers.

But will all that money really matter? Most political science research has found that campaign spending isn’t actually that big of a factor in partisan elections. And while a large number of individual contributions can be a sign of grassroots enthusiasm for a candidate (which, in turn, can predict electoral success), in this case most of those contributions are coming from out of state. That means those eye-popping numbers might not tell us anything about how voters in Georgia feel about the candidates.

[Related: Why The GOP Isn’t Able To Win The Popular Vote]

For example, 96 percent of the money Democrats Raphael Warnock and Jon Ossoff have raised for the runoff through ActBlue have come from out-of-state donors. They’ve raised a combined $4.3 million2 from Georgians on the platform, which puts the state seventh in cash donated to its own races via ActBlue, behind California ($25.8 million), New York ($10.6 million), Washington ($6.2 million), Massachusetts ($5.8 million), Texas ($4.9 million) and Florida ($4.8 million). 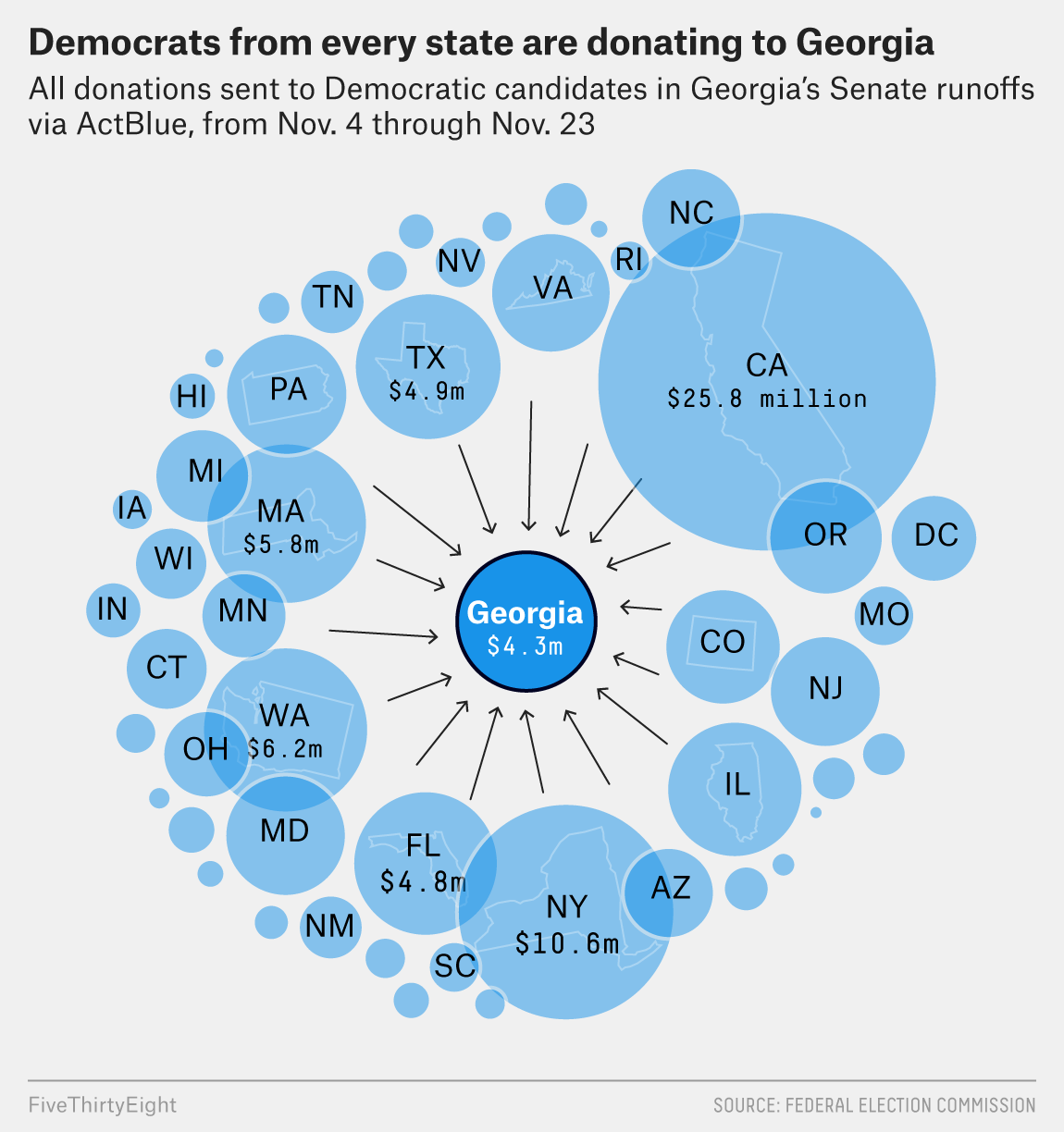 Of course, a lot of that is because states like California and Texas simply have a lot more people than other states. But even on a per capita basis, Georgians were only the 11th-biggest contributor to Warnock and Ossoff on ActBlue, giving $401 per 1,000 people. In fact, the 10 states with more donations per capita are all known for being Democratic bastions, with Massachusetts ($847 per 1,000 people) and Washington ($811 per 1,000 people) leading the way.3

But it’s not just Democrats who are receiving a lot of out-of-state money. A full 92 percent of Republicans’ runoff donations on WinRed have come from outside Georgia, too. And their top source of cash has also been California ($6.8 million), followed by Texas ($6.6 million), Florida ($6.5 million) and then Georgia ($4.4 million4).

[Related: How The 2020 Election Changed The Electoral Map]

So once you rummage through those jaw-dropping receipts, you discover that Warnock and Ossoff have gotten about the same amount in online donations from Georgians as Loeffler and Perdue have ($4.3 million vs. $4.4 million). While the Democrats probably aren’t disappointed to have so much more out-of-state money at their disposal, it might not be as helpful as you’d think for winning votes in Georgia itself. After all, Democrats consistently trounced Republicans in the fundraising battle in 2020 Senate races but still wound up losing most of the competitive races. It’s worth remembering, though, that the data we have so far is incomplete; ActBlue and WinRed are just two of many sources for campaign cash. There’s also still a long way to go (27 days, in fact) until the finish line in Georgia, so it’s still anyone’s race — regardless of who is raking in the most money.

Chris Zubak-Skees is an independent data journalist who previously worked at the Center for Public Integrity and the Sunlight Foundation. @zubakskees