Buried in the latest NBC/WSJ survey (.pdf) is a question asking voters who they blame for the country’s economic problems. Currently, 8 percent of voters say that Obama’s policies are “mostly responsible” for the poor economy and another 6 percent blame him in part. But the longer the crisis lasts, the less patient voters will be:

We can translate these responses into a graph — doing our best to translate the poll’s somewhat vague wording into precise numbers — and compare them to a related question about when voters expect the recession to end. 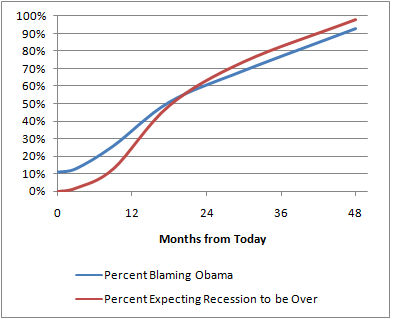 Obama crosses the 50 percent threshold at almost exactly 18 months from now, which would mean September 2010. At that point, a majority of voters say they will hold Obama accountable for the performance of economy.

Perhaps not coincidentally, 18 months is also about the point at which a majority of voters expect the recession to have ended. By comparison, of the several dozen economists polled in the Wall Street Journal’s monthly forecasting survey, 65 percent expect the recession to have ended by the third quarter of 2009, and 100 percent anticipate its conclusion by the end of 2010. (As a caveat, the Journal’s forecasters are generally a bullish bunch). 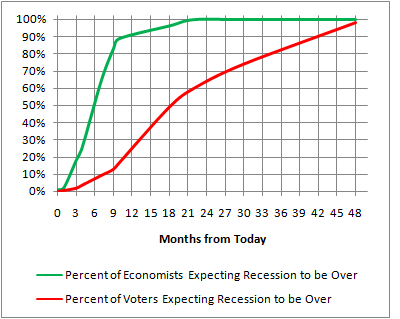 Cutting against this somewhat are two other factors. Firstly, it is generally believed — and I’ll find a link for you on this if I can — that voters react slowly to changes in economic well-being. That is, if the economy exits the recession in July 2010, it might take a few months for the voters to notice, and this might or might not be soon enough for the Democrats to avoid blame at the midterm elections. Secondly, the unemployment rate — perhaps the economic indicator that ordinary voters are most concerned with — has been among the last things to recover in the so-called jobless recoveries following recent recessions. It’s plausible that GDP growth will dip back into positive territory in the third quarter of 2009, for example, but that we won’t see a material rebound in the employment numbers until months later.

On balance, the public seems prepared to be pretty darned patient with Obama. The question is whether public will in fact be as judicious as it expects itself to be after some number of additional months of dire economic headlines. On that front, I’m a bit skeptical, and I’d expect Obama’s approval rating to lose a couple of points each month until the recession ends. This is why it makes a lot of sense for Obama to be pursuing a very ambitious agenda right now. If the economy recovers within the next year or so — beating voters’ expectations — then Obama’s approval ratings will probably wind up being quite high. But until that recovery occurs, Obama’s approval ratings are likely to get worse before they get better.