A generation ago, people making the minimum wage were largely teenagers. Today, as President Obama pushes to give 25 million low-wage workers a raise, that’s no longer true.

The minimum wage debate hinges on an essential question: Who would be affected by an increase? If minimum-wage workers were mostly teenagers and others supplementing their household income, as Republicans have often argued, a raise would have different implications than if these workers were mostly adults struggling to raise a family, as many Democrats contend.

Census data reveals that more than half of all workers now earning below President Obama’s proposed minimum wage of $10.10 per hour are trying to support themselves. It’s true that low-wage workers tend to be younger than the population as a whole, and that many of them are teenagers. But a significant and growing minority are also trying to raise children of their own.

Finding information on who would be affected by an increase in the minimum wage is surprisingly difficult. The Bureau of Labor Statistics publishes an annual report that gives a breakdown of minimum-wage earners by age, sex, education and other factors. But the report does not distinguish, for example, between a 22-year-old single mom trying to feed her kids and a 22-year-old college student working a few shifts to keep her debt manageable.

Worse, the official report provides no information on people who earn just above the minimum wage — even though that group dwarfs minimum-wage workers. To learn more about this larger group, we have to look at the Current Population Survey, a monthly review conducted by the Census Bureau, which allows for a much more detailed analysis of the low-wage workforce.1

According to the survey, in 2013 more than 25 million people earned less than $10.10 an hour, which amounts to an annual salary of roughly $21,000. That’s nearly eight times the number of Americans who work for the current minimum wage of $7.25 an hour or less.2 Low-wage workers tend to be older than their minimum-wage counterparts: Nearly 60 percent, or 15 million Americans, of this group is 25 years old or older compared to about half of minimum-wage workers.3

What we really want to know, however, isn’t how old these workers are — it’s how many of them are trying to support themselves and their families on these wages. To estimate that number, we first need to define what we mean by “supporting themselves.” We’ll start by eliminating both teenagers and retirees from our count, limiting ourselves to people between the ages of 20 and 64. A substantial — and increasing — number of young adults are living with their parents, so we’ll also exclude anyone under 30 whose parent is in the same household.4 A trickier question is how to handle multiple-earner households; we’ll include anyone who is unmarried, whose spouse is absent or doesn’t work, or whose spouse is also a low-wage worker.5

Based on that definition, there were 13 million Americans, out of the 25 million low-wage earners, who were trying to support themselves on less than $10.10 per hour in 2013.6 Some 4.5 million of them were also raising children.7

Whether those numbers seem high or low is a matter of perspective. It’s true that there are millions of Americans trying to support themselves on wages that barely clear the poverty line. It’s also true that the benefits of a wage increase would flow to millions of people who have other sources of income. That’s one reason some economists prefer programs like the Earned Income Tax Credit, which is more narrowly tailored to benefit needy families, to any increase in the minimum wage.

But one thing is clear: A larger share of low-wage workers are trying to support themselves today than in past years. About 39 percent of workers earning under $10.10 an hour — adjusted for inflation — were supporting themselves in in 1990, compared to more than half today.8 Back then, nearly a quarter of low-wage earners were teenagers, compared to just 13 percent today.9 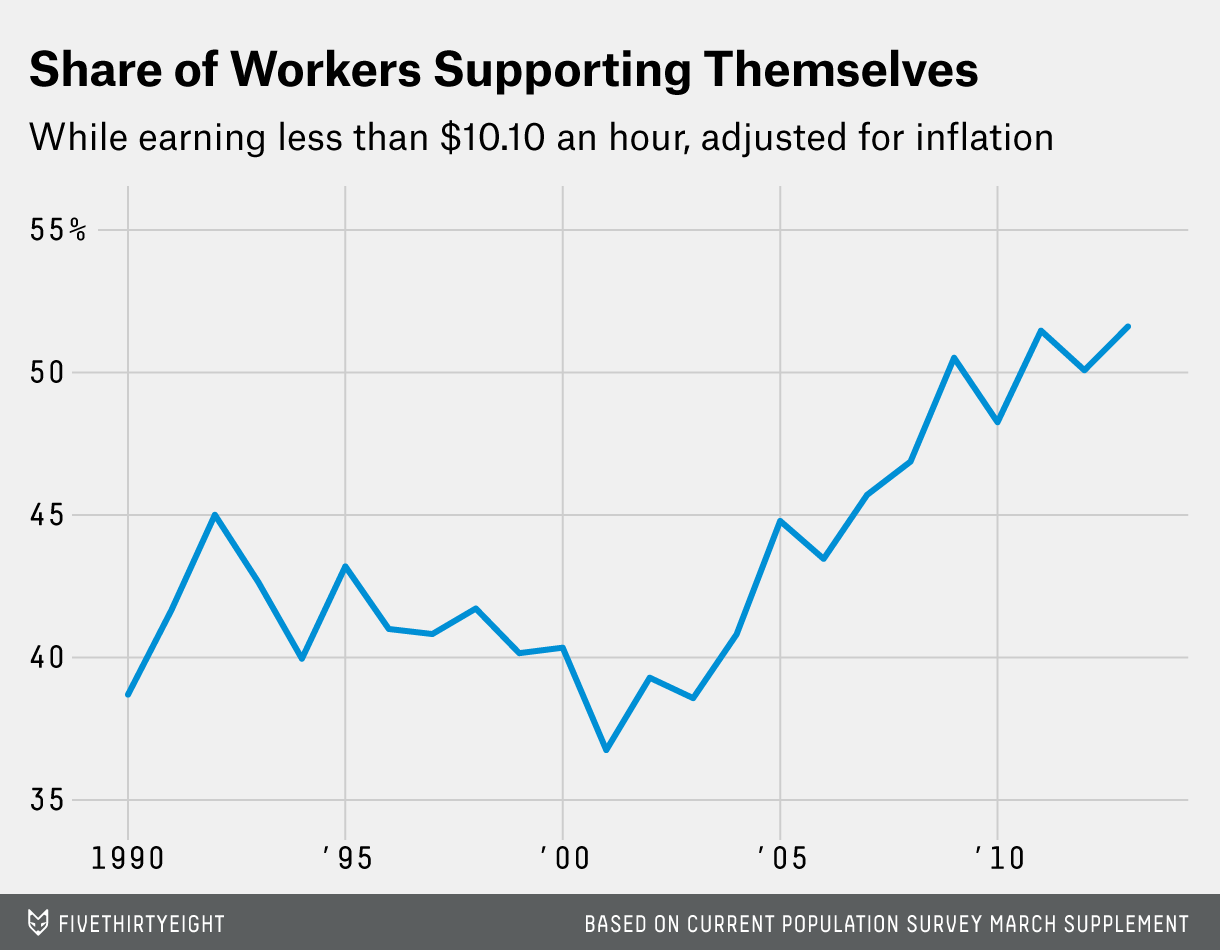 The change over time reflects deeper shifts in the U.S. labor force. Rising rates of college attendance mean that far fewer young people are working — at any wage — than in past decades, so it’s natural that they would also make up a smaller share of the low-wage workforce. At the same time, the service sector, which employs the vast majority of minimum-wage workers, has grown as a share of the overall economy, meaning industries such as fast food that were once the province of teenagers have become major employers of adults of all ages.

Ultimately, low-wage workers are the victims of a broader trend of stagnant wages that stretches back long before the most recent recession. Adjusted for inflation, average hourly wages of all non-managerial workers rose less than 1 percent between 2002 and 2007, when the recession began, compared to nearly 7 percent growth in the five years before that. Economists aren’t sure what’s behind that stagnation: outsourcing, automation, the decline of unions, changes to the tax code, or, more likely, a combination of several factors. But whatever the causes, anemic earnings growth means more people are trying to get by on low wages.