It’s the middle of April — and it’s snowing as I write this in New York City. This isn’t quite as unusual as you might have gathered from the reaction on Twitter. Based on data collected in Central Park dating to the 1860s, 64 percent of New York Aprils have experienced at least some snow, although it usually comes earlier in the month.

Nonetheless, New York’s snowfall patterns throw off my Midwestern sensibilities. As compared to the winters I grew up with in East Lansing, Mich., and Chicago, the snow here seems to arrive too late and stay too late.

Chicago’s peak month for snow is January — it snows an average of 10.1 inches. This doesn’t make winter much fun to experience. But it gives the season a certain symmetry, a bell curve centered around the turn of the year. By mid-to-late January, you’re over the hump. Michigan’s snowfall patterns are similar, so I’d assumed this it how it is just about everywhere.

But like snowflakes, it seems, no two snowfall patterns are alike. In New York, 51 percent of the snowfall occurs in February or later. (Meteorologists define snowfall totals by the period from July 1 to June 30.) February is the snowiest month in New York, at an average of 8.8 inches. March (4.9 inches) is almost as snowy as December (5.6 inches). April snow is rare, but no rarer than in November. 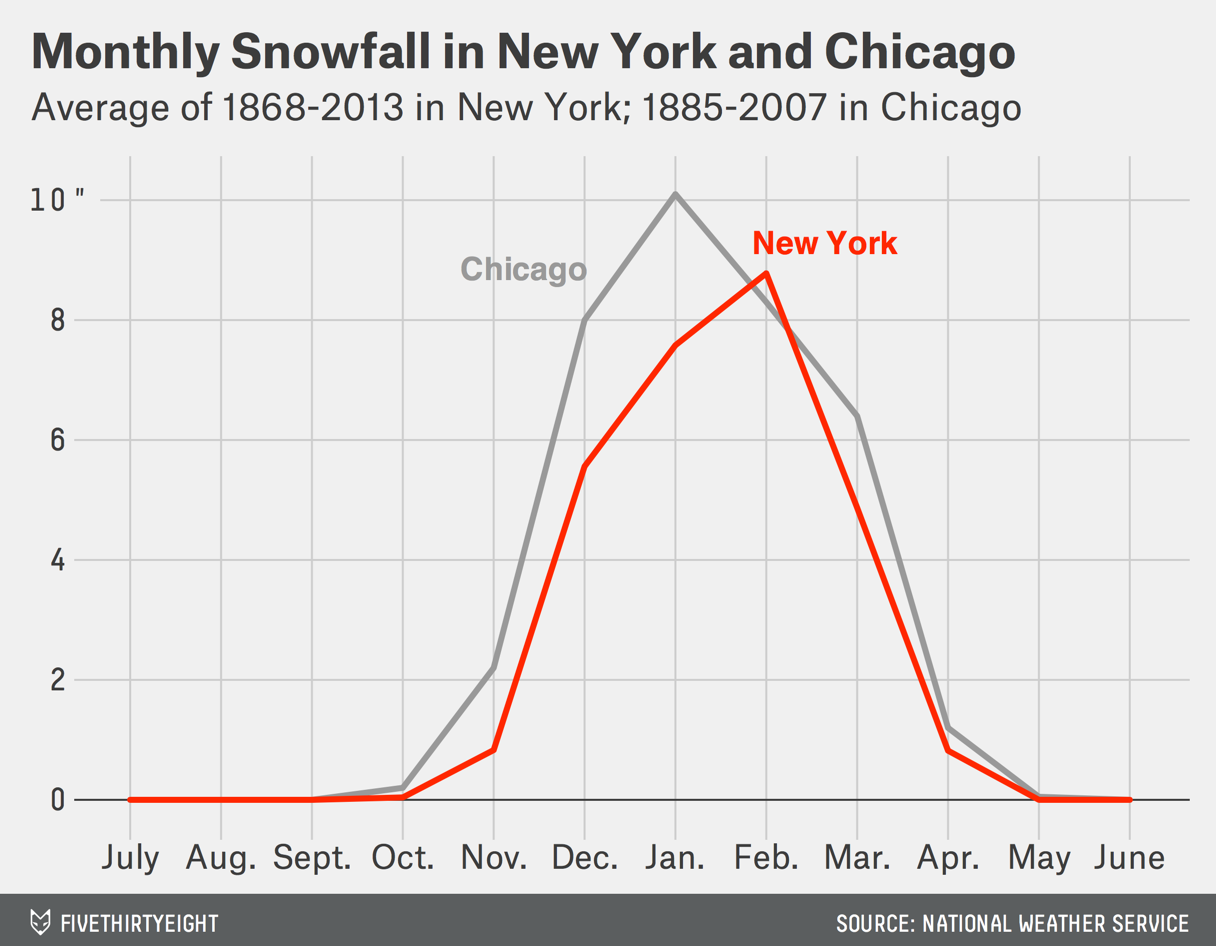 While New York’s snowfall is shifted late in the season, Buffalo’s comes early. There, 37 percent of snow occurs before Jan. 1, as compared with 29 percent in Chicago and 23 percent in New York. This is not such a relief, however: Buffalo is so snowy overall that it gets more snow than New York and Chicago combined from Jan. 1 onward. 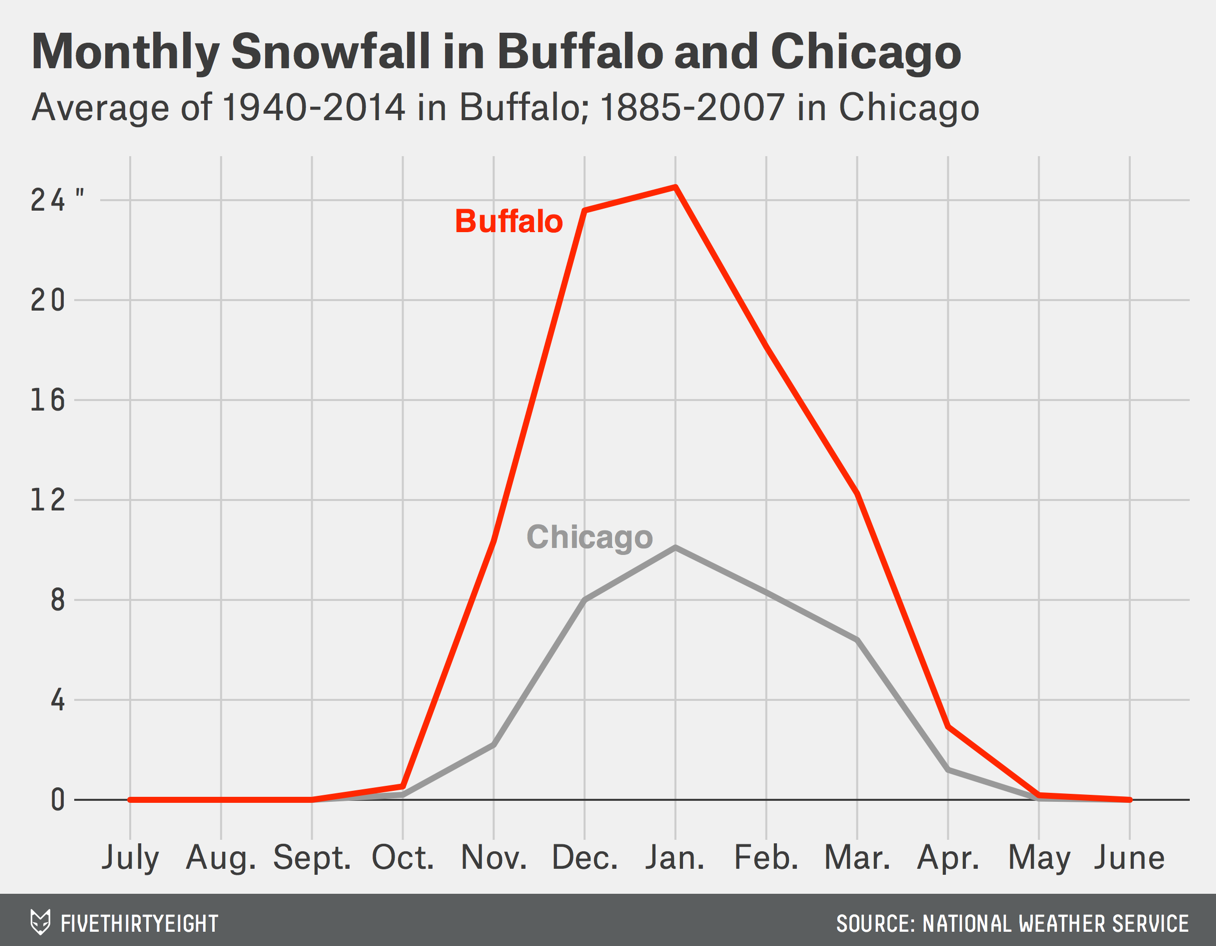 Minneapolis has it a little easier. In the dead of winter there, the air is often too dry to carry much moisture, so the city has a long, flat snowfall peak that persists from mid-November through late March and looks something like Devils Tower in Wyoming. (Oddly, it snows slightly more in March than in February there.) 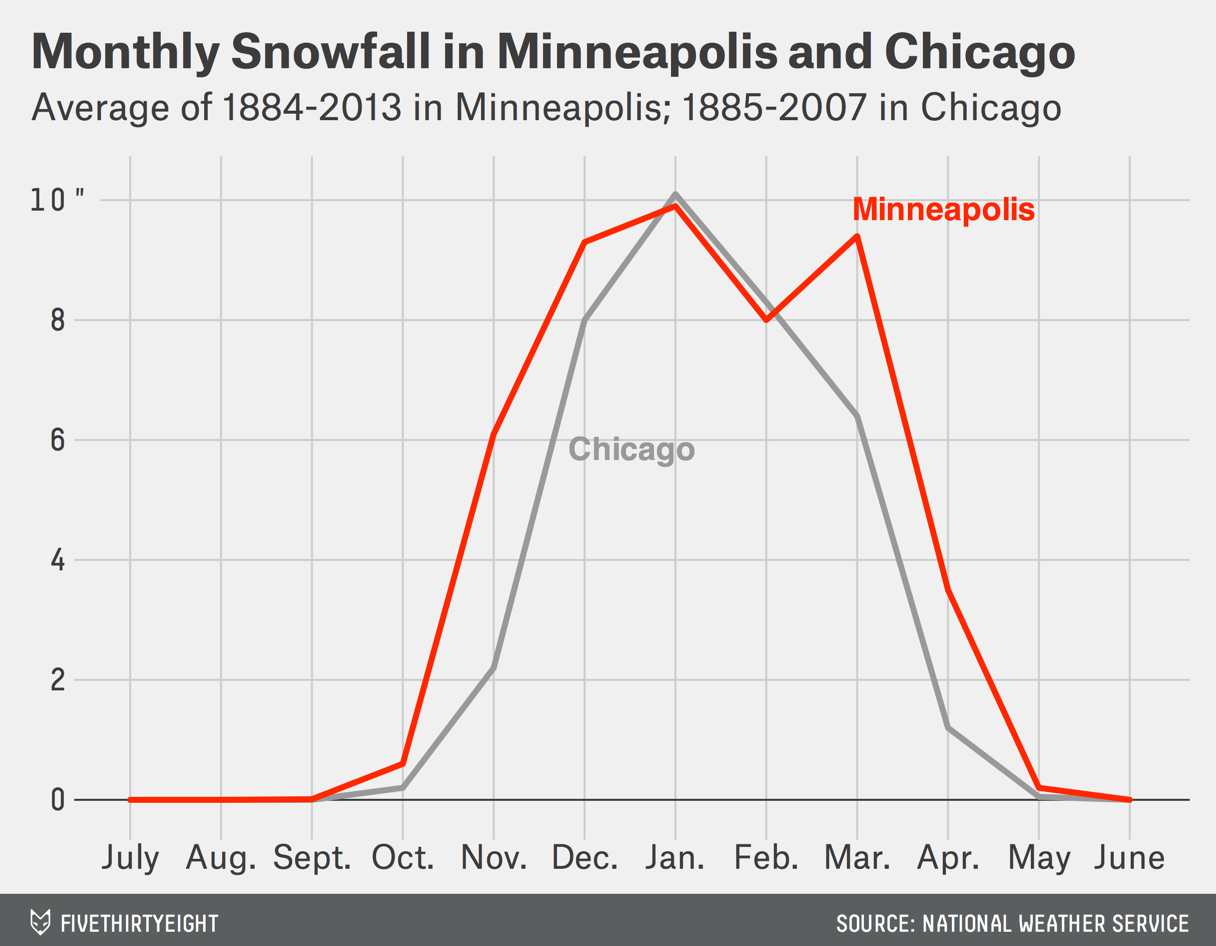 But Denver’s snowfall pattern might be the most unusual of all. The Mile High City has a dual-peaked distribution, with the first peak of snow in November and December, and a second and higher peak in March and April. It snows an average of 9 inches each April in Denver — more than in Buffalo, Chicago, New York and Minneapolis combined. 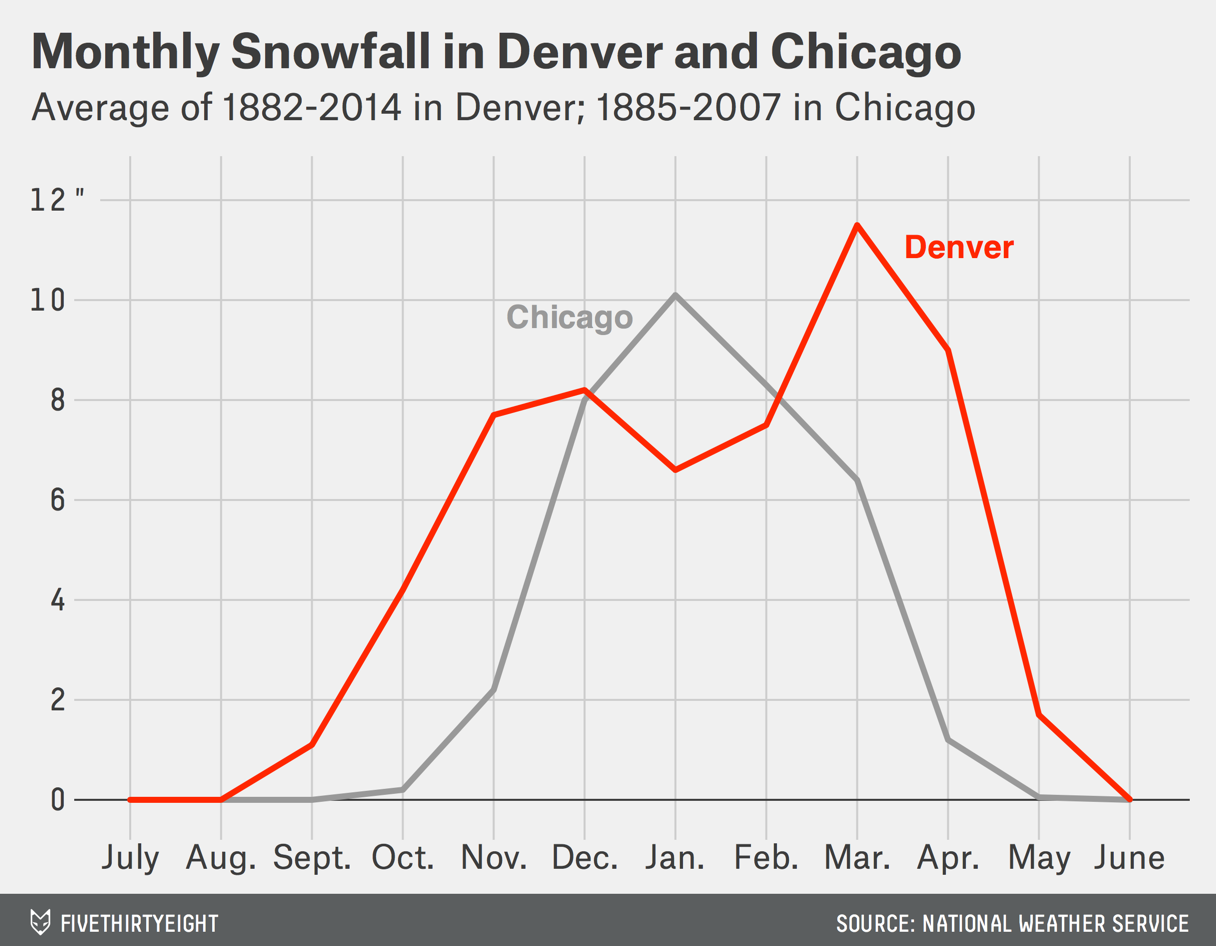 What accounts for Denver’s precipitation patterns? The Western Regional Climate Center has a good explainer. Denver, being a long way from moisture sources such as the Pacific Ocean, is among the drier major cities in the United States. Most storms travel west to east in the Northern Hemisphere, and most of their moisture is soaked up by the Rocky Mountains before they reach Denver. But spring and summer can bring warm, moist air from the south, sometimes producing violent storms. By May and June, most of that precipitation will fall as rain, but it can come as snow — sometimes blizzards — early in Colorado’s spring.