This week, sparked by WH Press Secretary Robert Gibbs’s “in play” comment on Meet the Press, chatter and speculation about a possible Republican takeover of the House rose to new heights. As it happens, I had been working on an invited piece for Larry Sabato’s Crystal Ball site at the University of Virginia in which I examine regional differences between the Democrats’ House majority heading into the 2010 midterms and the one they had on the eve of their epic, 1994 midterm catastrophe. That piece, entitled Republicans’ Regional Recipe, ran yesterday, and I’ll summarize the key parts of it first, and then share some addition reflections for which I didn’t have space in the original analysis. 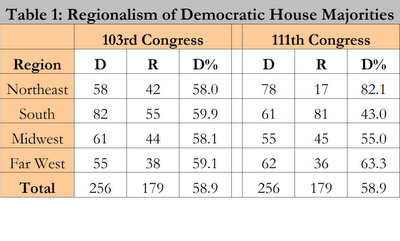 To begin, for comparative purposes it’s eerily convenient that the Dems headed into their 1994 slaughter with the same number of seats they do today: 256.* Though same in number, the two Democratic coalitions are not the same geographically, as Table 1 shows. Compiling the data, I knew that the Democratic caucus today would be less southern, more northeastern, and more western than it was 16 years ago. But what amazed me was just how regionally uniform the Democratic majority was back in ’94: Remarkably, in every region the Democrats controlled between 58 percent and 60 percent of the seats. That’s hardly the case for Speaker Nancy Pelosi’s coalition today, for which the Democratic share ranges from a southern low of 43 percent to a northeastern high of 82 percent. Obviously, there is more than one way to reach 256. (A number that itself freaks me out a bit because it is the square of 16, and thus also 2 raised to the eighth power.)

What I then did, using CB analyst Isaac Wood’s current House race ratings, was compare what the House in a potential 112th Congress would look like under two scenarios: a “regular wave” scenario in which the Democrats hold or win all “likely” or “leaning” races, the GOP does the same, but the GOP wins all “toss-up” contests (net GOP gain: 36 seats); and another, “big wave” scenario in which the GOP wins all of the above plus swings any races presently ranked as “leaning Democrat” (net gain: 61).

What’s interesting about the two scenarios is the geographic distribution of the potential gains. Short story? In the latter, “big wave” scenario the Republicans double their pickups in the Northeast and Far West, giving them enough to build a majority, whereas they fall short in the regular wave scenario because southern and midwestern seats captured (or recaptured from 2006 or 2008) are insufficient to elevate John Boehner into the Speaker’s office, as you can see in Table 2 below. 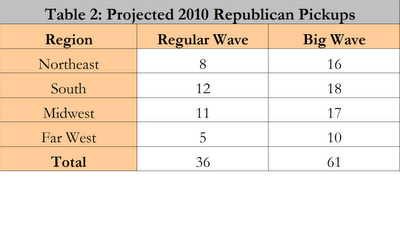 What I didn’t have room for, and Isaac and Larry asked me not to bog the piece down with, was an examination of specific House contests. (There’s just too many House seats to cover, and that would make the piece longer and noisier.) But with the benefit of a bit more follow-up space here, I wanted to examine just a handful of those “leaning Democratic” House seats that, in a big or at least big-enough-to-flip-the-chamber scenario, would be part of the new Republican majority for the 112th Congress.

Three of Wood’s “leaning Democratic” seats in particular jumped right off the ranking sheet for me: Arizona 5, Michigan 9, and New Jersey 3. Why? Because all three have about the same white share of the population (roughly 80 percent), which means incumbents there are unlikely to be saved by an uptick in post-Obama, non-white voter turnout, or damaged by a midterm drop-off in non-white voters; and all three feature above-national-average household incomes. In other words, these are not working-class white districts more likely to fall because they bear more of the brunt of the economic recession, nor are they districts with significant non-white populations that may hold the line for the Democratic House candidates running there. If affluent, college-educated white voters of what Ron Brownstein calls the “Diploma Belt” variety turn against the Administration and the Democrats, you probably get Speaker Boehner; if not, you probably keep Speaker Pelosi.

To be sure, if control of the House is very narrowly decided come November, the result will be “overdetermined,” in the sense that any one of a number of demographic or regional or economic splits can be cited as the reason the GOP did or did not swing enough seats, even though it’s never that simple. Still, remember that the coalition Barack Obama assembled two years ago depended heavily upon non-white voters and affluent white voters. We can expect a drop-off of some, uncertain magnitude among non-white voters, especially those who turned out for the first time in 2008. What will be equally interesting, and perhaps pivotal, is what the rate of defection (or abstention) will be among affluent whites this year–and districts like AZ-5, MI-9, and NJ-3 this November will provide part of the answer.

*NB: For simplicity’s sake, and to have the same 435-seat baseline, I simply counted any vacant seats, then or today, as belonging to the party that last held them.