Suppose that, lucky you, you’re the coach of a team given a No. 8 seed in the N.C.A.A. tournament bracket.

This is a less-than-ideal position: provided that you win your first-round game, you’re due to face the No. 1 seed in the second round.

But a friend of yours — another coach who owes you a favor — calls you with a “Let’s Make a Deal” proposition.

His team is seeded No. 10 in another regional. He offers to swap with you: you get his No. 10 seed and he gets your No. 8. The teams in each region are otherwise about as strong as one another.

Are you better off switching?

The answer is almost certainly yes: the No. 10 seed is intrinsically a better position than the No. 8 seed. So, for that matter, is the No. 11 seed. The 12th seed is also better than the No 8. As are the 13th and 14th seeds. And possibly even the No. 15 seed, depending on your objective.

Welcome to the strange intersection of bracketology and bracketonomics, in which the worse a team’s seed, the better off it may be.

The root of the problem is that the relationship between team strength and seeds is not linear. Instead, the No. 1 seeds (and to some extent the No. 2 seeds) are often quite a lot better than anyone else in the field. They are also especially dangerous in the first two rounds because, under the “pod” system the N.C.A.A. adopted in 2002, these teams will almost always play within a few hundred miles of their campuses in what may amount to a de facto home game. It is worth going to some length to avoid facing one of these teams as long as possible, hoping that you get lucky and that someone else knocks them off.

The graphic that follows shows the average computer power rating, by seed, for teams playing in the tournament since 2003. These ratings also include a geographic adjustment. In the first two rounds, as we’ve mentioned, the No. 1 and No. 2 seeds (and sometimes the No. 3 seed) are generally placed at tournament sites that are close to their campuses, which further increases their advantage.

(Like the power ratings that we use to generate our bracket projections, these are actually a composite of four different computer ratings, and are scaled to be approximately equivalent to Jeff Sagarin’s ratings for USA Today. The difference in ratings between two teams is equivalent to a point spread: for instance, a team with a rating of 92 is a 10-point favorite over a team with a rating of 82.) 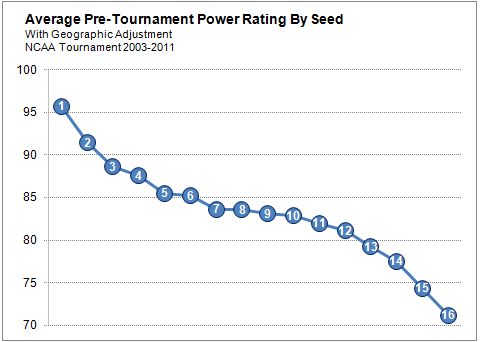 There is, however, some noticeable decay in team quality in the bottom three or four seeds, which may be teams that qualified automatically out of very weak conferences, sometimes — especially in the case of No. 15 and No. 16 seeds — as a result of having won their conference tournaments as an underdog.

All of this is a consequence of the fact that the distribution of basketball teams resembles a bell curve (normal distribution). The handful of great teams on the tail end of the curve are quite a lot better than the abundance of decent teams toward the middle.

Now let’s consider what happens when we take a team with a given power rating — specifically, we’ll use a team with a power rating of 85, equivalent to a school like Arizona this year — and slot it at different places in the bracket. We’ll assume that the power ratings for the other 15 teams in its region are at the historical averages for their seeds.

In the first round, the implications are quite straightforward: the higher the seed, the better off the team, since the weaker its opponent will be. 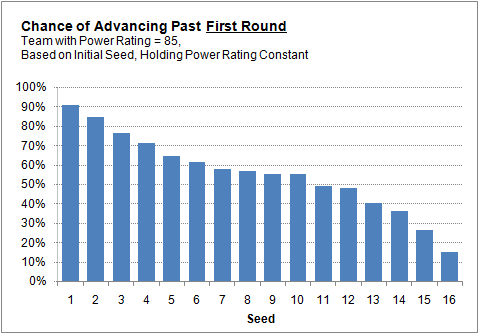 Let me be very clear about what this chart means. It is not the chance that a No. 1 seed, for example, will win its first round game. Instead, it is the chance that a decent team with a power rating of 85 would win the game if it took the place of the No. 1 seed in the bracket — the “Let’s Make a Deal” Scenario. Our hypothetical team — let’s call it Arizona — would have about a 90 percent chance of winning if it were seeded as a No. 1, because it would face a weak No. 16 seed. But the same team would have just a 15 percent chance of winning as a No. 16 seed, since it would play a No. 1.

Things get quite funky, however, when we advance one round further. 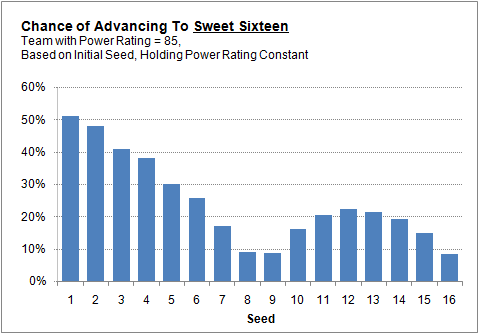 A team like Arizona would have a considerably better chance — about two-and-a-half times better, in fact — of winning its second round game and advancing to the Round of 16 as a No. 12 seed than as a No. 8 or No. 9 seed. This, of course, is because it has not yet had to face the No. 1 seed.

Already at this stage, we have what I would consider to be a pretty significant problem. The ultimate goal is for a team to win the national championship. But reaching the Round of 16 and getting a second weekend of tournament play is also a goal unto itself, which can have all sorts of tangible (greater television exposure) and intangible benefits (playing in more tournament games is fun). The way the N.C.A.A. bracket is set up, a team is actually punished in this respect for being a No. 8 seed rather than a No. 12 seed.

You can also see this pattern, by the way, in the historical data. Since the tournament expanded to 64 teams in 1985, only nine No. 8 seeds, and just four No. 9 seeds, have reached the Round of 16. By contrast, 19 teams have reached the third round as a No. 10 seed, as have 12 No. 11 seeds. Some 18 teams have reached the Round of 16 as a No. 12 seed. All of this is despite the fact that these teams are, both in theory and in practice, generally somewhat weaker than the ones seeded in the No. 8 and No. 9 positions.

Here is what happens after the team plays its third game. The differences even out somewhat, as some of the teams that had avoided a No. 1 or No. 2 seed before will now have to face them. (One methodological note: I’ve turned the geographical adjustment off for this and all subsequent rounds, because there is no strong tendency for higher seeds to play closer to home in the regionals and beyond). 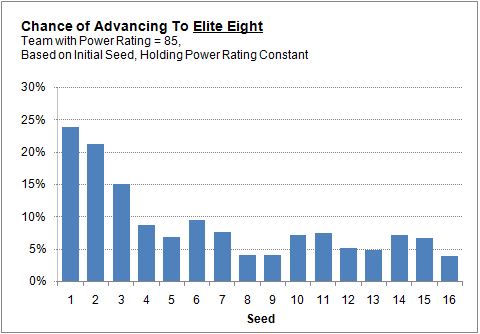 Although the differences are less profound now, we still find that the No. 8 and No. 9 seeds are at a disadvantage relative to all the teams seeded from No. 10 to No. 15. Our model also suggests that the No. 6 seed is a fortuitous position for advancing to the Round of 8. Indeed, 13 No. 6 seeds — as compared to just 7 No. 5 seeds and 6 No. 7 seeds — have done so since 1985.

A No. 8 or No. 9 seed is also at a disadvantage in reaching the Final Four: 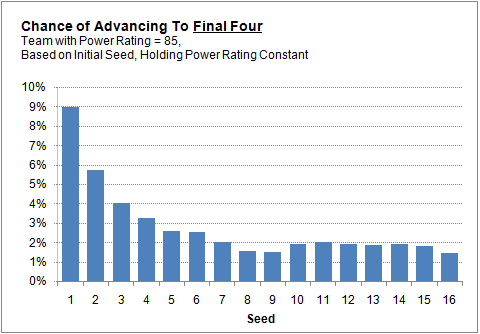 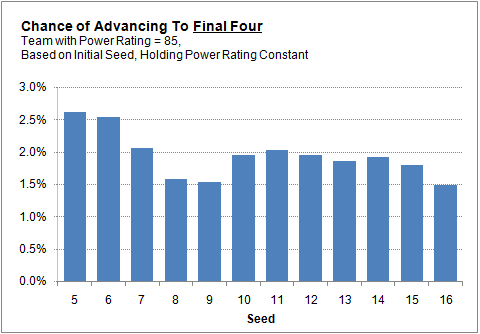 If you took a No. 8 seed tantamount in strength to Arizona and had it flip places with the No. 11 seed in another region, it would improve its chances of reaching the Final Four by almost 30 percent. Even the No. 15 seed is better — about 15 percent better — for these purposes.

I won’t show you the charts for the last two rounds, because from this point onward the initial seeds do not matter since each of the regions have been won. However, the percentages are proportional to what they were for reaching the Final Four. So Arizona would be more likely to win the national title as a No. 10 seed, a No. 11 seed, or even as a No. 15 seed, than as a No. 8 seed. 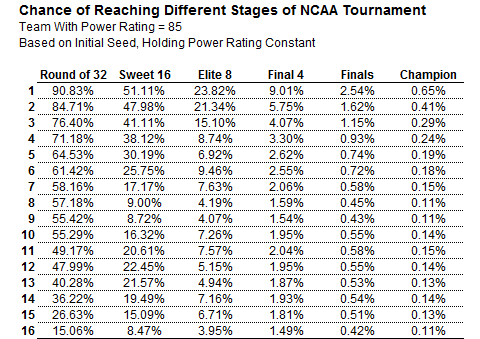 One last way to view this is through a measure that I introduced Monday: Tournament Success Points. This awards a team 1 point for winning its first-round game, an additional 2 points for winning its second-round game, and so forth, with a national title being worth 21 points (1+2+3+4+5+6) in total. 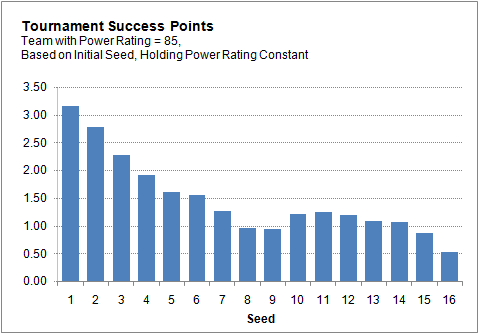 Should the N.C.A.A. be concerned about this? I think you need to be concerned any time you create an incentive for losing — which is what the current tournament structure does. For example, a team playing in a conference championship that figured to be a No. 9 seed if it won the tournament but a No. 11 seed if it lost might have some incentive to tank.

In the real world, of course, a team might not be able to calibrate things quite that precisely; a team that was counting on a No. 11 seed could find itself left out of the tournament entirely. But there are several solutions to this problem that the N.C.A.A. might consider, which I’ll list in order of least drastic to most drastic.

First, it could place a stronger emphasis on geography for teams seeded No. 8 or No. 9, making sure that they played fairly close to home for the first and second (and possibly the third and fourth) rounds. This would help to level the playing field.

Second, and related, it could move away from the ‘pod’ system that it adopted in 2002. Since 2002, teams seeded No. 1 have played an average of about 250 miles from home in their first-round game, as compared with about 500 miles away prior to 2002. Teams seeded No. 1 and No. 2 have enough advantages without giving them two virtual home games.

Third, rather than level the playing field for the No. 8 seeds, it could instead put teams seeded No. 10 and below at a disadvantage by increasing the number of play-in games. I am not a fan of the 96-team tournament proposal that nearly passed last year, but it would solve this particular problem.

Fourth, the N.C.A.A. could rearrange the order of the seeds in each region. For instance, what we now think of as the No. 8 seed would actually be occupied by the 12th best team, or vice versa. It would take some deep thinking to determine what the optimal arrangement of seeds is — but the system in place now can almost certainly be improved upon.

The fifth solution is the most radical — and, I think, the best one.

Under the current system, a team really gains a structural advantage only by being awarded one of the top six seeds in its region. After that, it is relatively indifferent toward its seed, and higher seeds are not always better than lower ones.

The proposal, then, is that the N.C.A.A. would rank only the first six seeds in each region (that is, the top 24 teams over all); the others would be slotted purely at random. This somewhat resembles the system used at tennis tournaments, for instance, where typically only 16 or 32 players are seeded, and the others are drawn by lot.

The advantages to this system are threefold. First, it would remove any incentive for a team to tank — instead, it would want to go for broke to claim one of the highly valuable top 24 seeds. Second, it might create more spontaneity in the first two rounds and make the No. 1 or No. 2 seeds at least somewhat more vulnerable to upsets. Third, it would be fun. There would be two “bubbles” — a seeded-team bubble and an in-the-field bubble — rather than one. The tournament selection show could be expanded from one hour to two, with the last half involving Vanna White and Dean Smith drawing ping-pong balls out of a tumbler.

Variations on the proposal might involve seeding only the first 16 teams rather than the first 24, which would be more symmetrical. Or rather than the unseeded teams having their places drawn by lot, they could instead be determined wholly or partially by geography, perhaps with the proviso that teams from the same conferences could not compete against one another. For example, Notre Dame, a seeded team, could be placed alongside unseeded regional rivals like Michigan State, Butler and Indiana State in the same corner of the bracket, and play some combination of them in its first two games.

As you may have noticed if your team has been a No. 8 or No. 9 seed in recent tournaments, there are fairer ways to put the field together.