The Lancet has seen its fair share of bizarre medical cases — the medical journal has, after all, been around for 191 years. But the latest diagnosis probably caught a few of its editors by surprise: WhatsAppitis.

The 34-year-old patient, herself an emergency-medicine physician, sustained the injury after using WhatsApp, an instant-messaging service for smartphones. On Dec. 25, “she made continuous movements with both thumbs to send messages” for more than six hours. The wrist pain she suffered meant that she stopped using WhatsApp … until an “exchange of new messages on Dec. 31.”

The clinician who made the diagnosis added a caution in the publication that the case could be part of an emerging trend. So we thought it would be useful to summarize previous tech-induced injuries and see whether we could find any relevant data on emergency-room admissions.

1990: Nintendinitis was first diagnosed with surprising parallels to the case described above. The clinician recounts how “a 35-year-old woman visited my home during the Christmas holidays, at which time my sons received a Nintendo video game. The woman, who had not previously engaged in this recreational activity, pursued it with enthusiasm, playing without interruption for five hours. The following day, she had severe pain in the region of the extensor tendon of the right thumb, which had been used to press a button repeatedly.”

1991: Nintendo Neck was diagnosed by a doctor after he noticed his son had a neck ache from using his GameBoy. He describes how “the pain must have been intense, for he actually chose to walk away from the game and chose to play Barbie with his sister, whom he tolerates at best.”

1991: Nintendo Pants Wetting, or “enuresis” to use its proper medical term, was noted in the Pediatrics journal. Although, “the problem was resolved after 1 to 2 weeks when the children learned to use the pause button.”

2004: Playstation Thumb was reported in the Lancet by an individual who found a “blister made by the friction of my left thumb and the PS2 game controller.”

2009: Wiiitis has had various forms observed, including a type of Wii-tennis elbow; Wii-knee “in which a 16-year-old boy avulsed several knee ligaments during a particularly energetic session with the console”; and more generic cases, such as “an inebriated man who accidentally punched his wife in the face as he attempted to battle a dungeon ‘boss’ in ‘Zelda: Twilight Princess.’ ”

Beyond these instances, we couldn’t find a dataset on technological or gaming injuries (let us know if you can point us toward one). But we can get a little closer to understanding the risks associated with different products. The Consumer Product Safety Commission has been keeping a database of specific emergency visits. Its National Electronic Injury Surveillance System was last updated in 2012 and shows which products injure whom. Unfortunately, there’s no mention of Wiis, let alone WhatsApp, but we’ve summarized some of the biggest categories below. 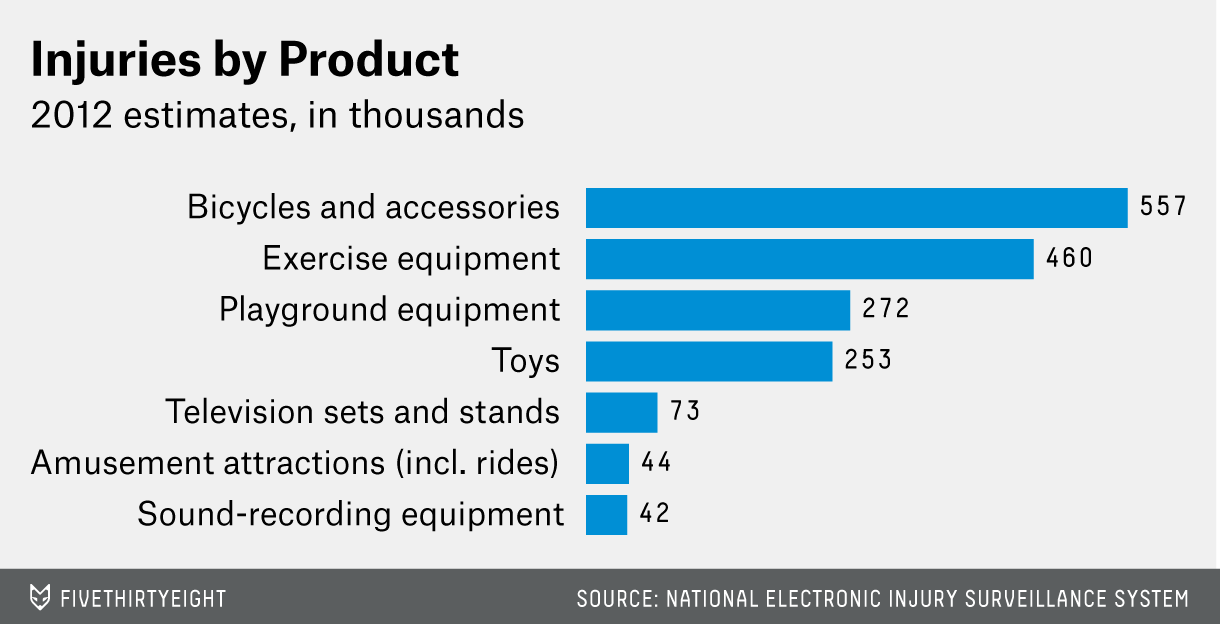 One other set of numbers might be helpful to understand tech-related injuries. Ohio State University last year claimed to have spotted the rise of “distracted walking.” It estimated that in 2010, more than 1,500 pedestrians were treated in emergency rooms for injuries related to using a cellphone while walking. And despite the fact that since 2005 overall pedestrian injuries have fallen, the number of distracted walkers going to the ER has doubled.