Something is awry at the Rand Paul campaign. The main super PAC supporting his presidential bid raised just $3.1 million in the first half of 2015, about $100 million less than Right to Rise, a super PAC backing Jeb Bush. In fact, the pro-Paul group’s fundraising total was lower than that of every other major super PAC that is backing a Republican candidate and has announced its totals. On Sunday, a new NBC News/Marist poll showed support for the Kentucky Republican declining to just 4 percent in New Hampshire (compared with 14 percent in February). Numbers like these have people asking, “Has Rand Paul stalled?”

It’s very early. The Iowa caucuses are still six months away, and there’s plenty of time for the Republican nomination race to shift — and shift again. Just look at former U.S. Rep. Ron Paul, Rand Paul’s father, who was polling at only around 8 percent in Iowa at a comparable point in the 2012 primary contest. Ron Paul went on to earn just over 21 percent of the vote in the Hawkeye State.

Still, Rand Paul is at his lowest point in the national polls in over two years. 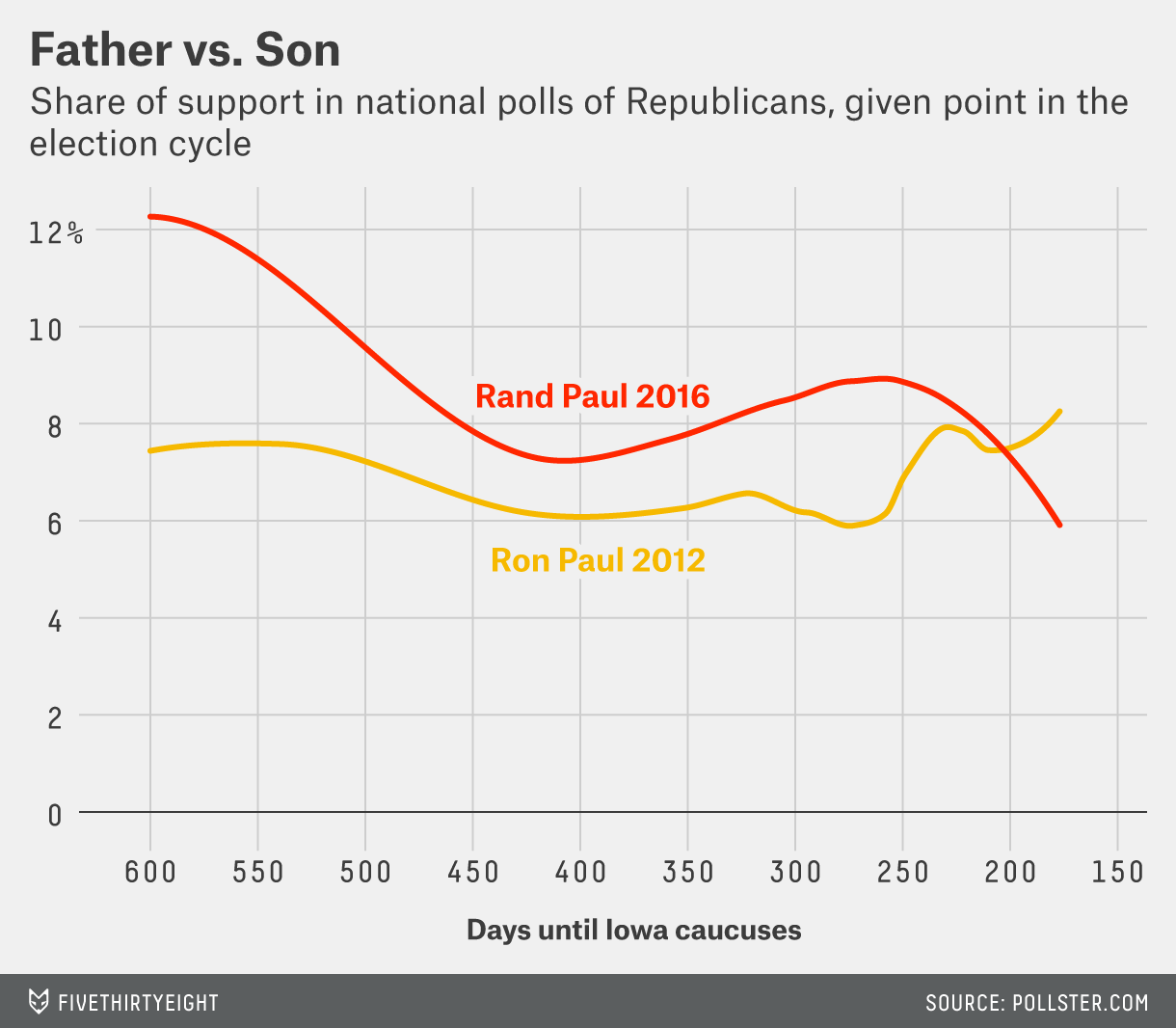 Paul saw a brief boost around the time he officially announced he was running for president. But the upswing was fleeting, and he has now fallen behind the pace his father set in the 2012 campaign. Ron Paul steadily rose in national polls as the campaign unfolded. Rand, on the other hand, is steadily falling. In addition to his plummeting support in the early primary state of New Hampshire, Paul has seen his numbers deteriorate in Iowa: The NBC News/Marist polls that came out Sunday put Paul at his lowest point thus far in either state.

It would be a mistake to put too much emphasis on Paul’s meager standing in horse race polls. Again, it’s super early, and the Republican field is crowded and confused; as more and more candidates enter the race — there are now 16 — it becomes more difficult for candidates to maintain their support. Donald Trump is busy sucking up all the media’s attention, and there’s a decent argument to be made that Trump is appealing to Paul’s voters.

The more worrying problem for Paul is his favorability numbers: They’re also dropping. Different pollsters ask about favorability in different ways, but YouGov has checked the popularity of almost every Republican candidate every single week since the beginning of the year. So we can easily compare from poll to poll. Over the first five weeks of 2015, Paul’s favorable rating averaged 62 percent among Republicans. Just 14 percent had an unfavorable view of him. Over the five most recent weeks, though, Paul’s favorable rating has averaged 52 percent, with an unfavorable rating of 27 percent. His net favorability rating (favorable minus unfavorable) has dropped by nearly half, from +48 percentage points to +25 percentage points.

Paul’s lost his footing not only because he’s disappeared from the media coverage but also because GOP voters like him less. Both are fixable problems. But solving the first — finding favor with the press — won’t be enough. Paul has to find favor with Republican voters, too.