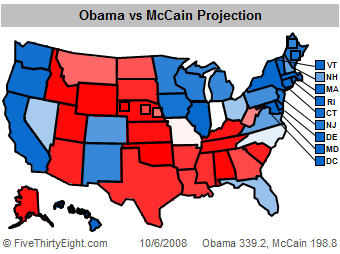 We’re now going to break out the projected result in Maine and Nebraska’s congressional districts explicitly for you, as both states award one vote to the winner of each CD.

The simulation has always been doing this behind the scenes, but given the extra attention these states have gotten from the campaigns, we have made the procedure more robust. Specifically, we are now using our regression analysis to allocate the vote within each state according to our standard litany of demographic variables and political metrics. (Before, we had simply been using the 2004 vote). I do NOT intend to use polls from these districts, mostly because there aren’t very many of them, and where we have them they are subject to very small sample sizes (a 600-person poll of Nebraska means only about 200 voters in each CD). 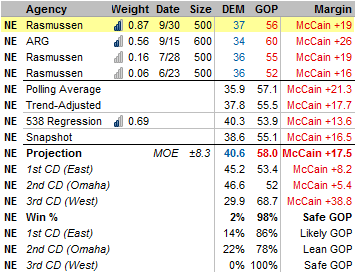 NE-2, which essentially overlaps the city of Omaha, is Obama’s best opportunity to pick up an electoral vote in Nebraska. Our model estimates that it will run about 12 points more favorable for Obama than the state as a whole. Right now, Nebraska probably isn’t quite tight enough for it to matter, although there may be a fudge factor if Obama has a turnout operation there and McCain doesn’t. Nebraska’s 1st Congressional District, covering the college town of Lincoln and the Eastern portion of the state, is also theoretically winnable for Obama. He’ll get crushed, meanwhile, in Western Nebraska. If John McCain has a nervous breakdown and replaces himself on the ticket with Jack Abramoff, Obama might win 537 electoral votes — with Western Nebraska being the holdout. 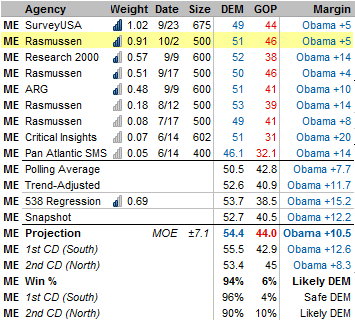 There’s not as big a discrepancy here. ME-2, which stretches from Bangor into Maine’s northwoods, is the inferior district for Obama, but probably shouldn’t run more than about 2-3 points behind his statewide totals. Obama dominated McCain in fundraising in both ME-1 and ME-2, and while ME-2 does present some demographic challenges for him — there are some of Ed Muskie’s “Cannocks” up that way — it also has a higher percentage of young voters than ME-1, which should help Obama somewhat.

Lastly, some bad news … the polling thread won’t be ready until LATE tonight.