Last Tuesday, Wisconsinites went to the polls despite the raging coronavirus pandemic, but thanks to a court ruling that extended the deadline for absentee ballots,1 we didn’t get any results until Monday evening.

In what will go down as the final contested Democratic presidential primary of 2020, former Vice President Joe Biden defeated Sen. Bernie Sanders 64 percent to 31 percent. But since the result was expected (and Sanders dropped out of the race the day after the election anyway), who won is actually less interesting than who voted and how.

As of 10 p.m. Eastern on Monday, 1.37 million votes have been cast so far in Wisconsin’s Democratic and Republican presidential primaries combined, which would be about 31 percent of the voting eligible population. That number will likely increase a bit, but not nearly enough to match Wisconsin’s 49 percent turnout rate in the 2016 presidential primary. But it would be a mistake to attribute the drop entirely to the coronavirus; some of it was probably because the election simply had lower stakes. In 2016, both parties hosted competitive presidential primaries in Wisconsin; this year, President Trump already had the GOP nomination sewn up, and the Democratic primary was competitive in name only, as Biden had already become the prohibitive favorite.

On the other hand, the coronavirus almost certainly contributed to the record number of people who voted absentee. As of Monday morning, 1,098,489 absentee ballots had been returned, meaning absentees will probably account for about 80 percent of all votes in this election.2 That’s an unheard-of proportion in Wisconsin, where voting by mail is not very widespread. For example, only 10 percent of Wisconsinites voted absentee in the 2016 presidential primary, and only 27 percent in the 2016 general election.

The numbers below are preliminary, but what’s clear is that turnout did not drop uniformly across the state. Although no county matched its 2016 turnout (so far),3 three of the ones that came closest were the so-called “WOW” counties — Waukesha, Ozaukee and Washington — in the well-to-do Milwaukee suburbs. 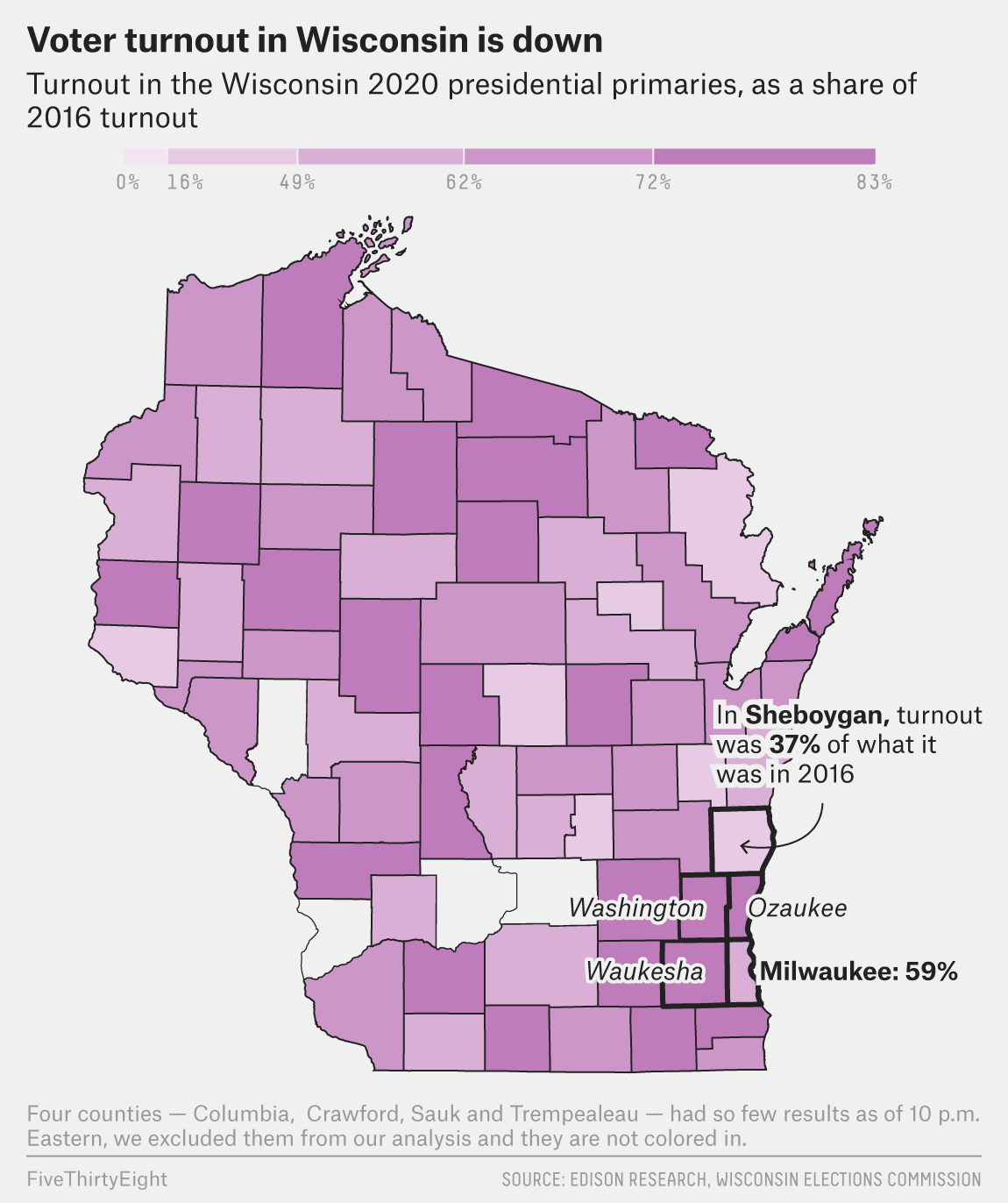 On the other end of the spectrum, the number of votes cast in the presidential primaries was 40 percent of 2016 turnout or less in Calumet, Green Lake and Sheboygan counties, three counties in east-central Wisconsin. Turnout was also relatively low (59 percent of 2016 levels) in Milwaukee County; the City of Milwaukee (which makes up most, but not all, of the county) experienced extremely long lines after a shortage of poll workers forced it to consolidate 180 polling places into five.

Just because the presidential race was a snoozer, however, doesn’t mean there wasn’t anything interesting in the actual results. The election for state Supreme Court turned out to be a barnburner: Liberal challenger Jill Karofsky defeated conservative incumbent Daniel Kelly 54 percent to 46 percent, cutting the conservative majority on the bench to 4-3. The result means it could take only a single justice to sway the outcome of several important cases that may come before the court in the next few years, such as whether the state must purge up to 209,000 voters from its rolls or what Wisconsin’s congressional map will look like for the next decade.

But these results may not be the last word on the election, which could face legal challenges due to cries of disenfranchisement. There have been numerous reports of voters not receiving their absentee ballots in time to cast them, and hundreds of ballots have been found never to have been delivered at all; the U.S. Postal Service is currently investigating what happened. Not to mention, some absentee ballots that were mailed back on time may not be allowed to count. The U.S. Supreme Court ruled that absentee ballots must be postmarked by April 7 in order to count, but there are already reports of several hundred ballots not postmarked, which means they might not count.

In a meeting on Friday, members of the Wisconsin Elections Commission deadlocked on whether to count postmark-less ballots that arrived after April 7, even if it was likely they were mailed on or before election day. Election officials in Milwaukee said on Monday they would count at least 390 ballots without postmarks — potentially inviting a court fight. And on Monday, a group of Milwaukee-area residents filed the first federal lawsuit seeking a new election in Wisconsin. There may be even more lawsuits coming. Wisconsin Democratic Party Chair Ben Wikler said on Monday, “Every legal option is on the table.”

The only thing that’s clear at this point is that the Wisconsin election will continue to be litigated for at least a while longer. Given the disorder and uncertainty that has surrounded the Wisconsin election at every turn, it stands as a cautionary tale for other states conducting upcoming elections in this environment.