Whether he’s dancing the Cupid Shuffle or wearing a button pledging to “Make Americans Think Harder,” tech entrepreneur Andrew Yang has run anything but a normal presidential campaign. That seems fitting for a political novice whose background in law and technology has given his campaign an unusual top issue: a signature proposal for a universal basic income — Yang calls it the “Freedom Dividend” — to mitigate the effects of automation and job loss on the economy. At one debate, Yang even announced that his campaign would give 10 families $1,000 per month for the next year as a case study for his UBI proposal.

And although Yang’s support continues to hover in the single digits — about 3 percent nationally, on average — he is one of seven candidates who made the December debate, and he is also the only candidate of color to make the cut. So here’s a look at what we know about Yang’s small, but loyal support — the “Yang Gang” — and what it can tell us about his presidential bid.

Yang’s base is young

Yang’s strength comes primarily from voters under the age of 45, especially those between the ages of 18-to-29. Take Morning Consult’s large-sample weekly tracking poll where they interviewed more than 13,000 likely Democratic primary voters nationwide from Dec. 9 to Dec. 15. In that survey, Yang received 9 percent support among 18-to-29 year olds, which put him fourth behind Sen. Bernie Sanders (44 percent), former Vice President Joe Biden (18 percent) and Sen. Elizabeth Warren (12 percent). So even though Yang had far less overall support in the poll than Sanders (4 percent versus 22 percent), Yang actually had the largest share of supporters under the age of 45 (74 percent compared with Sanders’s 69 percent).

Additionally, Yang enjoys less overall support among the older half of the 18-to-44 range, with the backing of about 5 percent of 30-to-44 year olds, putting him fifth behind Sanders, Biden, Warren, and South Bend, Indiana, Mayor Pete Buttigieg.

As for why Yang has an outsized appeal among younger voters given his overall standing, he has without question run an internet-savvy campaign, leaning into the meme culture popular among his supporters online. He’s also appeared on well-known podcasts, answered questions from users on Reddit and Quora and promised to give one Twitter user $1,000 per month just for retweeting him, which attracted over 100,000 retweets. But Yang also hasn’t shied away from discussing the dark underbelly of technology. That’s an issue that resonates with many young people, who have grown up in an era where tech giants like Amazon, Facebook and Google have dominated the marketplace and are helping alter the future of work. Yang thinks a UBI is necessary to counteract this sort of economic disruption, especially as things continue to change in the coming years.

Yang, who has been called a “doomer” because of his outlook, believes President Trump won in 2016 because people were worried about losing their jobs in a fast-changing world. And as young people are most familiar with the ins and outs of new technology, it’s understandable why a candidate who is heavily engaged with technology’s benefits and pitfalls may be so attractive to younger voters.

Yang’s base is also very male

In addition to Yang’s support trending young, it is also very male. For instance, in that Morning Consult survey, Yang earned 11 percent among 18-to-29 year-old men versus just 6 percent among women in that same age group. And according to The Economist’s polling with YouGov, his support among men in this age group is about 10 percent, while his support among women is in the low-to-mid single digits. Interestingly, differences between men and women largely disappear among older age groups. 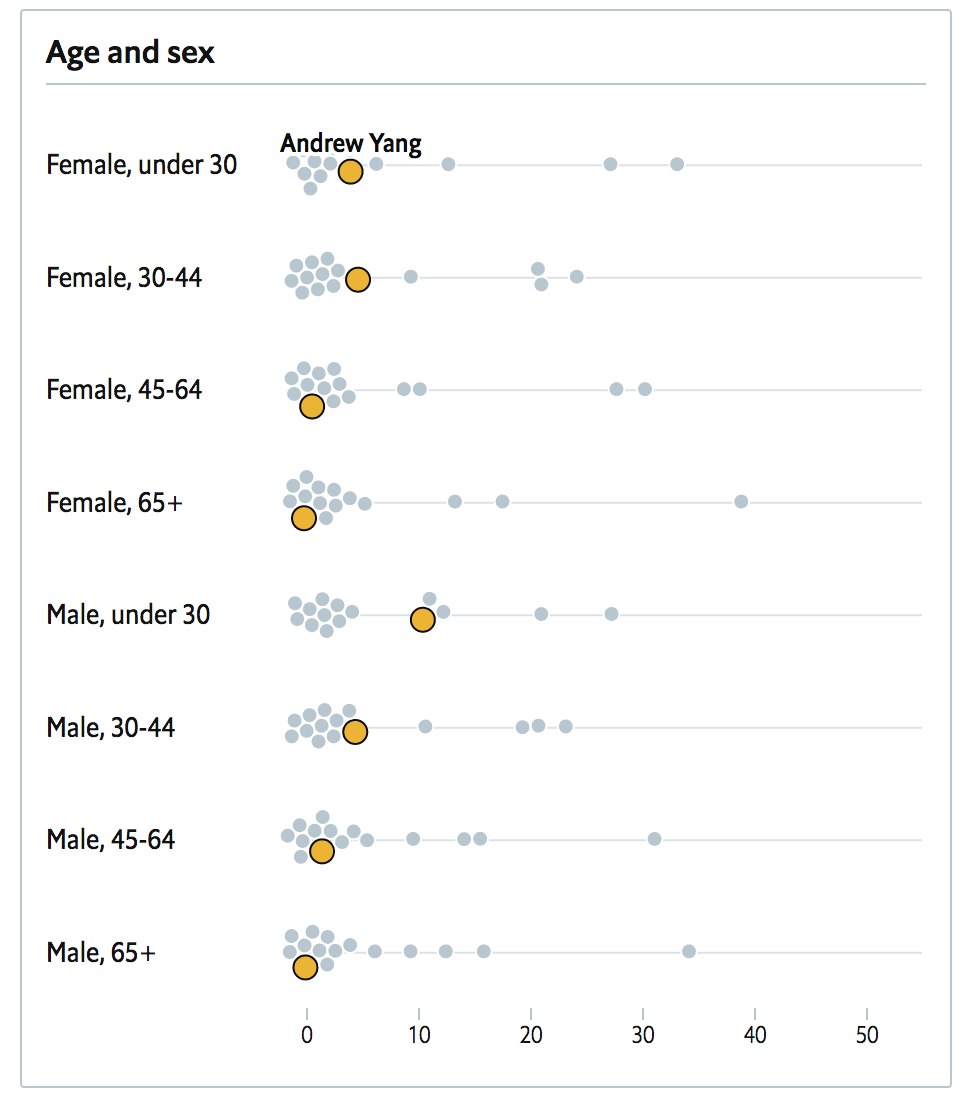 There’s also evidence of Yang’s appeal to younger male voters aside from the polls, however. For example, an analysis by the Center for Responsive Politics in November found that women were less likely than men to contribute to his campaign — only 29 percent of Yang’s itemized contributions have come from female donors so far.1 (Only Rep. Tulsi Gabbard has raised less among women donors — 24 percent.) Another sign is Yang’s share price in betting markets, whose participants are predominantly young men. As of publication, PredictIt prices Yang’s shares around 8 cents for winning the Democratic nomination — analogous to a slightly less than 10 percent chance — despite polling at around 3 percent nationally.

Asian Americans are also a very important part of Yang’s base. While Asian Americans will make up only around 5 percent of the primary electorate, Morning Consult found Yang at 19 percent among them, behind only Biden (24 percent) and Sanders (22 percent). And Yang’s support among Asian Americans has consistently outdistanced his overall numbers. Back in September, for instance, Yang polled at 8 percent in a survey from AAPI Victory Fund/Change Research of just Asian American and Pacific Islander primary voters even though he was polling at about 2 percent nationally.

Part of this may be because so few Asian Americans have run for president. There were Asian American Hawaiians like Republican Sen. Hiram Fong, who got a handful of votes at the 1964 and 1968 GOP conventions, and Democratic Rep. Patsy Mink, who won a small number of votes in the 1972 primary, but their bids were a long time ago. Granted, former Louisiana Gov. Bobby Jindal, who is Indian American, ran for the Republican presidential nomination last cycle, but he struggled to attract more than 1 percent in the polls and suspended his campaign in November 2015, well before any votes were cast. So in the 2020 primary, Yang, along with Sen. Kamala Harris (who is part Indian American but has since dropped out), have perhaps given Asian American voters at long last someone from their constituency to back, which can help explain why so many have rallied to Yang’s side.

Yang is also an outsider candidate

As a fellow outsider candidate, Yang’s appeal also shares some traits with Gabbard’s in that Yang also broke through in part via nontraditional venues, including outlets that are considered part of the Intellectual Dark Web, a politically amorphous network that generally criticizes concepts such as political correctness and identity politics. Like Gabbard, Yang also hasn’t shied away from going on conservative talk shows, doing interviews with Fox News personality Tucker Carlson and conservative commentator Ben Shapiro, whereas some Democrats have refused to appear on Fox News. Yang’s donor count also exploded after appearing on The Joe Rogan Experience, one of the most popular podcasts in the country, which also helped Gabbard’s campaign.

Still, for being an outsider candidate, Yang doesn’t get as much support from Trump supporters or conservatives as Gabbard does. In last week’s poll from The Economist/YouGov, for instance, 25 percent of Trump voters who said they plan to vote in the 2020 Democratic primary said they intended to support Gabbard, versus just 2 percent who said they would support Yang. Similarly, in that Morning Consult poll, Gabbard received 5 percent among very conservative and conservative primary voters (and very little support among more liberal voters), whereas Yang’s support was more ideologically balanced, ranging anywhere from 2 to 4 percent across all five ideological groups.2

Nor does Yang get as much disproportionately liberal support as another outsider in the race: Sanders. That’s despite notable overlap between Sanders’s supporters and Yang’s supporters, according to Morning Consult’s second choice voter data. That Morning Consult survey found that 8 percent of Sanders’s supporters picked Yang as their second choice, while a whopping 33 percent of Yang’s backers said Sanders was their backup option. Yet in that same poll Sanders got the most support from very liberal and liberal voters (29 percent and 22 percent, respectively) and less from moderate and conservative voters as a whole, so his support was more weighted toward more liberal voters than Yang’s.

With only seven candidates making the cut for December’s debate, it’s fair to say that Yang’s outsider candidacy has broken through in the Democratic primary — in large part thanks to enthusiasm for him among younger voters and Asian Americans.

The question now is whether he can expand his appeal beyond 3 or 4 percent nationally. Raising nearly $10 million in the third quarter certainly helps his case — that’s real money he can use to build an on-the-ground campaign structure in early states like Iowa and New Hampshire. And with an army of small donors, Yang may have a reliable source of money to broaden his reach. Still, the crowded group of four candidates at the top of the polls will make it tough for him to actually win the nomination.

Nonetheless, Yang’s continued presence in the primary — when other candidates with more traditional resumes have already dropped out — speaks volumes to his appeal. Perhaps Thursday night will be an opportunity for him to gain real momentum. After all, despite speaking the fewest words in the last debate, Yang’s net favorability improved the most of any candidate on stage in our polling with Ipsos. Maybe don’t write Yang off just yet, even if a lot would have to go right for him to break into the top four.