Once in a blue moon, you see a poll that makes you blink twice to make sure you’re not seeing things. This morning’s ABC News/The Washington Post survey of Wisconsin was just such a poll. It showed Joe Biden 17 points (not a typo) ahead of President Trump, 57 percent to 40 percent, among likely voters. To put it mildly, this is a stunning margin in what is supposed to be one of the most competitive swing states in the country — a place that Trump carried by less than 1 percentage point in 2016.

And this is not an easy poll to disregard. ABC News/Washington Post adheres to what we consider the gold-standard methodology (meaning they use live phone interviewers, call cell phones as well as landlines and participate in the American Association for Public Opinion Research’s Transparency Initiative or the Roper Center for Public Opinion Research archive) and earns an A+ grade in FiveThirtyEight’s pollster ratings database.1 The poll single-handedly increased Biden’s lead in our polling average of Wisconsin from 7.1 points to 9.0 points, and it is currently the most influential poll in our forecast of Wisconsin, where Biden’s chances of winning the state have reached a new high as a result — 93 in 100. 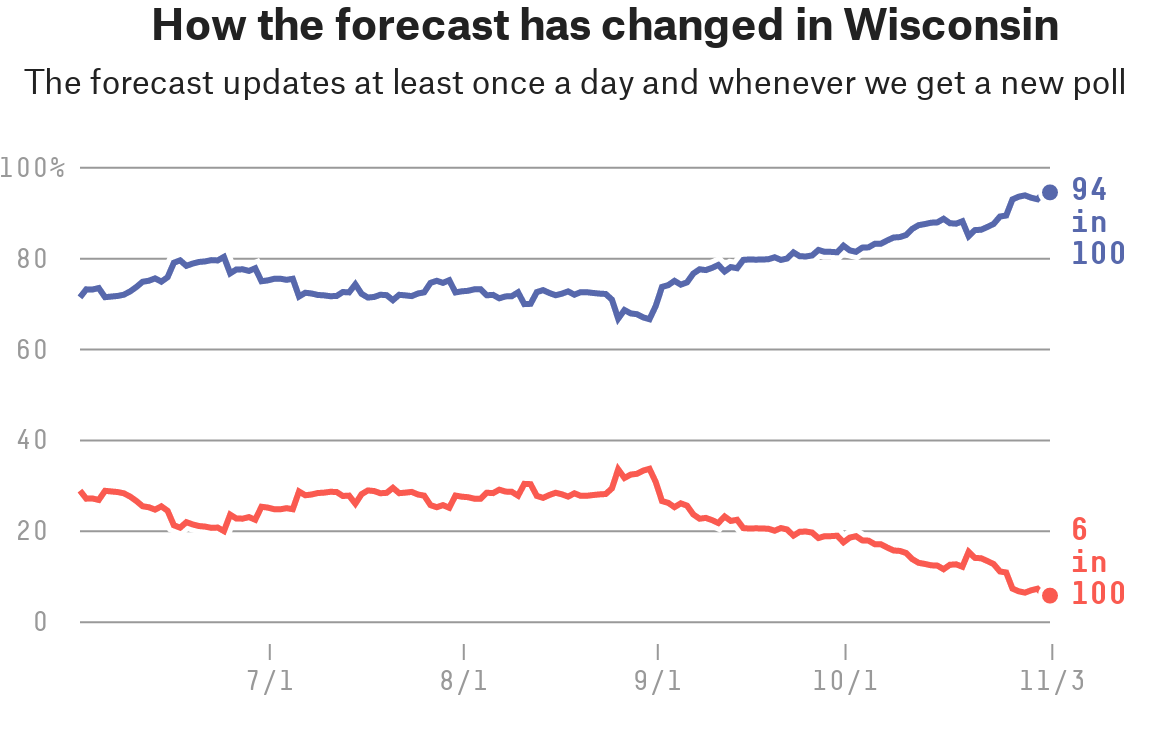 That said, ABC News/Washington Post is definitely an outlier; no other poll has shown Biden with that large a lead in Wisconsin since June. (Then, it was a Hodas & Associates poll sponsored by the conservative Restoration PAC that put Biden 17 points ahead.)

On the other hand, this poll doesn’t exactly exist in a vacuum. Biden has recently gotten a lot of very strong polls from some of the states that border Wisconsin. To wit:

What might be going on here? Well, Biden has led in some of these states for a while, but it’s also possible that Trump could be losing support in the Midwest due to the recent spike in COVID-19 cases there. Much of Wisconsin is currently a hot spot; on Tuesday, the state reported more new cases (5,262) and deaths (64) than any other day of the pandemic. The same day, Iowa and Minnesota announced a record number of hospitalizations, and cases are on the rise in Michigan as well.

Nationally, the coronavirus is a losing issue for Trump — 58 percent of Americans disapprove of his handling of the pandemic, on average, compared with just 40 percent who approve — and Wisconsin is no different. According to ABC News/Washington Post, Trump’s net disapproval rating on his handling of the coronavirus in Wisconsin is -20 percentage points — double what it was in mid-September. And 63 percent of registered voters there say they are worried about catching COVID-19. What’s more, Biden leads by a whopping 75 percent to 22 percent among members of this bloc who say they are likely to vote.

As recently as Saturday, Trump said at a rally in the Milwaukee suburbs that the pandemic was winding down. But that’s clearly not the case in Wisconsin, or in these other Midwestern states that Trump probably needs in order to win reelection. (There’s almost a 20 percent chance that one of Wisconsin, Michigan or Minnesota will provide the decisive electoral vote, and Trump has a less than 1 in 100 chance of winning if he fails to carry Iowa.) The surge of illness in the region is obviously bad news, first and foremost, for the impact it has on people’s lives. But for an incumbent president widely seen as having failed on the issue of the pandemic and facing reelection in less than one week, it’s also terrible timing politically.