Michael Phelps, the most decorated Olympian in history, announced this week that he was returning to competitive swimming. Phelps had retired following a six-medal performance at the 2012 Summer Olympics in London. Phelps and his coach, Bob Bowman, aren’t saying whether he’s gearing up for another run at the Olympics, but it’s hard not to speculate about one of the best athletes ever returning to competition. (Remember the hype surrounding a 38-year-old Michael Jordan’s return to basketball?)

I’m not here to speculate about whether Phelps will make it to Rio de Janeiro in 2016. But if he represents the United States for a fifth time — he would be 31 — how might he perform?

Putting aside conditioning concerns — Phelps only swam occasionally in the year following his retirement, though he is reportedly now working out with Bowman five days a week — the specter of age looms large. Thirty-one is ancient for an Olympic swimmer. Since 1968, only 17 athletes 31 and older have participated in any of the individual events Phelps would probably attempt (100- and 200-meter butterfly; 200-meter freestyle; and 200- and 400-meter individual medley). The average age of medalists in those events was 21.4.

Of course, Phelps isn’t the typical Olympic swimmer. At his peak, the 2008 Games, he set the world record in four of the five individual events (he had to settle for just an Olympic record in the 100-meter butterfly; he broke the world record in that event in 2009). So, in 2016, Phelps might be a shadow of his former self, but even a diminished version of history’s best swimmer could be a force to be reckoned with.

In the 2012 Olympics, Phelps took individual gold medals in the 100-meter butterfly and the 200-meter medley, and also grabbed silver in the 200-meter butterfly. If we look at how swimmers in those events tend to age, perhaps we can get an idea of whether Phelps is likely to be competitive if he takes to the water in 2016. Unfortunately, the data is sparse on competitors in their 30s, but here’s how the average male swimmer who participated in back-to-back Games tends to see his times change from one Olympics to the next (since 1968, with a minimum sample of four swimmers in each age group): 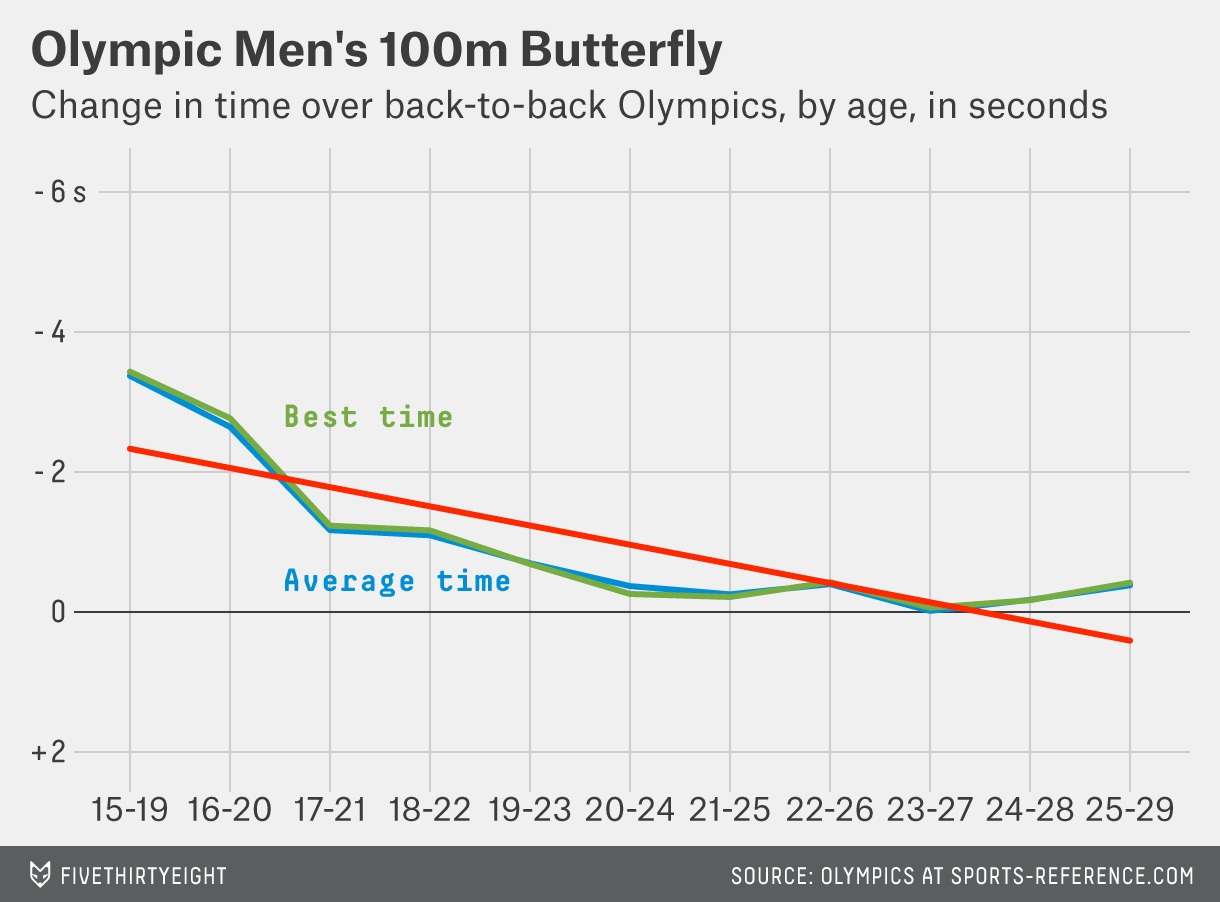 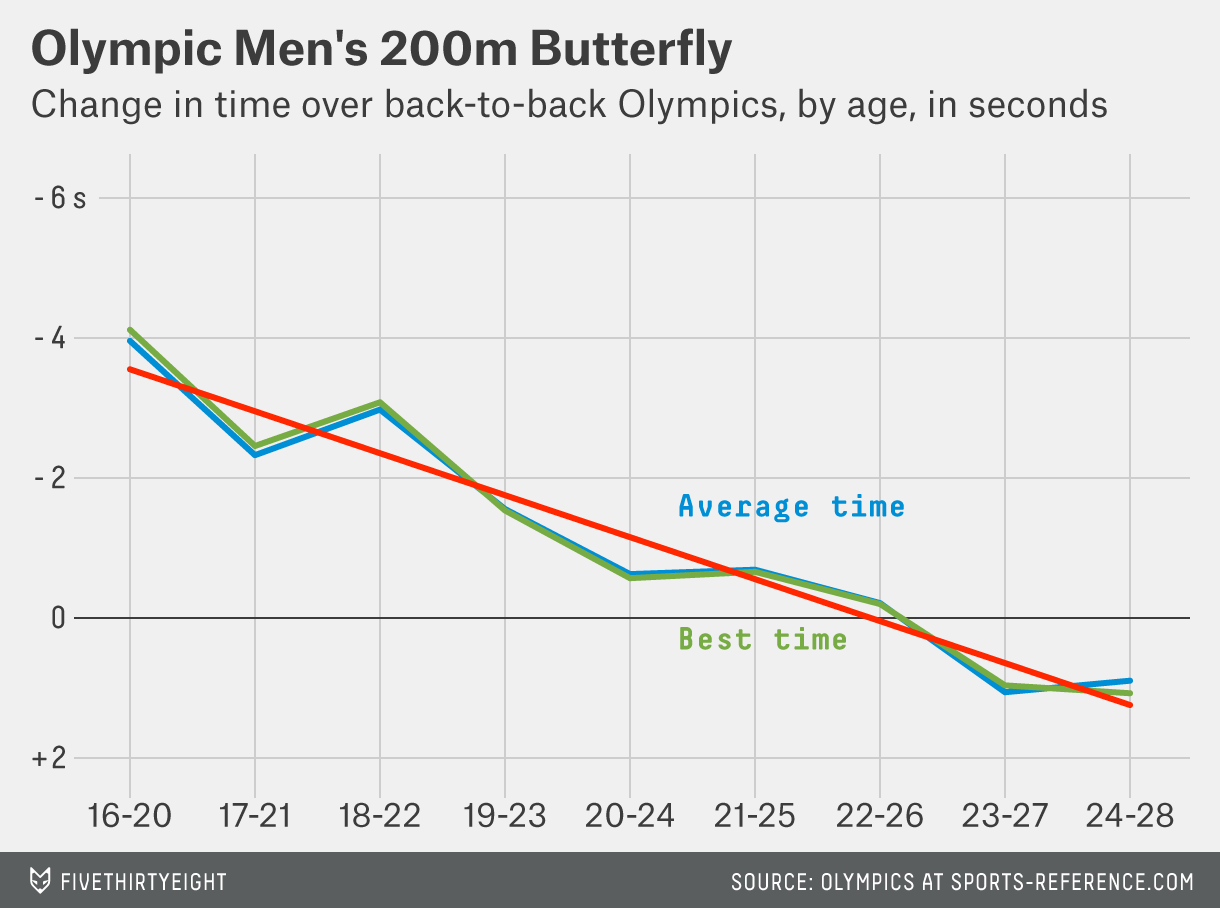 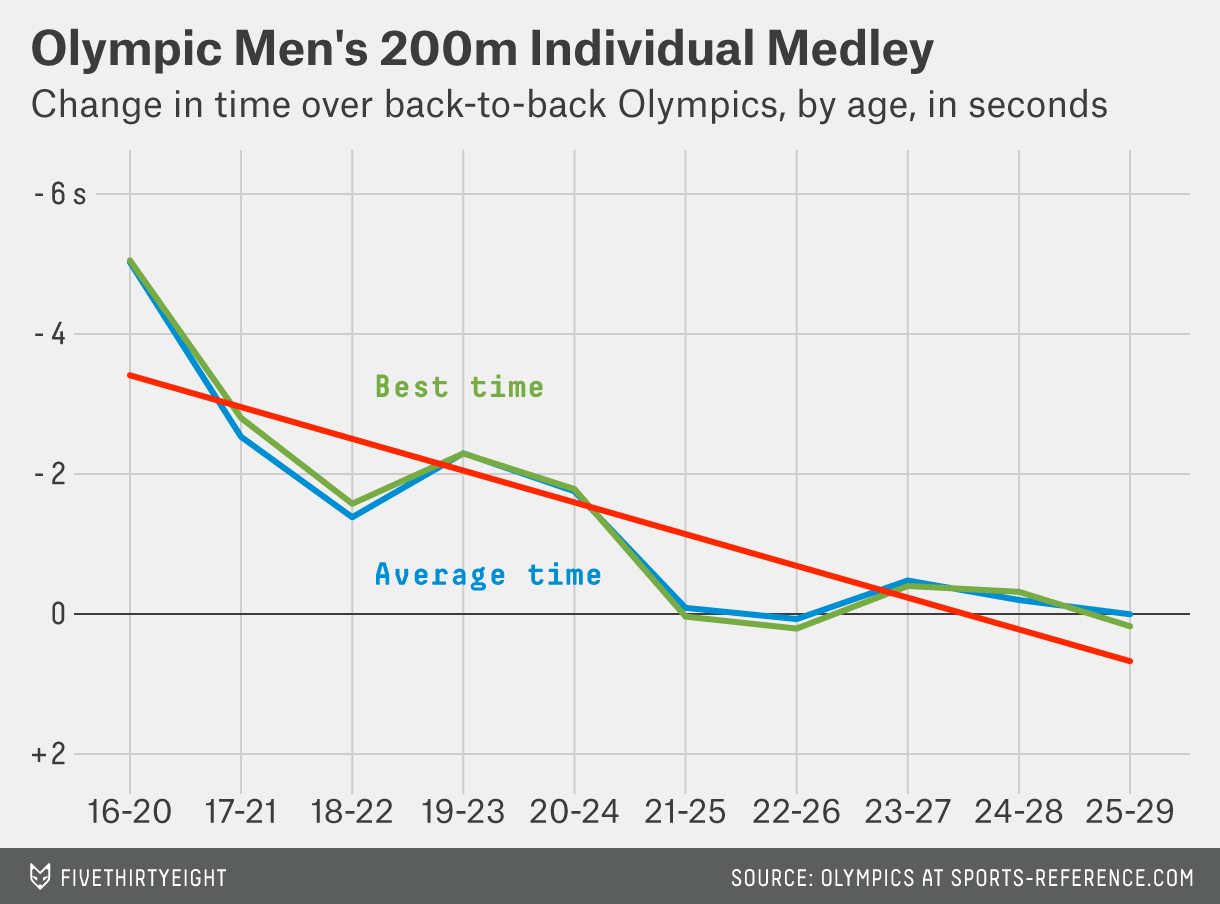 In each graph, the trend is unsurprising: Swimmers get progressively worse with age. If Phelps follows the same paths, he could expect to post average times of 52.2 seconds in the 100-meter butterfly (which wouldn’t have gotten him out of the semifinals in London), 1:57.4 in the 200-meter butterfly (which would have missed qualifying out of Round 1 in 2012), and 1:58.1 in the 200-meter individual medley (which would have qualified for the final, but not earned a medal, in London). Obviously, there’s plenty of uncertainty around those extrapolations, but they give us a sense of how age may affect Phelps — even if he’s prepared and in shape for Rio.

There’s one other factor working against Phelps: The rest of the field is getting faster. The average time for a finalist and a gold medalist has steadily decreased in each of Phelps’s best events since 1968: 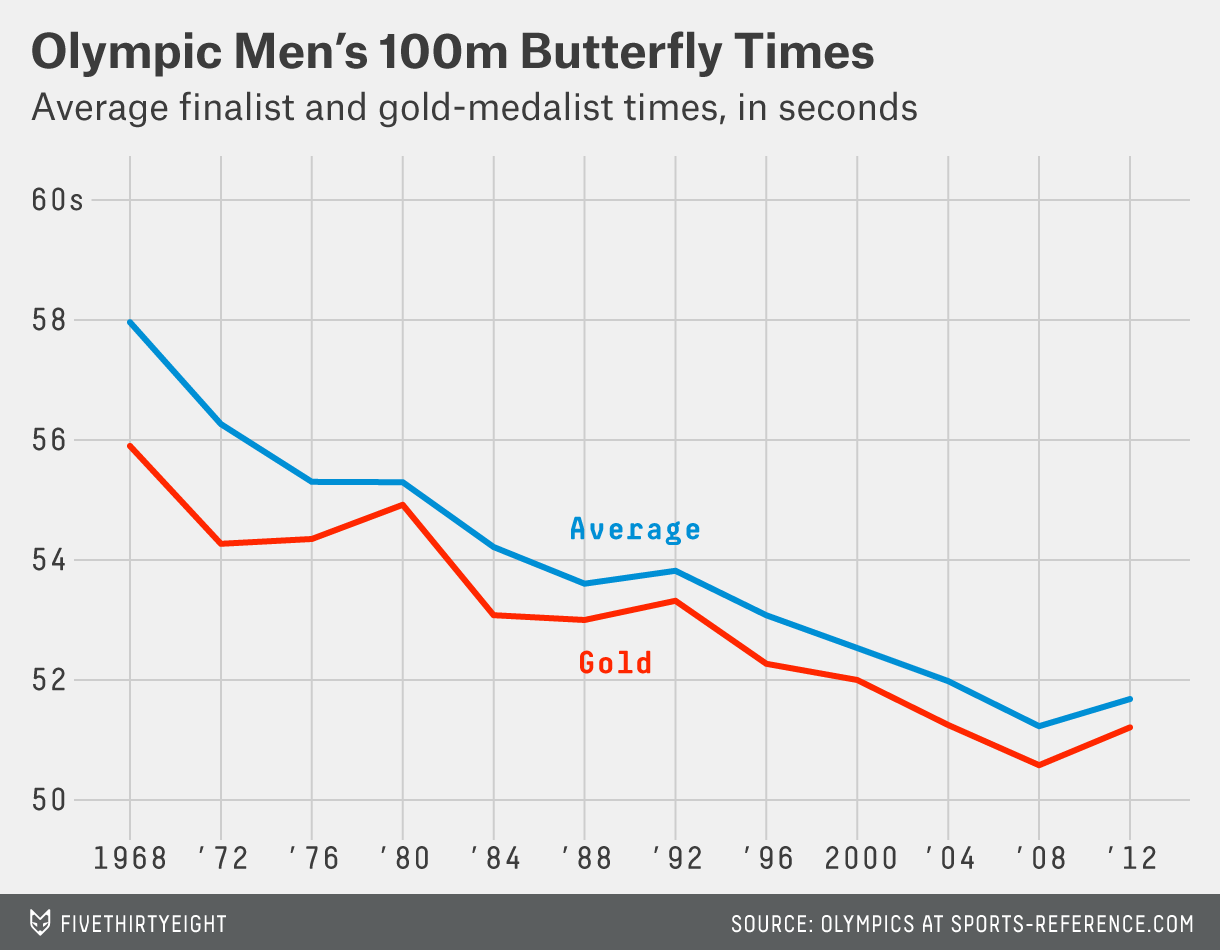 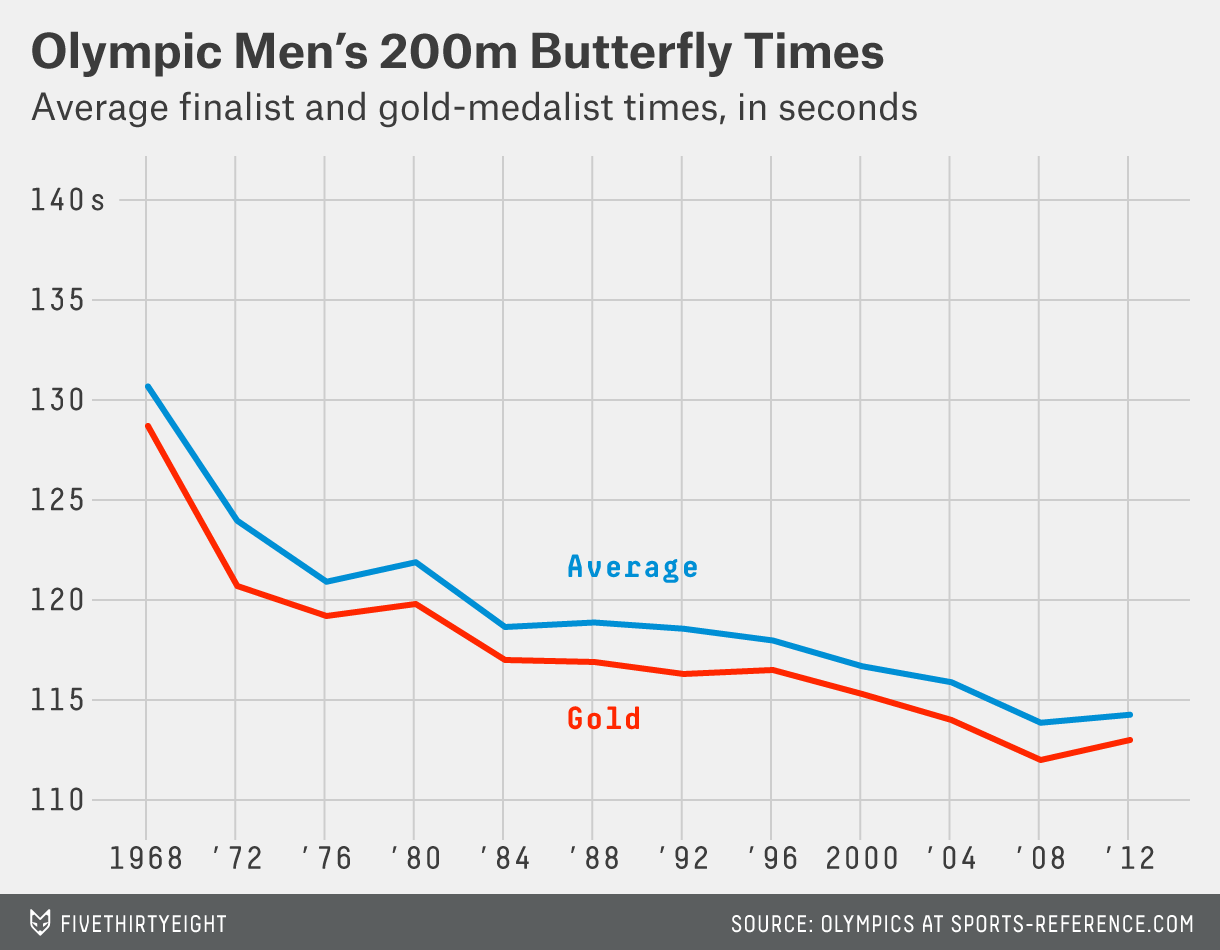 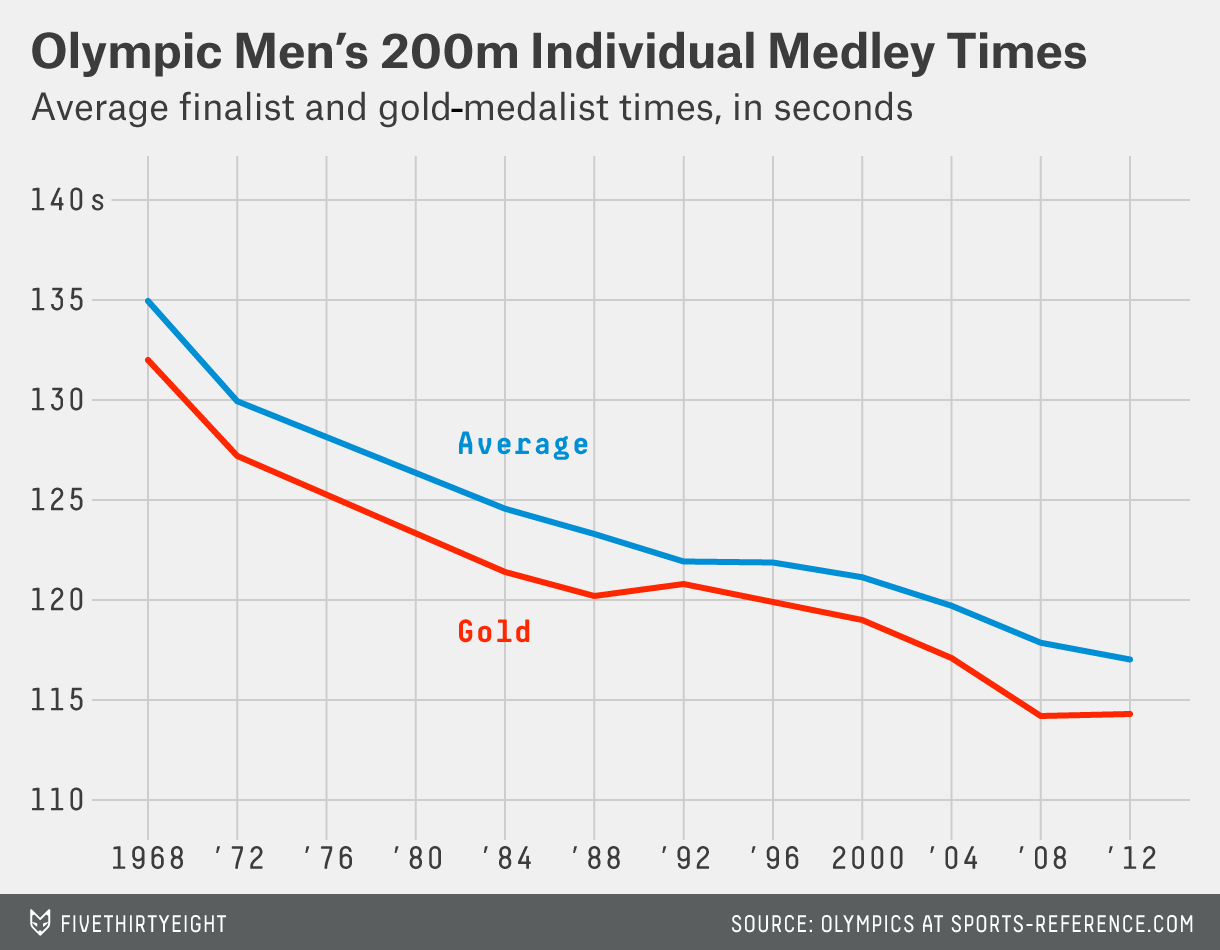 None of this isn’t to say that Phelps can’t surprise his doubters in 2016. But the age and steady progress of other swimmers will be working against him should he compete in Rio.