Higher minimum wages, legalized marijuana and abortion access were some of the focal points of our live blog coverage of the midterm elections Tuesday night, but there was one initiative we didn’t discuss: California’s Proposition 47, also known as the Safe Neighborhoods and Schools Act.

The proposition, which passed, will reclassify drug and theft crimes that involve less than $950 from felonies to misdemeanors. Our chief economics writer, Ben Casselman, wrote this week about how the law’s passage would affect the job market, but a more basic question should also be addressed: Will it work as its proponents think it will?

The California Legislative Analyst’s Office put together a report in July estimating the impact the proposition would have on the state’s prison population and incarceration costs, which the Center on Juvenile and Criminal Justice then expounded upon with additional data in September. 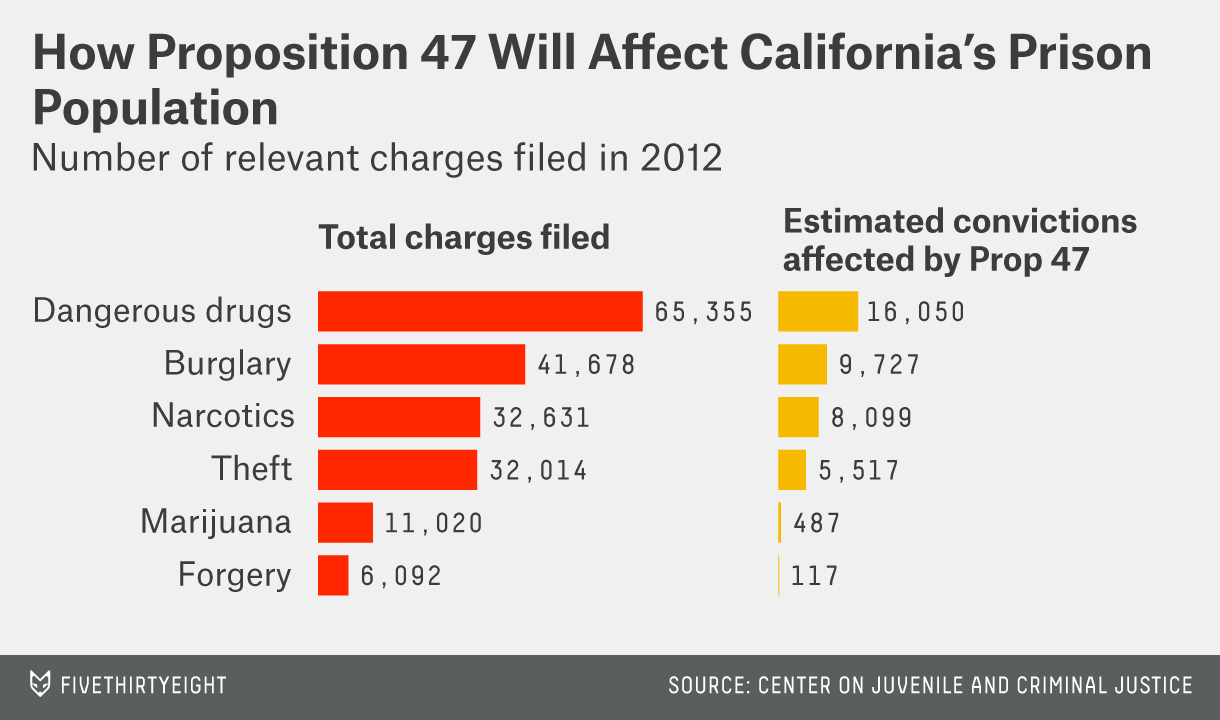 Using 2012 as a baseline, the data shows that Prop 47 will result in about 40,000 fewer charges resulting in incarceration per year. In terms of space in state and county jails, that adds up to a lot of free beds, which also means a lot of money saved. The savings will go to programs for drug treatment, schools and victim services.

Prop 47 has received attention for its potential to “lead the way” on sentencing reform. With a population of 38 million, California is the largest state to implement this type of reform. But it’s by no means the first. So, how do these estimates compare to the states that already had similar measures in place?

This is just a small sample of states that have enacted sentencing reform. Delaware, Hawaii, Kansas, Louisiana, Missouri, New Hampshire, North Carolina, Ohio, Oklahoma, Oregon, Pennsylvania, South Dakota, Vermont, Virginia and West Virginia have all passed measures aimed at preserving prison space for the most dangerous and violent offenders. As is clear from the four states mentioned above, results lean in the positive direction, but are ultimately mixed. Most of the remaining states’ laws were either enacted too recently to provide sufficient data, or their effectiveness simply hasn’t been investigated.

There’s little debate over the fact that the United States’ rising prison population is a problem. But there’s argument over how to fix it: Opponents of Proposition 47 worried the costs would outweigh the benefits, and crime would increase under the law. But there’s little evidence to substantiate that claim — even in Kentucky, where crime increased in the wake of sentencing reform, the bump isn’t necessarily significant. At the end of the day, California was required to do something to decrease its prison population, and other states that have enacted similar measures have largely been successful.

CORRECTION (1:52 p.m.): An earlier version of this story incorrectly identified the organization responsible for a report on Kentucky’s sentencing reform law as the Pew Research Center. It was the Pew Charitable Trusts’ Public Safety Performance Project.