The new economists are heading east this winter.

Hundreds of wide-eyed, besuited, name-tagged graduate students will spend the first weekend of the new year racing from hotel room to hotel room, giving half-hour job interviews about their research papers, what they’re interested in teaching about and future projects. If they’re lucky, they’ll get a callback — typically a “flyout” to an office or campus. Hirers include central banks, investment banks, consultancies, corporations, government agencies, nonprofits, think tanks and universities across the world — from Aarhus to Zhongnan.

Job Openings for Economists — known affectionately, or not, as JOE — lists 1,217 open positions, as I write.

So what do all these young men and women do, exactly — what are their academic interests, and what is their research about? Let’s preview the next generation of economists.

I visited the job candidate websites of top economics Ph.D. programs to canvas the interests of the graduating class.1 There are 308 candidates listed by the 17 schools I looked at — an average of about 18 candidates a school. I recorded their primary field — the main subset of economics in which they work. I also recorded the title of their job market paper. In many academic job markets, including economics, a candidate submits to a potential employer a curriculum vitae, letters of reference and a job market paper. The last is important, and is meant to showcase the candidate’s research interests and skills. In many ways it’s the culmination of their doctoral work.2

These are the fields in which this year’s economist crop works. I’ve included just those fields that appeared at least twice. 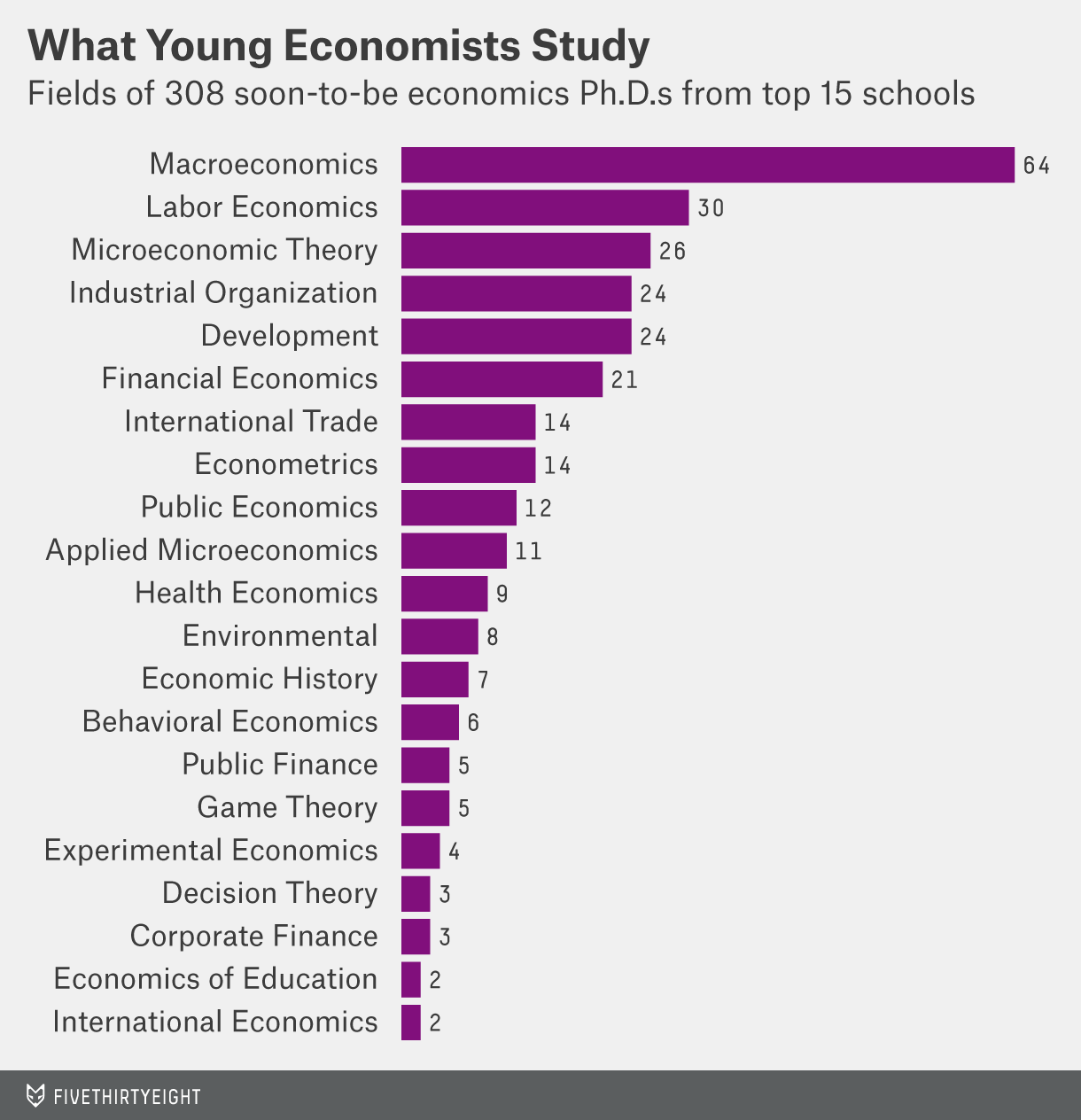 However, there is also significant overlap between many of the fields, and the boundaries are fuzzy. Industrial organization, for example, is the study of firms, and how they behave and fare in different types of markets. An expert in “IO” might go to work for, say, the Federal Trade Commission. Game theory is the study of strategic interactions among small groups of actors, and resembles mathematics as much as it does anything else. A true game theorist is likely bound for academia. Both fields could easily be included in a broader microeconomic category. Some international economics could be combined with some development economics, and so on. For this chart, I’ve remained true to the fields as the candidates had listed them.

Also, certain schools’ students tend to cluster in certain fields. Seven of Minnesota’s 16 candidates do macro. Only one of Yale’s 12 does. Caltech is two-thirds theorists; MIT has only one.3

Many schools give qualifying exams in a student’s early grad school years in three subjects: macroeconomics, microeconomics, and econometrics. Econometrics — sophisticated statistics and mathematics applied to economic data — is the least populated of the three, with just 14 listing it as their primary area of research.

Collapsing some of the overlapping categories above gives a rough “macro-micro-metrics” breakdown of new Ph.D.s at rough percentages of 45/45/10.

Maybe we can learn even more from the job market paper titles. They’re a motley bunch. There are the highly descriptive: “Asymptotic Sizes of Subset Anderson-Rubin Tests with Weakly Identified Nuisance Parameters and General Covariance Structure.” The punny: “Bittersweet: How Prices of Sugar-Rich Foods Contribute to the Diet-Related Disease Epidemic in Mexico.” The rhyming: “Dynamic Panics: Theory and Application to the Eurozone.” And even the intriguing: “How to Catch Capone: The Optimal Punishment of Interrelated Crimes.”

Which words crop up in titles a lot? (I’ve omitted the uninteresting prepositions, conjunctions, articles and the like.)

On the whole, this is unsurprising. Economists tend to look for evidence of effects in markets using models built on theory and so on. I could also easily imagine an economist musing on the role of choice and its impact on public health, or something.

We could also try looking at bigrams, or unique two-word phrases, for some more specific research topics. These are the bigrams that appear at least thrice in titles.4 (Again, I’ve omitted the uninteresting phrases with articles, conjunctions or prepositions.)

Again, a macroeconomic topic — business cycles — is most common. The strong interest in labor economics is evident again here as well, and the interest in disability insurance and health outcomes is notable.

The website Economics Job Market Rumors, feverishly visited during the winter months by many job-seekers, maintained a wiki of last year’s candidates. While it included candidates from schools other than those I considered, its data points to some similar conclusions: Macroeconomics was the plurality winner, with 66 of the 413 candidates the site listed for 2013. Microeconomics was a close second with 60. Last year, micro may have even eclipsed macro if one included some allied fields — like industrial organization or public economics — under the micro umbrella.

It takes all kinds, and economics’s top-down macro and bottom-up micro disciplines are both well-represented by recent cohorts.

If nothing else, the research interests of this new cohort of economists are broad. And they’ll have lots of places to go. The Department of Transportation is hiring, as is the Census Bureau. Harvard needs an environmental fellow, and UCSD needs a finance professor. Utah needs faculty in a Society, Water, and Climate program. And — proof that it really does take all kinds — Arizona State is seeking an assistant professor of future thinking.