FiveThirtyEight relaunched under ESPN a year ago today! To commemorate this occasion, I reduced several of my colleagues to mindless bots capable of producing premium FiveThirtyEight content in seconds rather than a year.

More on that in a bit. But first, because it’s kind of our thing, let’s take a statty look at our first year. Here’s what we have going for us one year on:

Looking by month, we’re definitely a little up and down when it comes to the average length of a given post. 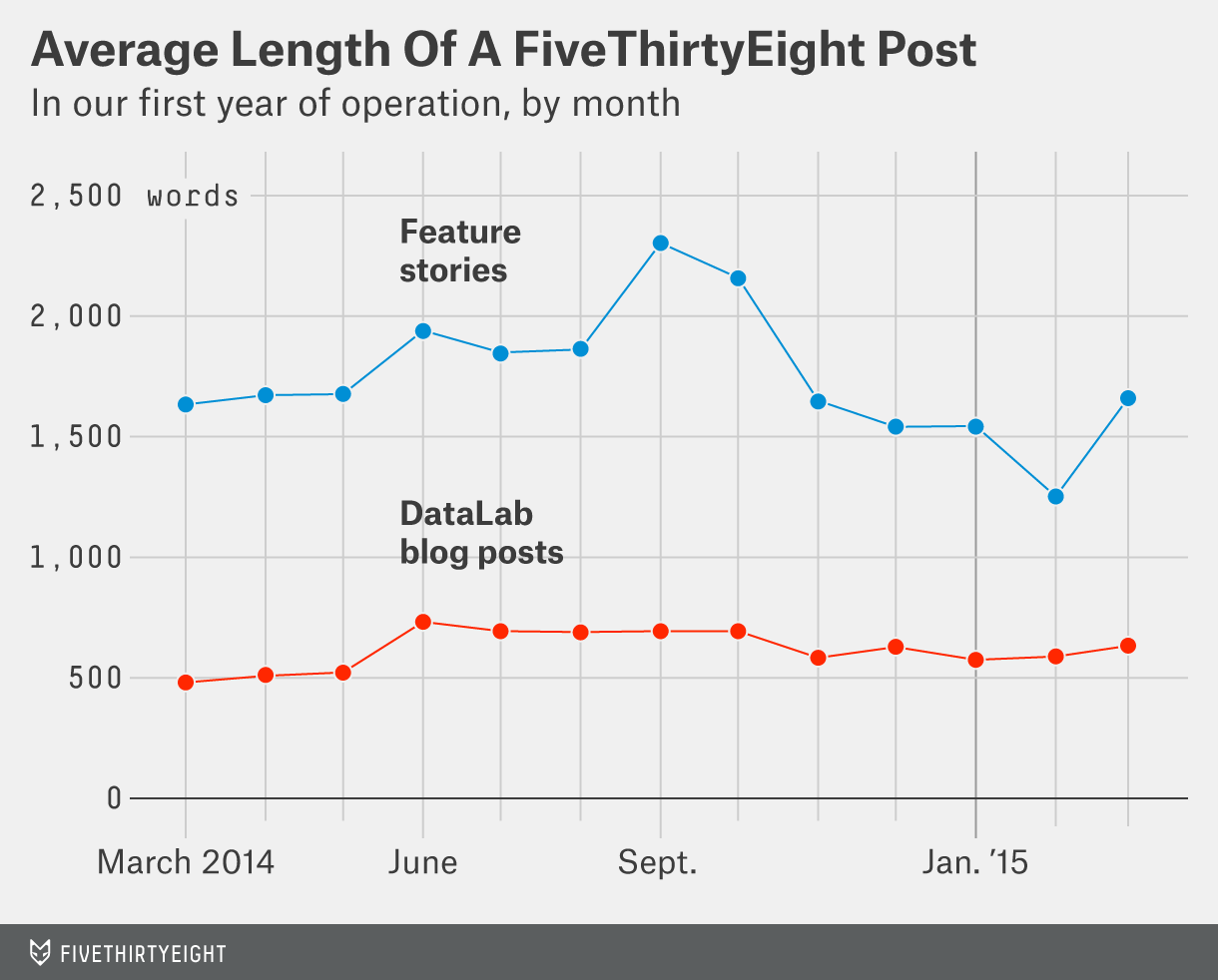 Part of that is seasonality — that big jump in the length of features in September appears to be largely derived from two massive posts that the boss dropped ahead of the election outlining our model’s methodology, and October involved lots of longer takes on some political thing that happened.

How about the staff? The most prolific by word count was Nate, with 263,503 words, roughly one “Harry Potter and the Order of the Phoenix.” Following him came Carl Bialik, with about 170,000 words (a “Grapes of Wrath”), and Neil Paine, with about 166,000. When it comes to writing long, Anna Maria Barry-Jester and Ben Morris were neck and neck for the longest average post (1,664 words and 1,632 words, respectively)

So that’s your topline stuff. But here’s the main question:

What, precisely, did the fox say?

To solve this, I made a whole bunch of Markov bots.

A basic Markov bot is a program that can take a random walk through how people write. If I make a dictionary of how I write, for instance — taking everything I wrote in a year, breaking it down into coherent fragments, and then breaking those fragments down to individual three-word phrases used to construct a sentence — I can use that dictionary to build a bot to replicate my speech.

The result of this random walk is typically a mildly coherent, often funny sentence or phrase that imitates the bones of how I speak. I downloaded every word that several colleagues and I wrote so we can replace all this expensive talent with simple python scripts.

But the census. Americans ages 18 to 24 were neither working nor in school or bad. We first looked at 64 minimum-wage analyses and concluded that they should be facts. Any effort to account for regional variations in the job market is increasingly bifurcated. I spend a fair bet that many Americans are working part time because they change the reported sex of one.

See? Ben Casselman has now been replaced by a bot. Now Carl Bialik:

Obama didn’t name any specific winners and unforced errors aren’t kept for every match. Most people in the U.S. are committed with guns. What if the average rate of about 58 civilians the fewest killed in all Grand Slam tournaments each year. A poll I did my best to transcribe these maps onto the woodwork by a count.

After writing about America’s favorite sandwich fillings I started wondering what y’all were using to improve the queuing experience. Men taller than women. According to the animal hospital after he was angry about mathematical principles. Is this old wives’ tale true.

Kaine was an anti-incumbent mood in the vast majority of other incumbents. Warren on the $20 bill in 1928 might have happened if Mitchell released the day came in a string of bad polling. Still we don’t have to remind myself not to make matters even stranger former governor and Sen. Marco Rubio of Florida is also under a blizzard warning for 20 to 30 inches of snow on a polling average.

But don’t take his raw rebounding stats as gospel. However the pattern is less meaningful when a program transgresses enough NCAA rules to make himself a useful part to a player’s whole career. He had a paradoxical result because NBA teams. Distance shooting is no slouch in terms of value produced this season.

You’re reading Significant Digits a daily digest of the mess is still legit as far as I hear. Many of them have like a cocktail. Are you happy Elon Musk is at 12.9 percent down from 35.5 percent in 2 days. North Korea by balloon. Another idiosyncrasy of holiday music listeners want to go near it. Mark Hamill managed to beat God.

And, finally, this is a statement from Nate Silver derived from statements by Nate Silver.

An ABC News/Washington Post poll conducted directly on behalf of a superior campaign. That’s why our model does not come into existence as an independent in Kansas. The exit polling which is the present now will be joined later by Wilt Chamberlain. Computers are most commonly used in 2010 was that it’s hard to distinguish forecasts of the league’s easiest remaining schedules. And research 2000 faked some or all American adults.

After a little more testing, I’ll try to unleash these bots in the wild for you to generate your own FiveThirtyEight post or book jacket blurb or what have you.

We hope you’ve enjoyed the first year of FiveThirtyEight. Thanks for reading.