Looking at the performance of the stock market offers both promise and peril in providing insight into the future direction of the economy. The promise comes because the market, in a fundamental sense, ought to reflect anticipated future profits of a wide array of publicly-traded large and midsize businesses. All else being equal, these companies can be expected to earn more money in good times than in bad, and therefore economic expectations will be reflected in their share prices.

The peril comes because the market will also pick up a whole host of other things that aren’t particularly relevant to the well-being of the economy as a whole. For example:

1. The anticipated tax treatment of stock market investments (and personal income in general);

3. Anticipation about the degree of public spending as a proportion of GDP. If the government provides services that could potentially be provided by the private sector, this will lower aggregate corporate earnings (and therefore stock prices), whether or not it is beneficial to the economy as a whole;

4. The degree of regulatory protection offered to established, publicly-traded businesses versus other types of businesses. For example, policies that tended to incentivize the development of wind power in lieu of petroleum would tend to harm the stock market regardless of their overall macroeconomic effects. This is because oil companies are more likely than wind power companies to be (i) already extant, (ii) publicly traded and (iii) included in major stock indices.

I would argue that all of these factors are responsible to some degree or another for the present condition of the stock market. Investors may rightly be worried about the economy, but they may also be worried about the extent to which the Obama administration will protect established corporate interests — i.e. their interests — as opposed to broader economic ones. This is most clearly seen with the so-called Geithner put; equity holders in Citibank would much prefer it to receive an infusion of taxpayer dollars than to be taken over by the government, since they would be severely diluted or wiped out if the later occurred. But this has little to do with the question of whether bailouts or takeovers represent better public policy and are better for the economy in the long-run.

To make myself clear, this is not some abstract, ideological critique of equity markets, nor of the institution of the corporation. I am a pro-growth Democrat, and I am an investor myself. It is, rather, an attempt to elucidate the ways in which the interests of equity holders as reflected in (say) the S&P 500 may differ from those of the economy as a whole.

A more useful way to evaluate the stock market’s perceptions about near-to-medium term economic growth may be to compare the performance of different groups of stocks. Some companies are more susceptible to business cycle fluctuations than others — Campbell’s Soup is famously recession-proof, whereas a luxury hotel company will tend to be more cyclical. (Unsurprisingly, Campbell’s has lost “only” about 17% off its stock price over the past year, whereas Marriott International has lost almost 60%). If we could look at the relative performance of cyclical stocks versus more durable ones, we could get a better sense for where the stock market thinks we’re headed in the business cycle.

As it happens, this is very easy to do because of the presence of various sector SPDRs (‘spiders’), which are essentially just mini-stock indices consisting only of certain types of companies. Two SPDRs are particularly useful for our purposes. One, which goes by the exchange symbol XLP, is a spider of companies that produce consumer staples, and includes stocks such as Wal-Mart, Coca-Cola, and Campbell’s Soup. The other, XLY, is an index of consumer discretionary products, and includes things like Home Depot, Carnival Cruises, and Ford Motor Company. The delineation between the two funds is not perfect — for example, McDonald’s gets classified as a discretionary good when it behaves more like a staple — but should do relatively well for our purposes.

The number I’m going to show you is simply the ratio of XLY to XLP — that is, the ratio of the share prices of consumer discretionaries to the consumer staples. I will multiply the result by 100 for ease of reading, and call it the CEI, for Cyclical Expectations Index. Higher CEI’s indicate positive expectations about the near-term performance of the economy, whereas lower CEI’s indicate bearish, recessionary sentiment. Here is how the CEI has performed since late 1998: 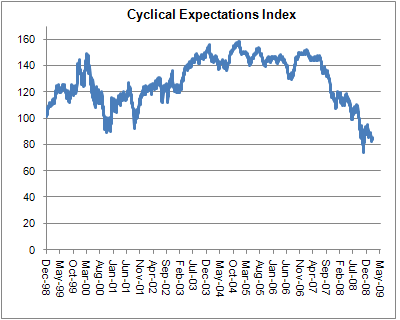 It appears that when the CEI dips below 100, this indicates recessionary expectations. The CEI fell below 100 on October 11, 2000, about five months in advance of the recession that began in March 2001 (it also briefly dipped below the 100 mark following the events of September 11th). The CEI also began falling significantly as of about August 2007, losing 25 percent of its value in the second half of that year in advance of the current recession, which dates back to December 2007 . In both cases, the CEI was much quicker to anticipate the recession than the broader S&P 500: 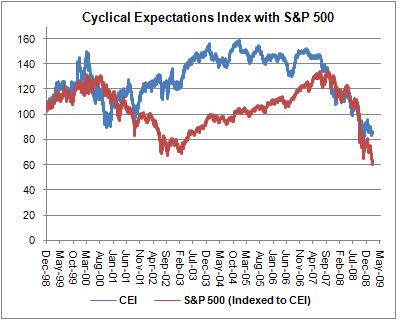 So what has happened to the CEI since Obama took over? Let’s zoom in on the past couple years of returns: 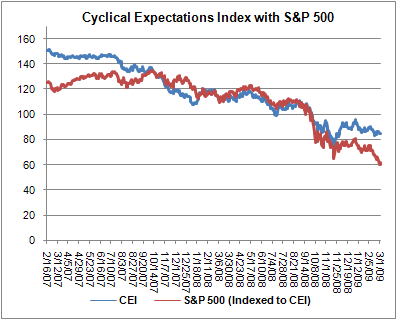 As I mentioned, the CEI was much quicker to anticipate the current recession than the S&P 500, which didn’t shed any real amount of value until the recession was already well under way. But also unlike the S&P 500, the CEI has not been particularly responsive to events of recent weeks. On inauguration day, the CEI stood at 85.5; yesterday, it closed at 85.1 (although it’s closer to 83.6 as of midday today). The S&P 500, by contrast, has lost around 12 percent of its value over that period. And since Election Day, the CEI is down about 10 percent versus the S&P’s roughly 30 percent.

There is also some evidence that the CEI responded favorably to the stimulus package. On November 24, 2008, the CEI jumped by 6.5 percent, its largest single-day increase since April, 18, 2001, when Alan Greenspan cut interest rates by a larger-than-expected margin. What happened that day? Obama made it clear that he wanted an “aggressive” stimulus package. (This was also the day that Obama officially rolled out his economic advisory team. However, the markets had known about the composition of Obama’s advisory team as of the previous week — and had already rallied in response to it — whereas the characterization of the stimulus package was actual news).

All of this gives us a rather different perspective on what the stock market is really telling us about the broader economy. The CEI is down about 10 percent since Election Day, is up about 10 percent since the last day of trading before Obama announced his “aggressive” stimulus, and is essentially unchanged since Obama’s inauguration. The market is not becoming particularly more pessimistic about macroeconomic conditions (although it has certainly retained its previous pessimism) — if this were true, we’d see cyclical stocks losing further value relative to more economically robust ones. But that largely isn’t what we’ve been seen. Instead, the stock market is engaged in something of a pity party — the prevailing emotions being fear and loathing. It is concerned about policies which might be burdensome to equityholders in large corporations while perhaps nevertheless being boons to economic recovery.