The French Communist Party (Parti communiste français, PCF ) was once the backbone of the left in French politics and a major power in national elections. While the PCF remains an important power broker among the center-left and an ocassional partipant in left-side governments, the party’s vote share has plummeted in the last 25 years.

PCF’s vote share from the elections to the French National Assembly in 1978 and the European elections of 1979 was nearly 21 percent, while in the most recent parliamentary elections, 2002 and 2007, PCF received less than 5 percent of the national vote. 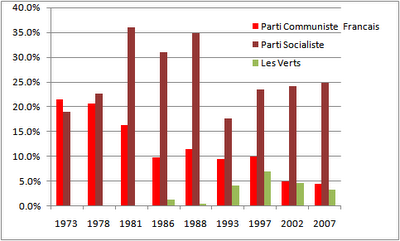 The above chart shows national legislative elections among the larger left-side parties in France (there are several other small ones, like the Radical Left) since 1973. Among the left, the Communists have been taken over by the Socialist party and have been eroded by the Greens.

At the same time, the French left as a whole has struggled in more recent years, with the right holding the presidency since 1995 and the national assembly since 2002. In fact, in the 2002 Presidential election, decided by run-off, center-right candidate Jacques Chirac face not the Socialist Party’s Lionel Jospin in the runoff, but instead far-right candidate Jean-Marie Le Pen — to the enormous embarrassment of the left.

The ails of the French Communists — some of which apply to the French left as a whole — have been widely discussed in France and among the academic community. Five major problems have not adequately been dealt with by the PCF:

1. Changing demographics: With it’s base among rural agriculturalists and blue-collar workers, the party’s base is shrinking as France becomes more urban and less dependant on manufacturing. While both areas remain important for the country, they are generally declining as a proportion of the electorate.

2. Loss of connection to the past: The French Communists were very important to the country during and after World War II. Sometimes called “the Resistance generation,” these past leaders, activists and voters have been replaced with the boomer generation, who have little nostalgia for the old days. Young, student voters, who are the bread and butter of French activism of this sort, are regularly pulled towards other parties (Radical left, Greens, etc.)

3. Over-connection with rigid principles: The Communists, to this day, regularly argue that those in the “center-left” have corrupted their principles for the prize of power. As well, the PCF now accepts that for decades, the Communists were overly reliant on Moscow for ideas, vetting of people, etc., as the Soviets were rapidly losing support and reputation in France.

4. Poor leadership: The bottom line regarding leadership is that many PCF leaders were out of touch with their base and the French public at large.

5. Refusal to move towards the center: Linked with point 3, the Communists have had a very tough time moving to the center (even the center-left). As a result, many voters would sit elections out or defect to the Socialists or Greens over time. This problem can been seen most effectively with the second Chirac election (2002), where the Socialist candidate was outvoted by the Front National’s Le Pen because of the highly polarized and fractured left (the communist movement had more than 5 candidates, who collectively took more than 20 percent, as compared to the Socialists’ 16.2 percent).

The communists have been most successful when it participated in a broad left-side coalition, such as the 1997-2002 “Plural Left” coalition under Lionel Jospin, which roundly defeated the right (320 seats to 251 seats). Similarly, the Presidency of Francois Mitterand (the last President from the left side), was elected when the vote from the left was far more centralized (he received 26 percent in the first round in 1981, and 34 percent in 1988).

As alluded to by the title, there are clear parallels between the French Communists and the right-wing of the Republican party as it stands today. The cautionary tale that fragmentation equals marginalization has been echoed far and wide by political observers, as the moderate and more radical wings of the American right fight for supremacy in the Republican party.

Several elements of the comparison are not an exact fit, for example that France is a pluralistic, parliamentary democracy in terms of the legislature, whereas the US is a two-party system with completely district-based voting. However, the conceptual issues fit quite snugly.

Therefore, below are a few concerns for the factions of the American right, in terms of political positioning and avoiding overly-damaging fragmentation. The following categories have certain overlaps, as any political grouping analysis does, however, it hopefully captures the main ideas. 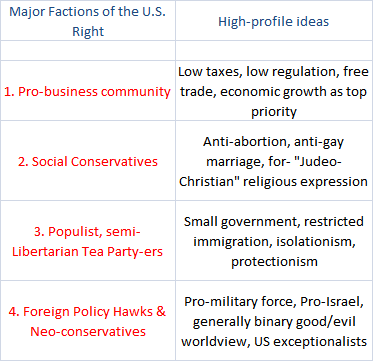 1. Pro-Business Community: The biggest threat here is that Republicans become split in a time of economic downturn between the haves and the have-nots. The U.S. has a largely pro-business orientation and this interest group has several of the most influential lobbying shops in the country. However, the perception that the big-money interests are overwhelming and subverting “Main Street” has pervaded since the financial crisis.

2. Social Conservatives: Hot-button issues have long gotten social conservatives out to vote, but some from this faction have felt marginalized and taken for granted by the Republican establishment. At the same time, though the country remains polarized on two big ones, abortion and gay marriage, these issues are shifting away from being the undeniable motivators they once were.

3. Populist and Tea Party-ers: Drawing from the long traditional of challenging government in the U.S., the Tea Party people are both empowered and endangered by their outside-the-mainstream approach. Basically, they will have to integrate again with the establishment, whether by breaking it down and building it up in their image or by moving towards the center in terms of policy and ideology. The Tea Party crew is likely the group most at risk of going the way of the Communists in France — loud, motivated, but systematically out of power.

4. Neoconservatives & Hawks: The Neocons, led in 2009 by Dick Cheney’s high profile interventions, have been loudly protesting the Obama foreign policy approach. Some have called the Bush Doctrine, which epitomized many of the Neo-conservative and Hawkish ideas, a discredited approach, while others have argued that it will be born out in the future analysis. While there are many foreign policy Hawks in government and Congress today, many felt burned by the Bush approach.

All told, the recent history of multi-party democracy, whether in Europe or North America, has rewarded big-tent parties and coalitions, rather than strongly ideological movements. While they gain steam in the short term, radical movements have usually fizzled out, because support for a change of political system is not there. Even in France, where there is ocassional discussion of a Sixth Republic (changes to the system), the public has not been interested in truly radical action. So, without a movement to the mainstream center, on the fringes you will remain.
—
Renard Sexton is FiveThirtyEight’s international columnist and is based in Geneva, Switzerland. He can be contacted at sexton538@gmail.com