An athlete lives at the whim of a sport’s rules, and when those rules change, so can their career. This happened to Mike Bridges. You’ve probably never heard of him, but he’s one of the strongest men who’s ever lived, and he was a powerlifting god in the early 1980s.

Bridges weighed just 173 pounds, but at the 1983 U.S. Powerlifting Federation’s (USPF) national championships, he bench pressed, squatted and dead lifted1 a combined 2,011 pounds. But when Bridges took the stage later that year at the International Powerlifting Federation (IPF) championships in Gotenborg, Sweden, and fired off the three lifts, his typical strength wasn’t there. He totaled just 1,780 pounds — 231 pounds, or 11.5 percent, less than he’d lifted four months before. What’s more, nearly every powerlifter who competed at the U.S. competition and went on to the IPF event saw a significant drop.2

What happened? In 1983, the IPF began to test athletes for performance-enhancing drugs (PEDs).

The call to drug-test powerlifters had been gaining momentum in the sport since the mid-1970s. Just a few years before, powerlifters had been using PEDs in low doses to help their muscles recover; maybe they gained a bit of an edge, but it wasn’t overtly noticeable. “Then, around the mid-’70s, people realized that taking huge doses increased their lifts,” said Bob Gaynor, a powerlifting historian and competitive lifter from the era. “From then on and into the ’80s, I’d estimate that about 85 percent of competitive American powerlifters at the national level were using something in massive doses to gain an edge: anabolic steroids, dianabol, testosterone.”

Use was rampant, but that didn’t mean every lifter wanted to pump himself full of chemicals. “Guys felt like they had to take them to stay competitive, and that became problematic,” Gaynor said. So, after the 1983 IPF event, he and others formed the American Drug-Free Powerlifting Federation. It was a bold move, because the USPF was popular — its competitions were even nationally televised. “Powerlifting had one federation, one national champion,” Gaynor said. “Steroids split us into two federations.” Over time, more groups broke off from both the USPF and drug-free federation, splintering the sport further. Today, there are about eight larger federations and tens of smaller ones.

The division between the drug-tested and non-drug-tested competitions makes powerlifting a unique window into what effect today’s PEDs have on an all-important athletic skill: strength. Do guys in anything-goes competitions regularly hoist heavier weights than guys in drug-tested meets?3 Why allow PED use at all?

“I don’t drug test at Raw Unity for a couple reasons,” said Eric Talmant, who organizes and competes in Raw Unity, an event considered by some to be the Super Bowl of American raw powerlifting. “Tests are cost prohibitive. They run around $140 a piece, and I don’t want to pass the cost onto the lifters, because I honestly think that the majority of elite guys in the sport just don’t care that much anymore. Second, the guys that want to do drugs and get around a test can and will.” On the other end of the spectrum, USA Powerlifting (USAPL) vehemently tests lifters, and its slogan is “America’s choice for drug-free strength sport.”

Modern powerlifters are some of the strongest people in history. The best in the sport can, with perfect form, hoist more than a few times their bodyweight in iron. For example, at a drug-tested meet in 2002, Mike Booker squatted 551 pounds but weighed just 132 pounds. That number is even more amazing when you consider that at the 1968 German powerlifting championships, 176-pound Arnold Schwarzenegger squatted 460 pounds. That makes Booker about 62 percent stronger than Schwarzenegger was in his prime.

When we talk about how PEDs improve performance in sports — e.g. in the NFL, Major League Baseball and the Olympics — what we’re really talking about is how the drugs make an athlete’s muscles more efficient in terms of strength and recovery. “Steroids have been clearly shown to increase muscle mass, and there’s a direct correlation between muscle cross-sectional area and the ability to produce force,” said Brad Schoenfeld, an exercise scientist at the City University of New York’s Lehman College. “Steroids also tend to decrease body fat. So, as a powerlifter, if you stay in the same weight class but you lose 10 pounds of fat and gain 10 pounds of muscle, you can be tremendously stronger, because fat doesn’t help you lift weight. And some new research shows that they help you better activate the muscle, increasing strength.”

Strength is like a glass, said lifting coach Brett Jones, who is considered one of the best trainers in the country. “Everything else is the liquid inside the glass. The bigger the glass, the more of ‘everything else’ you can do.” All other things being equal, the stronger you are, then the quicker you run, the harder you hit, the higher you jump, the faster you throw. That being said, steroids, insulin-like growth factor 1 (IGF-1), clenbuterol and other banned substances don’t make an athlete more skilled at his sport — they amplify skills he already has. In football, the drugs can help a fullback break through what would have been a tackle; in baseball, they can help a pitcher take a 95 mph fastball to 98 mph (and also help him recover between starts).

But just how much horsepower and torque do athletes gain? We looked at the numbers in three of the biggest competitions: Raw Unity, USAPL’s Raw National Powerlifting Championship (Raw Nationals) and the IPF’s Classic Powerlifting World Championships (Classic Worlds). The events draw the best lifters in the sport of raw powerlifting, which means the men don’t use assistance gear.4 As previously mentioned, Raw Unity doesn’t drug test. Raw Nationals is drug-tested, and the Classic Worlds tests but perhaps not as strictly as the USAPL event. More on that in a bit.5

The numbers from these competitions aren’t perfect; for example, the IPF just started hosting a raw championship,6 so there are only three years of comparable data. And in some years at Raw Unity, a weight class might only have two lifters (an athlete has to be very strong to qualify for the event). It’s also important to note that competitions use different weight-class systems. They’re close enough in the lighter classes, but the heavier guys are differentiated in such a way, for example, that an IPF lifter could be up to 23 pounds heavier than a Raw Unity competitor in an “equal” weight class. That’s huge, because more muscle gives these athletes more power to perform with.

That all said, here’s how the average lifter’s totals (squat, bench press, dead lift) at the competitions compare. 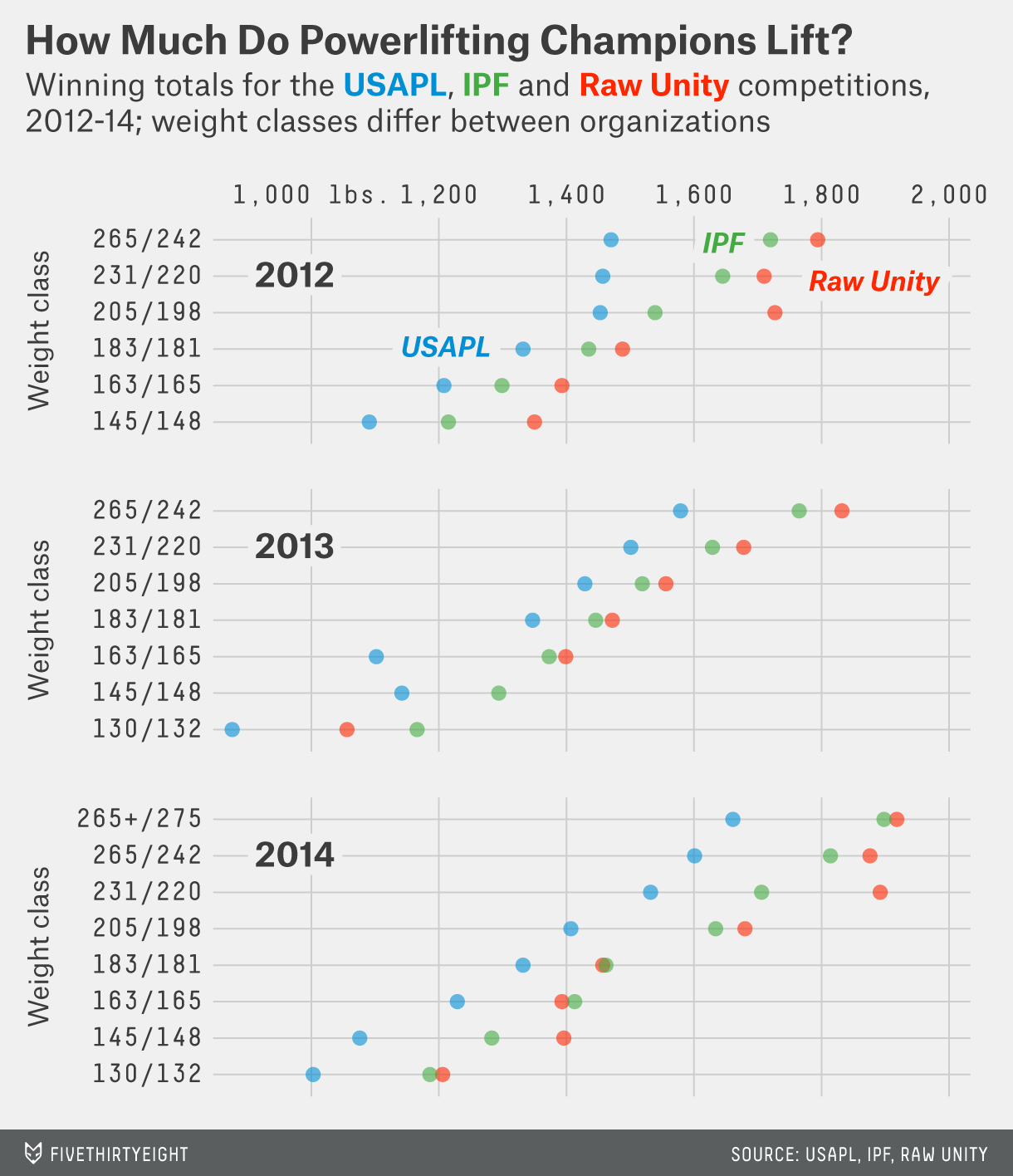 In total, the lifters at Raw Unity put up about 17.44 percent more weight than the lifters at the USAPL competition and 3.46 percent more than those at the IPF meet. That might not seem like much, but because these guys lift so much, it translates to between 30 and 344 pounds.

Another set of interesting data is world records. Powerlifting differentiates between world records set at tested and non-tested competitions. Here’s how those numbers compare for each lift.7 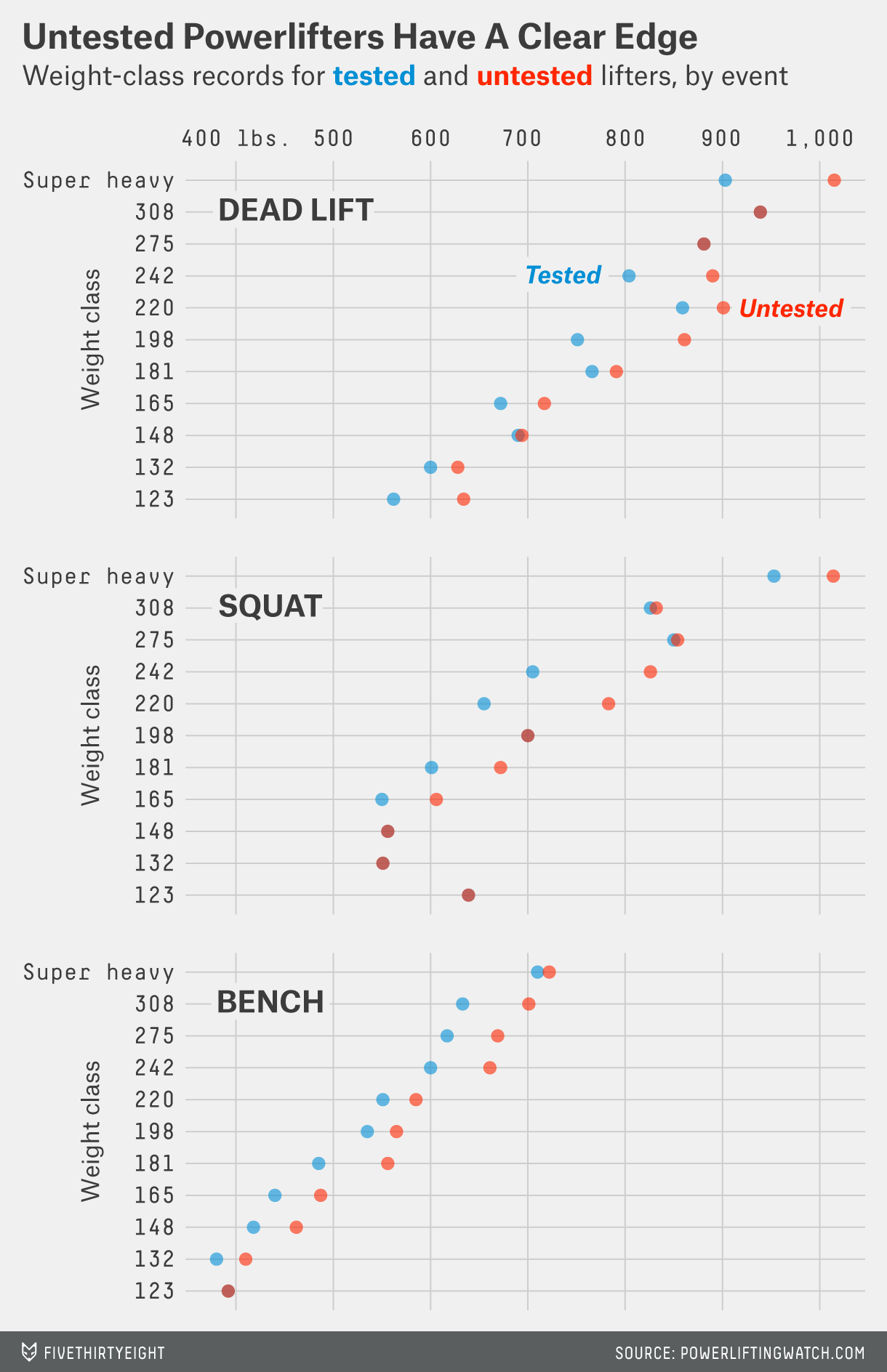 Collectively, the disparities in competition averages and world records between tested and non-tested powerlifters are about what most studies say they should be. For example, research published in the journal Sports Medicine found that steroids can increase an athlete’s strength by 5 to 20 percent. Gaynor said most powerlifters think PEDs give them about a 7 to 12 percent increase in strength.

For all weight classes, world records in bench press, squat and dead lift are, on average, 7.9, 6.0 and 6.4 percent heavier, respectively, when the competition doesn’t test for PEDs. Raw Unity lifters outdo IPF competitors by about 3 to 4 percent and USAPL competitors by 17 to 18 percent. What gives?

Gaynor said lifters at the IPF event have been more likely to get around drug tests, take PEDs leading up to the competition or have a history of PED use. “Most guys at the USAPL meet, on the other hand, tend to not do steroids,” he said. “The events just bring in two different powerlifting cultures.” IPF did not return requests for comment.

The distinction between the groups’ histories with strength-enhancing drugs is important because these drugs don’t just “flush out” completely — they can leave a lasting impact. Consider this 2008 American Physiological Society study, which found that the benefits of steroids in powerlifters can last several years beyond when the drugs leave their body.

So, even if drugs aren’t in an athlete’s system, he might be lifting heavier because he used PEDs a few years ago. He’s laid down a base of muscle that doesn’t just dry up when the drugs do. It may linger and help him kick ass for years to come.