John Oliver is not impressed by state lotteries. In a segment for his HBO show “Last Week Tonight” on Sunday, he described how they’re “sold to us as charitable foundations,” but he finds little evidence that the lotteries have any positive impact whatsoever on most Americans’ lives.

In basic percentage terms, Oliver has a point: Most of the $59.5 billion dollars that was spent on state lotteries in 2012 ended up being used as prize money. That’s a whole lot of money that we know for sure didn’t go toward public education, even though that’s where state lotteries emphasize the money goes, as Oliver shows.

But there’s little centralized data to help reach a more nuanced conclusion about the lottery’s impact in the 44 U.S. states (and the District of Columbia) that have one. Even if such data did exist, it would have to be treated with a great deal of caution because it’s difficult to track specific spending of lottery revenues (or, as Oliver rather more graphically puts it, tracking money in state budgets “is a bit like trying to piss in one corner of a swimming pool”).

What we do have, though, are Census Bureau statistics showing gross revenue in states that have lotteries and how that money is allocated among lottery administration, prizes and state funds. It’s that last allocation, to state funds, that Oliver is particularly skeptical about. So, how big is it?

The original data is available here, but to make the comparisons fairer, in the chart below we’ve adjusted state lottery revenues to express them in per capita terms. There’s no data for D.C. and the latest figures available are from 2012, which means Wyoming isn’t shown because its lottery began operating in July 2013.

In the states for which we have data, $59.5 billion dollars was collected in revenue from state lottery tickets and games in 2012, which averages to $200 spent on the lottery per resident. But that figure varies considerably — it’s highest in Massachusetts, where residents spent on average $671.46 on the state lottery in 2012, and lowest in North Dakota, where the average amount spent was just $36.12.

About two-thirds of lottery money is set aside for prizes. Then a small fraction, 5 percent nationally, is allocated to administration — that covers things like salaries and advertising. What’s left is money for the states to spend. As the chart shows though, the split among those three categories — prizes, administration and revenue for the state — varies greatly. 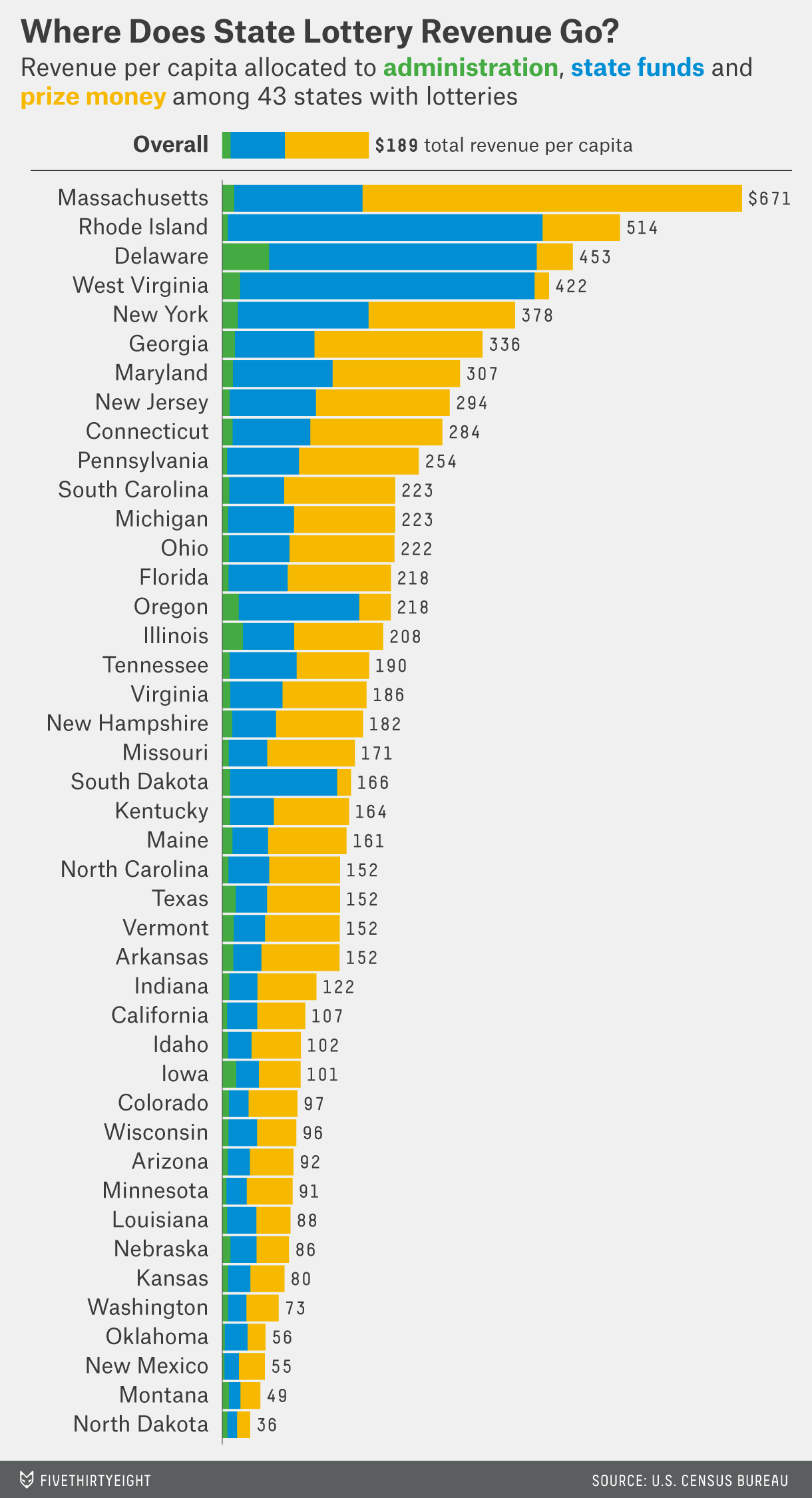 Of course, this data says no more about how these 43 states spent the $19.4 billion they collected in lottery revenue than it tells us about the way that players spent the $37 billion they collected in prizes. Nor does it say anything about whether the people who benefit from that state spending are the ones most likely to play. What the data does tell us is that state lotteries generate vast revenues, most of which don’t head back to the states.