My first take on Arlen Specter’s defection to the Democratic Party was rather skeptical. Although the move is undoubtedly quite psychologically damaging for the GOP, there is room to question how much it will actually change the way that the sausage gets made in the Congress. If, for example, Arlen Specter is a Ben Nelson kind of Democrat, voting against initiatives like EFCA while driving an extremely hard bargain on health care, it is hard to see how Democrats gain, since there is little to distinguish a Ben Nelson type of Democrat from an Arlen Specter type of Republican.

I’ve now had the chance to examine the data on party-switching in more detail. When Congressmen have changed parties in the past, this has generally been accompanied by relatively material changes in their voting patterns — thus, Democrats have ample reason to be pleased. Nevertheless, odds are that Specter will line up squarely in the conservative half of the Democratic caucus and will probably leave room to his left for a primary challenge.

Since 1980, according to Wikipedia, 20 Congressmen (16 Representatives and 4 Senators) have switched from one party to the other. The vast majority of these switches — 17 of 20 — were from the Democratic Party to the Republicans, mostly among conservative Southern Democrats in the 1980s and early 90s. Only Specter, Long Island Representative Michael Forbes and Jim Jeffords have gone the other way. I classify these Congressmen, by the way, by which party they caucused with regardless of how cute they tried to get about the label attached to their name. Thus Jeffords is treated as going from Republican to Democrat even though he still called himself an independent, whereas Joe Lieberman is not classified as a party-switcher because he never ceased caucusing with the Democrats.

I then looked up DW-NOMINATE data for each of these party switchers. DW-NOMINATE is a liberal-conservative classification which has conveniently assigned scores to each Congressman in each Congress from the 18th Century onward. DW-NOMINATE scores generally run from -1 for an extremely liberal Congressman to +1 for an extremely conservative one (although ratings slightly greater than 1 or less than -1 are possible under exceptional circumstances). The ratings for a select group of Senators in the 110th Congress follow below. 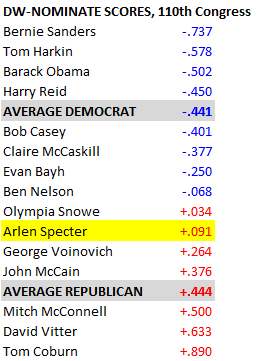 A “typical” Congressman from each party will usually have a scores of about ±.4 or ±.5. Members with scores of ±.55 and higher can usually be thought of as being quite liberal or quite conservative, whereas moderates will usually receive scores of about ±.35 and lower. Democrats, by the way, can receive positive scores and Republicans negative ones, although this didn’t occur for any Senators in the 110th. Specter’s score was +.091, making him the third least-conservative Republican after Olympia Snowe and Susan Collins.

The next step was to look up the DW-NOMINATE scores for the party-switchers, comparing their figures in the Congresses that came both immediately before and immediately after the party change:

All of the party-switchers moved toward the direction of their (new) party caucus after making the change, although with somewhat varying degrees of magnitude. California’s Matthew Martinez, for instance, who had not been an exceptionally moderate Democrat, turned all the way into a rather run-of-the-mill Republican. On the other end of the spectrum, you’d have had to look pretty hard to find issues on which Congressman Gene Atkinson of Pennsylvania was voting differently after becoming a Republican in 1981.

The average magnitude of the change was ±.394 points, with about two-thirds of the cases somewhere between ±.3 and ±.5.

There are both aggravating and mitigating circumstances that may affect Specter’s positioning. On the one hand, he seems to have made the switch more or less unabashedly for electoral reasons, even alluding to the polling in his statement today. This suggests that he’ll be no more and no less Democratic than he can get away with. On the other hand, the parties are now more polarized than they once were, and so crossing the aisle may mean more than it once did. Prior to this party-switch, Specter’s DW-NOMINATE scores had gradually been moving away from the center as it had become harder to stake out a position as a moderate Republican.