If we look back at the trajectory of Barack Obama’s approval ratings, which began at about 65 at the time of his inauguration and have fallen to about 48 now, there were two periods that account for most of the decline. One was the period immediately following his inauguration until about the first week in March; Obama’s ratings fell by about 5 points over this interval. The other was a longer period from the end of May through mid-August, during which time Obama’s approval declined by 9 points or so. Those two periods collectively account for about 14 points of the roughly 17-point decline that Obama has experienced.

There’s a fairly intuitive explanation for what was happening during that first period in February: the honeymoon was wearing off, as happens sooner or later for most Presidents — and sooner, perhaps, for one who was attempting to push huge policy initiatives like the stimulus from his first day on the job. But its a bit less obvious what sent his numbers on such a sharp downward trajectory in that second, roughly 75-day stretch from late May through mid-August.

Was it the economy? Undoubtedly, the economy is a significant part of the story. The employment reports that came in during this period showed the economy losing about 300,000 jobs per month, which is really, really bad. Still, it wasn’t as bad as the reports that came in during April and May, which had the economy losing 500-600K jobs per month, and during which time Obama’s numbers were rather steady. (A more robust indicator, perhaps, is consumer confidence, which had a bit of a reversal in June and July before picking up again, but the correlation there is still fairly weak.)

Well then, perhaps it was the health care debate? I have a bit of a side project to track what the lead story is on any given day on the content aggregator Memeorandum. Some days are relatively newsless, in which case no story is assigned to that day, but most of the time it’s clear enough what everyone is talking about. According to my tally, the health care debate was the lead story during the following dates:

Let’s take that graph from before and plot these dates (as shown by the red shading) against the trajectory of Obama’s approval numbers. I’ve also indicated the dates in January and February during which time the stimulus debate was the lead story, as indicated by the blue bands below: 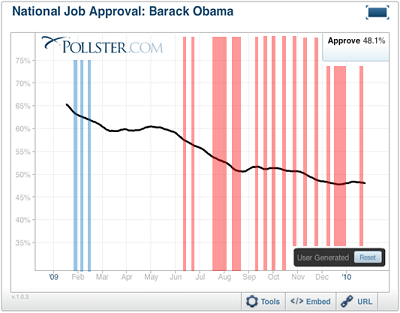 The fit isn’t as good as you might think. Health care didn’t become the lead story on a consistent basis until July 15th or so. But Obama’s approval ratings had already been on a 6- or 7-week downward trajectory by then. In addition, Obams’ approval ratings weren’t particularly impacted during other very intense periods of the health care debate, such as the second half of December. So it is not obvious how much blame we should lay at health care’s feet.

What other stories were leading the news in June and early July, when Obama’s approval ratings were steeply declining but before health care had crowded the other news out? From the period encompassing May 21st though July 14th, I have the Iranian elections being the lead story for 8 days, the SCOTUS vacancy and the nomination of Sonia Sotomayor being the lead for 9 days, and Sarah Palin (in particular, her decision to quit as Alaska’s governor) being the lead for 11 days. Otherwise, we had a hodgepodge of stories like Mark Sanford and the CIA torture probes, but none controlled the headlines for more than about 24 hours at a time.

I’m going to take it for granted that Obama wasn’t negatively impacted by Sarah Palin’s having gone rogue and left Alaska’s governorship. But could the other two stories — Iran and Sotomayor — have been bigger negatives than people think? On Iran, it seems extremely doubtful. The only poll released on Iran in conjunction with their disputed election was from CNN, and it showed just 15 percent of Americans saying that Obama had shown too little support for the protesters (versus 13 percent saying too much and 56 percent the right amount). Apart from a few Beltway pundits, there weren’t too many people critiquing his response.

Sotomayor, too, generally polled somewhat favorably (although most people are fairly indifferent toward SCOTUS nominations). One interesting bit, though, taken from Gallup’s weekly approval tracking by demographic groups. Sotomayor dominated the headlines from about May 26th through May 30th, in conjunction with her nomination. (Her actual confirmation several weeks later was something of an anti-climax.) In the week of May 18th-24th, just before Sotomayor’s nomination, Obama’s approval rating among men was 62 percent, according to Gallup. In the week just after her nomination, from June 1st-7th, his approval rating among men had fallen to 56 percent. So perhaps that nomination, while appealing to Obama’s base, gave him some problems among men — particularly white, independent men, an important swing demographic that has since turned against Obama. And there may have been something of an echo several weeks later when the Henry Louis Gates story hit on about July 23rd.

Another story that was taking place during this period, although it was playing out more in the background, was that Al Franken was in the process of becoming the Democrats’ 60th vote. After a very drawn out process, the Minnesota Supreme Court declared Franken the winner on June 30th and he was seated on July 7th. As Mark Schmitt has argued, having 60 votes was in certain ways problematic for the Democrats; it helped to give rise to the narrative about their “ramming though” a partisan agenda, while at the same time those 60 votes included people like Joe Lieberman and Ben Nelson who weren’t much easier to corral than a moderate Republican might have been. That 60th vote may have come at a high price, in other words, in terms of the way that Democrats came to be perceived by the electorate.

Unfortunately, I’m not going to be able to give you any one incredibly satisfying answer here. The most basic reason for the decline in Obama’s numbers, almost certainly, is that people’s expectations for what he ought to have been able to accomplish on the economy have accelerated faster than his ability to do so. But beyond that, things are a little murky. The periods that represent the steepest declines in Obama’s approval ratings are only loosely related to the periods that provided the most disappointing economic news. Meanwhile, while I’m sure that the health care bill hasn’t helped Obama any, the trajectory of that debate isn’t a great fit for the trajectory of his approval numbers. Finally, factors like the nomination of Sonia Sotomayor and the seating of Al Franken may not have been terribly impactful unto themselves, but may have given rise to unhelpful narratives for Obama and the Democrats that contributed to their problems.

One takeaway here, I suppose, is that the deterioration of Barack Obama’s political fortunes is not quite so easy to diagnose, even in retrospect. It sort of crept up on us — until suddenly it became obvious with Scott Brown’s victory in Massachusetts last week. There’s a role for Monday morning quarterbacking, and it’s certainly fun to think about how the Democrats have become so unraveled and whether there’s anything they might have done to prevent it. But many things that seem obvious now certainly weren’t that way at the time.