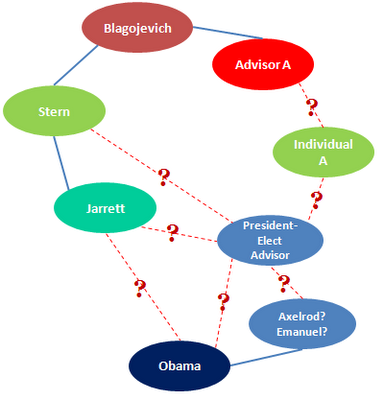 I can’t say I’d give Barack Obama high marks for his handling of the Rod Blagojevich indictment today. But some reporting is being a little presumptuous about what the President-elect and his team might or might not have known. As Jake Tapper writes:

Then there’s the big question about how Blago was so sure — so angry — that Team Obama would not pay to play.

Who in the Obama Team was talking to the Governor’s office?

When they found out that Blago wanted to quid pro quo Team Obama (Jarrett gets the Senate seat if Blago gets a Cabinet position, or a good-paying job with a union-affiliated organization, or his wife gets a seat on some corporate boards) what did they do?

Let’s look at the meat of Fitzgerald’s complaint:

101. On November 10, 2008, ROD BLAGOJEVICH, his wife, JOHN HARRIS, Governor General Counsel, and various Washington-D.C. based advisors, including Advisor B, discussed the open Senate seat during a conference call. (The Washington D.C.-based advisors to ROD BLAGOJEVICH are believed to have participated on this call from Washington D.C.). Various individuals participated at different times during the call. The call lasted for approximately two hours, and what follows are simply summaries of various portions of the two-hour call.

At this point, November 10th, Blagojevich is obviously aware of Valerie Jarrett’s (“Candidate 1’s”) prospective interest in the position. However, it would also appear that to this point, Blagojevich had not yet asked for any sort of quid-pro-quo in exchange for her appointment. Hence, the language that Blagojevich “should ask the President-elect for something”.

Blagojevich, certainly, is highly frustrated by the situation. That could represent any number of things — perhaps Blagojevich recognizes that it will be very difficult to wring anything out of Obama, a conclusion that one could reasonably come to without actually having asked anything of him. Obama’s having signaled his support for Jarrett is a nuisance to him; Blagojevich would rather be left to his own devices, free to play the various candidates off of one another.

The next day, Blagojevich comes up with an idea: perhaps a 501(c)(4) can be set up for him; presumably he could gain money and stature by being the chief executive of such a 501(c)(4). (A 501(c)(4) is a nonprofit interest group; examples include the AARP and the NAACP, although others are more overtly partisan). Perhaps the 501(c)(4) idea is something that can be peddled to Obama without seeming too overtly corrupt, something closer to the ‘favor’ end of the spectrum than the ‘bribe’ end.

Also note that Blagojevich is at least somewhat aware of his need to use discretion. In a subsequent conversation about a different candidate (“Candidate 6”), he suggests that he would be uncomfortable expressing the 501(c)(4) idea directly to the candidate, and seeks an intermediate.

106. On November 12, 2008, ROD BLAGOJEVICH talked with JOHN HARRIS. ROD BLAGOJEVICH noted that CNN is reporting that Senate Candidate 1 does not want the open Senate seat. HARRIS said he thought that is just a tactic.

The following day, Blagojeivch hears reports that Jarrett is not interested in the Senate seat (Ed — These reports were circulating as early as November 10th). Nevertheless, he arranges a phone call with “SEIU Official”, believed to be Andy Stern, whom he had also spoken to a week earlier. In this conversation, Blagjoveich brings up the idea of the 501(c)(4). However, he does so somewhat obliquely, not expressly discussing the idea in terms of a quid-pro-quo.

Apparently feeling uncertain about whether Stern got his message, the next day Blagojevich brings up the idea of discussing the 501(c)(4) idea directly with an adviser to President Obama (which Stern is not). Blagojevich understands that any such discussions would need to be very discreet (“it’s unsaid, it’s unsaid”; “this has nothing to do with anything else we’re working on”) and involve several degrees of separation between him and the transition team (his adviser would call an intermediary, who would then call the Obama adviser, whose rank or title isn’t known).

The complaint never says whether this conversation actually took place. One day later, however, on November 14th, Jarrett is named to the White House staff, rendering any further discussions moot.

So what did the President-elect’s team know? Perhaps not a whole lot. We know that Blagojevich had at least two conversations with an SEIU official, probably Andy Stern; Stern is certainly well-connected, but has no formal role with the Obama transition team. In the second of these conversations, Blagojevich broached the idea of setting up a 501(c)(4). He does so somewhat discretely, only loosely tying it to Jarrett, whom at that point may already have become disinterested in the Senate seat. Within 48 hours, Jarrett is named to the White House staff, effectively removing her from consideration for the Senate.

And that’s really all that we know. It’s certainly possible, and maybe somewhat probable, that there were other conversations outside of what is described in the criminal complaint, but at that point we’re just guessing: there is no specific allegation that Blagojevich had any direct discussion with a member of Team Obama.

So to answer Tapper’s questions:

Then there’s the big question about how Blago was so sure — so angry — that Team Obama would not pay to play.

Perhaps because Obama’s the fraking President-elect and you don’t shake down the President-elect. That’s not something you should need to be told. Behind the scenes, Blagojevich dreamed of being omnipotent, but he may have recognized his impotence when it came to Obama; that is something that would have made him angry.

Who in the Obama Team was talking to the Governor’s office?

Andy Stern was talking to Blago. Andy Stern is close to Team Obama, and pretty much everyone else in the “new” Democratic Party, but he isn’t a part of Team Obama. (This is probably no accident. For any number of reasons — for instance, not wanting to upset his colleagues in Illinois by lobbying against their ascendancy to the Senate — it might have been useful to Obama to have some insulation between the transition team and Blagojevich.) It’s not clear from Fitzgerald’s complaint that Blagojevich had conversations with anyone but Stern about Jarrett, although he was certainly contemplating doing so.

When they found out that Blago wanted to quid pro quo Team Obama (Jarrett gets the Senate seat if Blago gets a Cabinet position, or a good-paying job with a union-affiliated organization, or his wife gets a seat on some corporate boards) what did they do?

Tapper is confusing what Blagojevich discussed with his kitchen cabinet with what he discussed with Stern. Some of the more labyrinthine schemes that he and his advisers hatched would have sounded crazy — the only idea that we know he broached with Stern was that of the 501(c)(4), and he did so very discretely.

Blagojevich is an imbecile, but he has at least some street smarts, or he would not have gotten as far as he did. It’s not like Blagojevich picked up the Red Phone, called David Alexrod, and demanded to be Secretary of State. That doesn’t make him any less guilty, but one needs to remember that it’s the FBI that was tapping Blagoveich’s phone, and not the President-elect.