The new ABC/Washington Post poll will undoubtedly get a lot of attention for its findings about health care, Sarah Palin, the Tea Partiers, and whether or not Americans think Republicans should obstruct President Obama’s agenda. But there’s a little nugget in there–see question #28–that reflects a common and very durable finding about Americans’ attitudes toward government spending: They believe that more than half of what the government spends–53 cents was the average answer–is “wasted.” More than half! 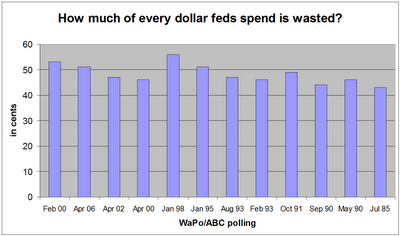 Maybe I need to get wasted before I try to unpack what, exactly, the belief that the US government wastes half of all its revenues really means. But before we get to what we don’t know, here’s what we do know, but I’m embarrassed to admit I had not know about until today: For the past two decades, though increasing slightly, this half-is-waste figure has remained more or less the same, ranging since 1991 between a low of 46 percent and a high of 56 percent in the ABC/Post poll. That means for the past twenty years–including all four combined terms of the Bill Clinton and George W. Bush presidencies and one year into Obama’s term–on average Americans believe one dollar out of two raised and spent is wasted. Gallup polling over the same period echoes this finding.

The possibilities for what makes government “wasteful” are many, but it seems to me waste can be reduced to three non-exclusive types:

1. Ineffective spending: Spending on programs that do not work;

2. Inefficient spending: Excessive spending or overhead/overpayment on programs that do work; and/or

3. Inappropriate spending: Efficient and effective spending on programs that the respondents normatively view as something the government shouldn’t be involved with in the first place.

So, as an example of Type 1 waste, some citizens undoubtedly view certain welfare spending as ineffective because it doesn’t eradicate poverty, while others view certain types of defense spending as ineffective because we have weapon systems to defend against threats more imagined than real. As a Type 2 example, even citizens who support welfare or defense spending probably think that red tape, high salaries and pensions and other federal employee benefits, complex billing protocols, duplication of effort, outright fraud (by government officials and/or programmatic beneficiaries) and other bureaucratic problems as inefficient overhead. Type 3 waste might be something that the government does effectively and efficiently, but citizens believe they shouldn’t be doing, like subsidizing corporate marketing abroad in the eyes of liberals, or providing services to illegal immigrants for conservatives. Of course, a citizen who believes the government should not be involved in some policy area and thinks what the government spends on that policy isn’t doing any good anyway and believes the feds are spending that money inefficiently, might view federal spending as wasteful on all three counts.

What’s infuriating is that pollsters do not plumb a bit deeper to get at the underlying causes behind these views. According to one recent Rasmussen Reports study, high government salaries–Type 2 waste–has something to do with it. But surely Americans can’t believe that government waste is simply the result of too many overpaid workers leaning on their shovels or gossiping at the water cooler.

I don’t know about randomly-selected Americans, but I do know that undergraduates in my POLI 100 classes tend to think the government spends more on defense than it does and less on Medicare and Social Security than it does. In surveys, the median American thinks that we spend about 20 percent of the federal budget on foreign aid, and would like that amount reduced to about 10 percent–when, in fact, actual spending amounts to less than one percent. This may explain why some Americans foolishly believe that tort reform will solve our health care cost problem or that eliminating earmarks will eliminate our deficit problem, even though they will not. I know I’m going to sound like an elitist, but the fact of the matter is that most Americans have a very weak grasp of how the government raises revenues and what it spends those monies on.

Given the misinformation or false perceptions, I think it safe to assume that Americans believe there’s not just a lot of Type 2 waste–governments just being inefficient bureaucrats and all that–but a significant amount of Type 1 and Type 3 waste. That is, the believe the feds are doing a bunch of stuff not very well, or doing stuff well it shouldn’t be doing at all, like sending more money abroad for foreign aid than it spends at home on Social Security, even though the ratio between OADSI and foreign aid, depending on the estimate, is somewhere between 30-to-1 and 50-to-1. I wish pollsters would ask whether and to what degree spending on Social Security or Medicare payments is wasted.

And although the share of Americans who think we are spending too much on defense has been rising over the past decade, presumably in response to rising spending levels, I wonder how many Americans would categorize our defense spending as “wasteful.” Even though we spend more on defense than all other nations combined–timeout: imagine how quickly Sean Hannity’s head would explode if that were true of social spending–I suspect defense and security spending has a certain “inelastic quality” to it and, frankly, it’s politically incorrect for respondents to say money spent on defense, and specifically the subset of funds spent directly on troops or veterans, is “wasteful.”

So where’s all the “waste” in a federal budget that, in regular economic times, is about two-thirds comprised of Social Security, Medicare, defense and interest payments? I’d really like to know how Americans do the math on that 53 cents. Or maybe, on the other hand, I’m afraid to find out.