Last week three auctions of Treasury securities did not go as well as hoped:

Demand waned at this week’s auctions of two-, five- and seven-year notes as signs of improvement in the economy boosted appetite for higher-yielding assets.

At the $32 billion seven-year note sale on March 25, investors bid for 2.61 times the amount of debt on offer, the least in 10 months.

The $42 billion auction of five-year debt a day earlier drew a yield of 2.605 percent, compared with the average forecast of 2.556 percent in a survey of eight of the Fed’s 18 primary dealers. The difference of 4.9 basis points was the largest since July, based on Bloomberg surveys.

Investors bid for 3 times the $44 billion of two-year notes sold on March 23, the lowest since December’s sale.

These numbers are nowhere near Armageddon levels, but they are concerning because they came in lower than expected. In addition, consider these two charts:

The top chart is the IEF — an ETF that represents the 7-10 year Treasury market. The lower chart is the TLT and it represents the 20+ year Treasury market. Both have formed a multi-year “head and shoulders” pattern. It’s highly likely that Treasury prices are heading lower, leading to rising interest rates. Finally, consider this chart from the St. Louis Federal Reserve of the 10-year constantly maturing Treasury yield: 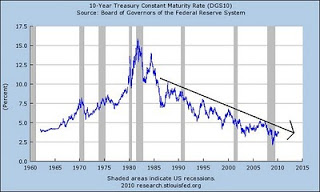 The Treasury market has been in a 20-year bull market. However, yields are incredibly low (they are currently just below 4 percent) which means realistically they only have one direction to go – namely, higher.

So — does all of this add up to increasing interest rates? The answer is most likely yes. But it’s important to ask the next question — why are interest rates rising?

The answer is more nuanced. First, look above at the charts of the IEF and TLT. Both prices spiked at the end of 2008 and into 2009. The reason for this price spike is the safety bid — that is, the stock market was dropping (in the last half of 2008 and first quarter of 2009 the SPYs dropped from ~120 to ~70 or approximately 41%) and investors were concerned about a possible depression so money moved into government debt which is the safest investment possible. In addition, the credit markets literally froze at the end of 2008 (see below), increasing the need for safety. But, since early 2009, stocks have rallied which indicates investors are more comfortable investing in riskier assets. This lead to money flows out of safer investments like Treasury bonds leading to the sell-off.

Adding further pressure to Treasury prices is the fact that credit markets are far more stable now. Consider the following:

The liquid, high grade corporate bond market has done well over the last year. While it broke the uptrend (A) it has moved in a sideways consolidation pattern for the last six months. There are two lines of support B and C.

The junk bond market is in the same boat. While it has broken the uptrends of A and B, it is currently moving sideways and has support at C and D. 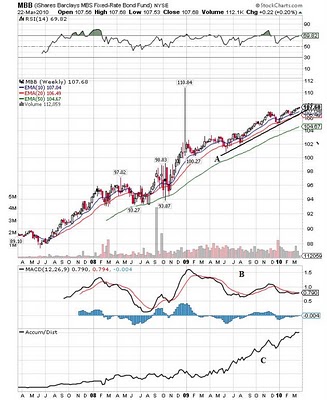 The mortgage backed market is also in an uptrend (A). While momentum is neutral (B) there is plenty of money going into the market (C). Also note the Fed is nearly done with its purchase programs:

Mr. Bullard also said that though the Fed is on track to end its $1.25 trillion purchase program for mortgage-backed securities, it continues to leave open the option of returning if the housing market needs it.

The Fed has pared down its weekly purchases to about $10 billion, from a high of $25 billion to $30 billion at its peak. The central bank has $14 billion left to purchase in the next couple of weeks, according to latest data from the central bank.

“Yields haven’t opened up, and we don’t expect much to happen at the end of month, or at the end of program,” he said. “All indications are that it’s going to be a seamless transition.”

Despite the approaching end of this program, the bottom hasn’t fallen out of the MBB market. And finally, the A2/P2 spread has come in and has been stable for some time:

The easing of the credit markets should be analyzed against the backdrop that the Federal Reserve has largely ended all its extraordinary measures to support the credit markets: From Ben Bernanke’s testimony earlier this week:

Broadly speaking, the Federal Reserve’s response to the crisis and the recession can be divided into two parts. First, our financial system during the past 2-1/2 years experienced periods of intense panic and dysfunction, during which private short-term funding became difficult or impossible to obtain for many borrowers. The pulling back of private liquidity at times threatened the stability of financial institutions and markets and severely disrupted normal channels of credit. In its role as liquidity provider of last resort, the Federal Reserve developed a number of programs to provide well-secured, mostly short-term credit to the financial system. These programs, which imposed no cost on taxpayers, were a critical part of the government’s efforts to stabilize the financial system and restart the flow of credit to American families and businesses. Besides ensuring that a range of financial institutions–including depository institutions, primary dealers, and money market mutual funds–had access to adequate liquidity in an extremely stressed environment, the Federal Reserve’s lending helped to restore normal functioning and support credit extension in a number of key financial markets, including the interbank lending market, the commercial paper market, and the market for asset-backed securities.

As financial conditions have improved, the Federal Reserve has substantially phased out these lending programs. Some facilities were closed over the course of 2009, and most others expired on February 1. The Term Auction Facility, under which fixed amounts of discount window credit were auctioned to depository institutions, was discontinued in the past few weeks. As of today, the only facility still in operation that offers credit to multiple institutions, other than the regular discount window, is the Term Asset-Backed Securities Loan Facility (TALF), which has supported the market for asset-backed securities, such as those backed by auto loans, credit card loans, small business loans, and student loans. Reflecting notably better conditions in many markets for asset-backed securities, the TALF is scheduled to close on March 31 for loans backed by all types of collateral except newly issued commercial mortgage-backed securities (CMBS) and on June 30 for loans backed by newly issued CMBS.

In addition, the Federal Reserve has been normalizing the terms of regular discount window loans. We have reduced the maximum maturity of discount window loans from 90 days to overnight for nearly all loans, restoring the pre-crisis practice. In mid-February the Federal Reserve also increased the spread between the discount rate and the upper limit of our target range for the federal funds rate from 25 basis points to 50 basis points. We have emphasized that both the closure of our emergency lending facilities and the adjustments to the terms of discount window loans are responses to the improving conditions in financial markets. They are not expected to lead to tighter financial conditions for households and businesses and hence do not constitute a tightening of monetary policy, nor should they be interpreted as signaling any change in the outlook for monetary policy.

And finally, there is the ending fear of a double-dip recession:

Huge Treasury supply is a definite, and ongoing, concern. But at least part of the weakened appetite for Treasuries is a matter of the fading of those stubborn fears of a “double-dip” in the economy. Investors ought not to wish for the economic conditions that would cause rates to fall from today’s levels, let’s remember. In fact, the stock market seems to “want” incrementally higher rates if they come for the favored reasons — firmer economic activity and waning risk aversion.

The above information indicates the primary reason for the bond market sell-off is a healthier economy — meaning, the credit market has de-thawed and investors are more interested in taking on higher levels of risk. Therefore, investors are pulling money out of the bond market and investing in riskier assets such as stocks, corporate bonds and junk bonds.

Mike Santolli of Barron’s (cited above) mentions the second reason for the dropping prices: increased Treasury supply. The US has a large budget deficit. To fund that deficit it has to issue an increasing amount of debt. At some point, the US will have to offer a higher interest rate (and a lower price) to attract buyers. Is that happening now? To an extent, but right now it’s not the dominant factor. While the dropping bid-to-cover ratios and offering yields of last week’s auctions are bad news, they are not dropping to anywhere near panic levels. The evidence indicates what we are primarily witnessing in the bond market is a return to a healthier financial situation — risk appetite has returned leading to the movement from bonds to stocks. This is a standard move in the financial markets in the early stages of a recovery (for more information, I would highly recommend reading John Murphy’s Intermarket Analysis; Profiting From Global Market Relationships).

Finally, note this graph of expenditures at the federal level: 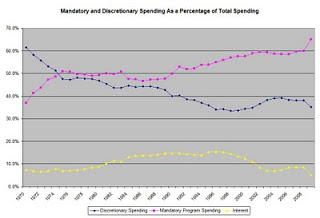 Interest payments account for less than 10% of federal expenditures. Simply put, we have a fair amount of room in the federal budget for interest expenditures.

In conclusion, we are seeing a move to a healthier economic environment where investors are more comfortable taking on more risk. That is the primary reason for the increase in long-term interest rates.