I decided to take that perception and put it to the test. Below are charts for the last five recessions, along with the preceding three to four quarters and the first three to four quarters after the recession ended. The dates for the recessions are from the National Bureau of Economic Research and the charts are from the St. Louis Federal Reserve. All the GDP data has been adjusted for inflation. 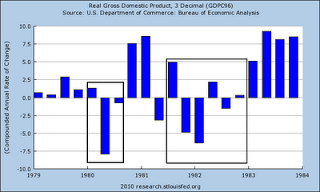 I’ve included both of these periods in the same chart for convenience. First, notice the period of four quarters leading up to the first recession showed incredibly slow growth. The quarter to quarter rate of growth for this period (1Q79 to 4Q 79) was .7%, .4%, 2.9% 1.1%. respectively. This was followed by three quarters of recession, during which the first quarter showed positive growth. Then came the brief recovery where we saw two quarters of incredibly strong growth and a third quarter of contraction. This was followed by the second recession during which we had two quarters to non-sequential positive GDP growth. Coming out of the recession we had incredibly strong rates of growth beginning in the second quarter after the end of the second recession.

There are several points that need to be made about this period. First, there were four years of incredibly difficult times, during which we had two recession (or perhaps one long recession). Either way, this was an extended period of difficulty for the country. Secondly, the four quarters before the recession showed incredibly slow economic growth. Growth at this pace probably felt like a recession to the country. Third, there were quarters of growth during the recession, indicating not all the events during these periods were bad. 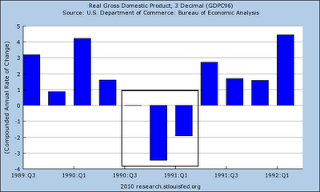 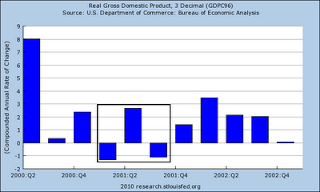 As the chart shows, this was a very shallow and short recession, lasting less than a year during which there were two quarters of negative growth. The contraction was very mild, with the first quarter of 2001 contracting 1.3% and the third quarter contracting 1.1%. But notice the two preceding quarters were also very weak and the five quarters after the recession ended were also very weak. The above chart shows 10 quarters or two and a half years of very weak growth. In other words, the official recession dates cover some of the downturn, but certainly not all of it. 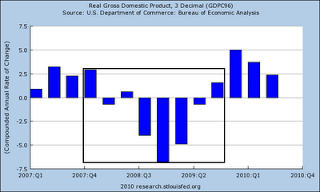 First, the NBER has not officially dated the end of the last recession. However, the St. Louis Fred’s system uses July 2009 as the end point, which would be the first quarter of positive growth after four quarters of contraction. This falls in line with general previous NBER methodology. In addition, the economy has had four quarters of positive GDP growth — a statistic that has never been classified as a recession.

2.) The 1990/91, 2001 and current recessions saw 10 quarters of weak growth, indicating the official dates of the recession only tell part of the economy story.