Last week, I noticed two teenagers loitering outside an IKEA in New Haven, Connecticut, smoking. The only difference between now and what I might have seen five years ago was that the cigarettes were electronic.

Seemingly overnight, smoking e-cigarettes has become popular. This growth has generated an active policy debate on regulation. Those who would like to ban e-cigarettes say that we don’t have enough information on their risks, and that the availability of this technology will compel more people to smoke, creating adverse public health effects. Those who champion e-cigarettes say that their risks are likely to be a lot smaller than the risks of traditional cigarettes; if this is true, then it may be good policy to accept some total increase in smoking in exchange for safer products.

Making policy here requires understanding more about everything having to do with e-cigarettes: the benefits, the health risks and the impact on smoking overall. The problem is that the research on e-cigarettes so far is mixed, and we may not know enough yet to make any policy decisions.

E-cigarettes, which are battery-operated devices, are loaded with a liquid cartridge containing a synthetic substance called propylene glycol, nicotine (usually) and flavorings (sometimes). The idea is to deliver nicotine in a way that approximates the experience of smoking (something a substitute like nicotine gum does not) but without the tar and many carcinogens found in traditional cigarettes.

E-cigarettes were originally developed as a smoking-cessation aid, meant to encourage people to switch to something that’s arguably less harmful and then wean them from it. But the evidence on the e-cigarette as a quitting aid is mixed. Some studies report that people who use e-cigarettes say the devices helped them quit smoking, but in many cases these studies poll from e-cigarette enthusiast websites, which could be biased. And the evidence from randomized controlled trials is inconsistent.

At least one small-scale (40 people) randomized controlled trial showed a 50 percent reduction in traditional cigarette use and 25 percent quit rate among those who were given e-cigarettes. But two larger trials showed more limited results — fewer than 10 percent of those given e-cigarettes quit at six months, in the first study, or at a year, in the second study. The quit rates were similar for nicotine e-cigarettes and for the placebo treatment (e-cigarettes without nicotine).

On the other hand, e-cigarettes are not risk-free. Nicotine is generally thought to have health risks of its own, although it’s hard to isolate those risks because researchers typically study nicotine in traditional cigarettes. Propylene glycol, the other major ingredient in e-cigarettes, is something we know relatively little about, but as with any chemical it could have its own health risks. And on top of this, the liquid in e-cigarettes could contain other contaminants.

In the end, where e-cigarettes fall on the continuum between “harmless” and “as bad as regular cigarettes” is a bit unclear. The biggest uncertainty — at least in my reading — is the risk from propylene glycol.

There remains the significant medical and policy concern that the availability of these products will increase total cigarette use. The laws of supply and demand mean there almost certainly will be at least some increase in smoking with the wider availability of e-cigarettes.

E-cigarettes are much easier to use than traditional cigarettes in several ways. They don’t make you smell, there are fewer restrictions on where you can use them, the second-hand smoke they produce is arguably less bad for other people, and they come in flavors. In terms of dollar cost, e-cigarettes are similar to traditional cigarettes. Considering these things together, the overall “price” of smoking has declined now that e-cigarettes are on the market. Because demand for products goes up when prices go down (this is called the “law of demand” and, yes, it basically always works), we should expect an increase in total smoking.

To get a handle on how much the availability of e-cigarettes will change demand for smoking, I went to the National Tobacco Survey of Youths, which asked middle and high school students about their e-cigarette use in 2011 and 2012.1 This is a good population to examine because the youth surveyed are of the age when most long-term smokers start smoking. The chart below shows the changes in e-cigarette use and overall smoking in the two groups between the two surveys. 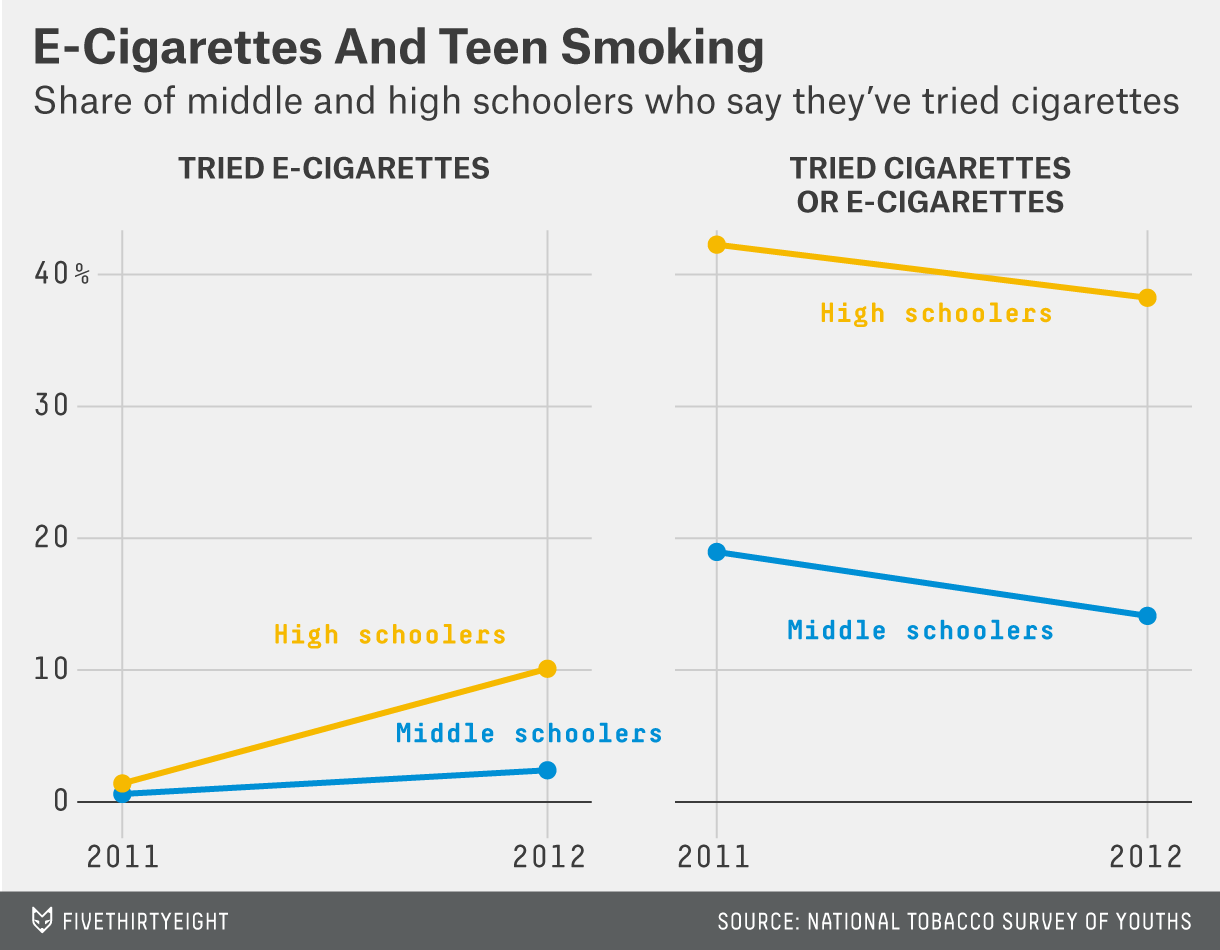 As others have noted, the chart on the left shows a huge change. Very few young people had tried e-cigarettes in 2011. By 2012, the figure was 10 percent of all high school students surveyed — and it was almost 14 percent if we look at 12th-graders.

You might find this worrisome on its face, but the share of students who report trying any type of smoking (traditional or e-cigarettes) declined between 2011 and 2012, as the chart on the right shows. The charts only show data from 2011 to 2012 because that’s when the survey first asked about e-cigarette use. However, when we look back to 2009, overall smoking was falling, and fell more steeply even as teens started to try e-cigarettes.

This most recent data here is from 2012. Time (and more survey data) will tell how much the innovation of e-cigarettes increases smoking demand. So far, it’s fair to say the effect is small.

In the end, policymakers face a complicated calculus. How much of an increase in total smoking are they willing to accept in exchange for some of that smoking to come from lower-risk e-cigarettes? Regulation of e-cigarettes (i.e. restricting their use in the same way as is common for traditional cigarettes) is likely to mitigate any possible increase in demand, but it may also limit the number of smokers switching from traditional cigarettes. The health risks are murky, the demand effects are murky, and even if both were known, the right policy decisions would not be clear.